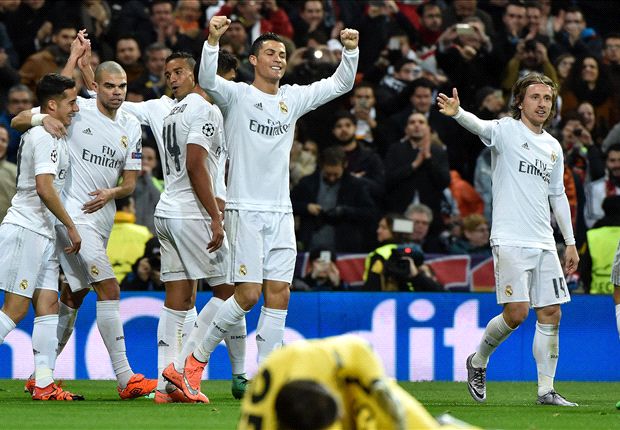 Four teams are through to the next round in the Champions League. Not many upsets in the midweek games as Real Madrid, PSG, Benfica and Wolfsburg defeated their respective opponents to claim a spot in the quarter-finals.

Real Madrid grabbed a comfortable 2 – 0 victory over AS Roma at the Santiago Bernabeu to win 4 – 0 on aggregate. Roma created many chances in the first half, but the forwards Edin Dzeko and Salah failed to put the ball in Keylor Navas’ goal. In the second half, Cristiano Ronaldo and James Rodriguez stepped up and netted one each for Los Blancos.

Paris Saint Germain traveled to Stamford Bridge with a 2 – 1 lead from the first leg. On Wednesday, Rabiot gave the visitors an early advantage with his 16th minute strike. However, Diego Costa grabbed an equalizer before the half hour mark to keep Chelsea in the game but Zlatan Ibrahimovic’s second-half goal wrapped up the game for the French champions.

Laurent Blanc was pleased with his side’s victory. The Frenchman also said that he expected the Blues to show more fighting spirit.

“We were preparing for a tough match, and we were right to do so,” Blanc said.

“We didn’t necessarily think we were able to put in such a good performance away from home, so that is very pleasing.

“We controlled the game, and that allowed us to have an easier night than we perhaps expected to.”

He added: “Angel Di Maria gave Chelsea a problem from start to finish. They never knew where he was, but we always knew where to find him with the ball.

“Zlatan performed at the level that he has been performing throughout this season. I don’t necessarily think it’s going to give him any more confidence.

“He has plenty of that as it is. He scored the decisive goal and laid on an assist.”

Zenit invited the Portuguese side Benfica after losing 1 – 0 in the first leg at Estadio da Luz. The Russian club drew first blood as Hulk scored in the 69th minute of the match. It was a stalemate until Gaitan scored the 85th-minute goal to give visitors the lead. Conceição sealed the victory in the sixth minute of injury time. After the win against Zenit, Benfica is now the 4th club with most quarter-finals qualifications in the Champions League history.

Wolfsburg reached the Champions League quarter-finals for the first time after Andre Schurrle’s goal sealed a 4-2 aggregate win over Gent. The German club had a 3 – 2 advantage over Gent from the first leg in Belgium.