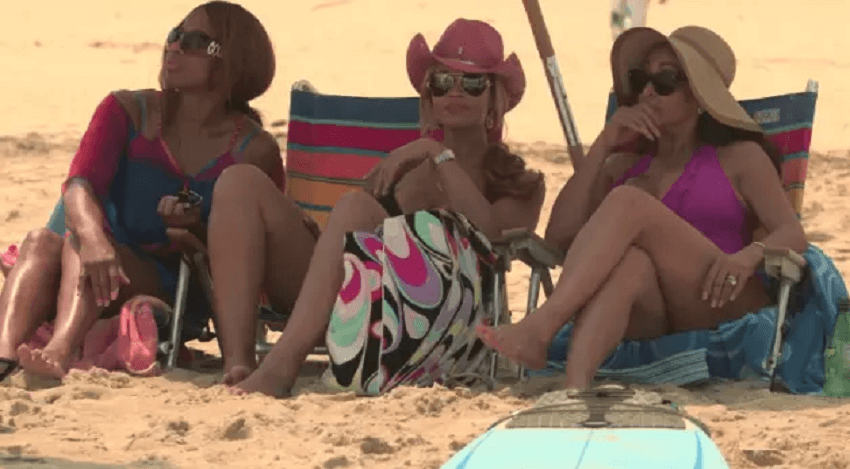 The Real Housewives of Potomac continued this week with its 6th episode, “Beach Session.” In this episode, young housewife Ashley tries to impress her new friends by inviting them to her beach house. Meanwhile, Katie tries to rally support for her charity, and the ladies reveal some of their troubling personal secrets.

The episode starts off with Katie meeting up with Ashley, Robyn, and Gizelle at the restaurant Gringos. Here, Katie talks about the Rost Foundation, which is a charity that she founded.  Katie is planning an upcoming gala and evidently has her sights set high for what she wants to achieve. Unfortunately, she doesn’t have much in terms of plans in place, as she still doesn’t know where it will be held or what the event will look like. Evidently the other women, who have plenty of party planning experience under their belts, aren’t all too impressed.

Shortly after, all of the ladies pack up and head out to Ashley’s beach house on the Delaware shore. Before even getting there several of the women express their lack of confidence in Ashley’s hosting abilities.

While Ashley’s house would impress the regular folk, the Real Housewives of Potomac are evidently not the regular folk. Robyn and Gizelle find out that they have to room together (albeit in two separate twin beds) and immediately Gizelle goes on a rampage. Gizelle winds up spending a good portion of the night searching up nearby hotels – which are all conveniently booked up. She ends up staying and says she feels she has been taken hostage by Ashley. Thus, right from the get-go, Gizelle already graciously gave Ashley the title of “worst host ever.” In addition, Charrisse also joined in on the stuck-up behavior, as she half-jokingly said she wasn’t going to sleep in the bed that was set out for her because her name was spelt wrong on the name place card (which Ashley put out knowing that there was going to be some drama with the sharing of rooms). Needless to say, although Ashley is adamant about climbing the Potomac social ranks, she is noticeably frustrated with how difficult the group of ladies can be.

The trip continues to spiral downhill when the next morning Ashley reveals that they are going to “get their surf on.” In the end, the surfers end up being Ashley, Katie and Robyn, while the other ladies sit on the sidelines drinking martinis and complaining about every possible thing – including Ashley’s “tramp stamp.” Karen criticizes Ashley and states that Ashley should have planned more suitable activities that would accommodate the whole group. By the sounds of things, anything that Ashley planned would have been viewed as unsuitable by the “older” members of the Potomac elite.

Later on, during the beach getaway, the ladies chow down on some grilled crab. While dining, the conversation surprising encompasses on using the bathroom and passing gas while in front of your significant other. I am not too sure if this falls under the category of proper conversation in the Potomac etiquette rulebook, but I guess if the women are talking about it we have to assume it is. The conversation then transitions to once again talking about Katie’s PDA-filled night with her man Andrew. While Katie is clearing over discussing the topic, Gizelle straight up tells her that her behavior “is alarming.” In confession, Gizelle goes on to say that she feels something is wrong with her, and she just can’t put her finger on it.

The episode ends off with a more revealing conversation amongst the women. This begins when Robyn asks Charrisse about her decision to get a divorce. Gizelle points out that she believes divorce is a better decision than just staying married for materialistic reasons. This prompts Katie to reveal that her mother has been diagnosed with dementia and therefore she can vouch that money really doesn’t mean anything when it comes to the big picture. The money-talk triggers Robyn to break down and finally open up about her financial situation (which has been discussed briefly in previous episodes). Robyn confesses that she is struggling and even had a “best friend” steal money from her family.

You can catch more of the Real Housewives of Potomac when it airs next Monday, March 13 on Bravo.