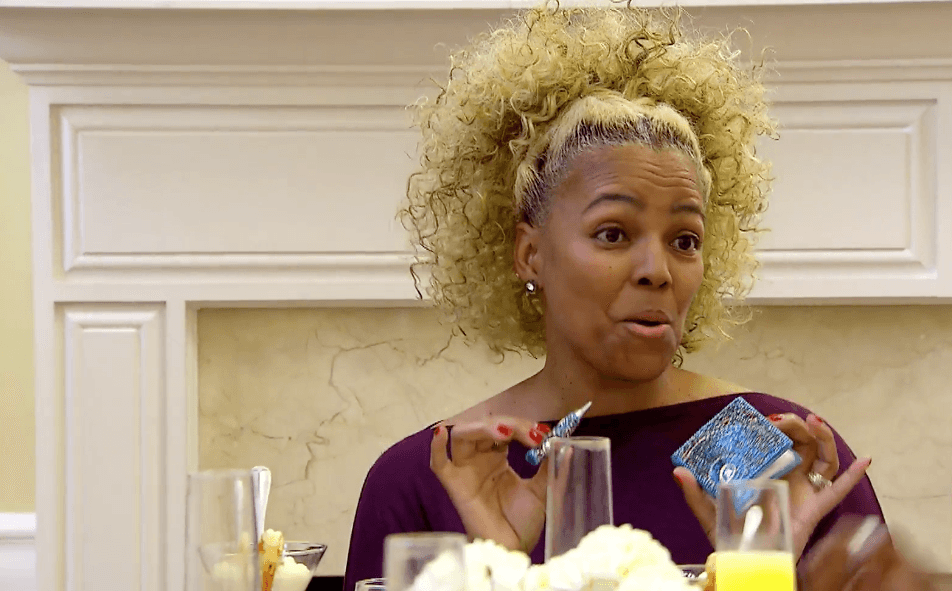 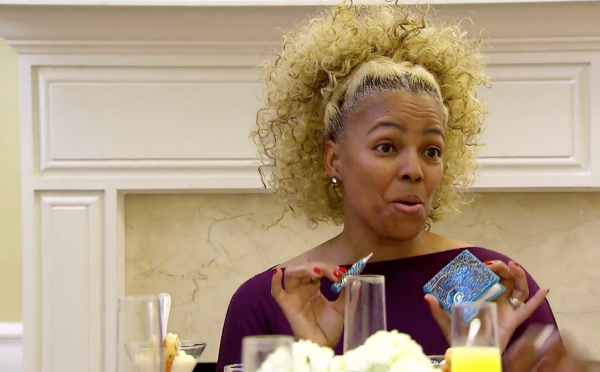 The beef between Kenya Moore and Kim Fields continues to heat up on the “Real Housewives of Atlanta.”

I know that there has to be conflict because essentially, that’s what the show is all about, but the feud between Kenya and Kim is forced. Or at least, that is what it seems like to me. But I get it because Kim is kind of boring and boring just doesn’t work on a reality TV show.

This week, Kim wants to do something special for the girls, so she plans a beatless brunch. Yes, that’s right, she wants the women of the RHOA to show up without any makeup. If you know how they roll, they are not feeling it AT ALL. While most of them agree to attend, none of them show up without makeup and Kenya, in particular, has a lot to say.

Let’s talk about Kenya. She makes it hard to be in her corner when she is always picking a fight. One week she is reeling over the realization that she will never have a relationship with her mother and the next week she is going head to head with other cast members over petty stuff. As far as the beatless brunch, she for one shows up with full makeup on because she is a “grown ass woman” and no one is going to tell her what to do.

She catches a ride with Kandi to the brunch, who wears light makeup herself, and tells her that if she didn’t pick her up, she would not go. They are the last ones to arrive, and the ladies have already started eating. Kim makes sure that everything is perfect because as she tells the caterer, these girls will talk about her too badly if the food is burnt. As they chat about Phaedra’s and the other ladies trip to Washington D.C., Kenya has to bring up how much she didn’t like the voicemail invitation Kim sent them because it insinuated that they hide behind their make up. Kim doesn’t really pay her any attention, dismissing her attempt at an argument, which pisses Kenya off. Porsha chimes in to say that some people are not confident enough to leave the house without makeup. Kim hears her and communicates that she was not trying to pass any kind of judgment. They get through brunch but not before Cynthia speaks to Kim and Kenya about working on the first commercial for her sunglasses line. Kenya, who clearly feels a certain kind of way about working with Kim says that she prefers they each pitch a concept to her, and then they go from there.

Now, the thing about Kenya suggesting to pitch their ideas to Cynthia is that she doesn’t follow through on it. In fact, she stands them up at the lunch meeting Cynthia arranges for them to talk about the commercial. Kim shows up and brings a great concept, which Cynthia loves. Kenya, on the other hand, doesn’t even let her friend know that she’s not coming. When Cynthia calls her because she’s late, Kenya tells her that she has too much going on with Moore Manor and need to reschedule. Way to show up Kenya.

While it is true that Kenya is working on her house, she is doing so with her newest love interest, Matt the trainer. He helps her get things together since he is good with his hands. Their love connection continues to grow and who knows, this could be “the one” for Kenya.

Other storylines this week include Kandi and Todd meeting with a nanny in preparation for baby Tucker. They also talk about taking shifts in an attempt to take care of the baby. Todd, who didn’t get to know his daughter until she was older, is in for a big surprise because parents are always on baby duty.

Phaedra works with Ayden to make a card for Apollo since it is his birthday. They use pictures and share a sweet moment. Along with allowing their children to have more phone time with their father, she has decided she is ready to go ahead with their divorce. It has been a little over a year since he went to prison and she feels it’s time to move on. Her lawyer asks if she has given any more thought to taking the boys to visit Apollo. Phaedra explains that she is still hesitant to do so and that she’d rather wait until he is moved to a more “child-friendly” facility.

Next week, the crew heads to Jamaica to film Cynthia’s commercial and for a little down time. No one is ready for the special surprise the hostess has for them-NeNe Leakes.