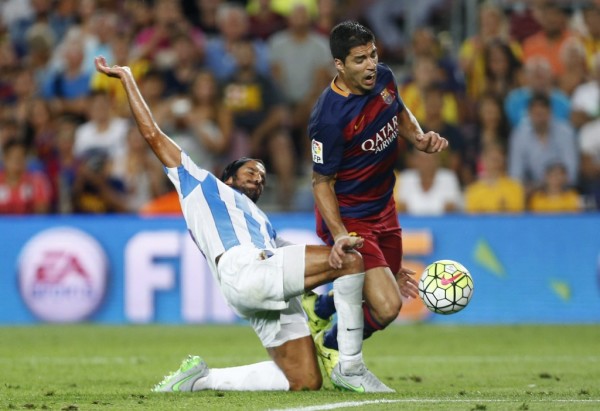 Barcelona picked up three points while the capital based clubs Real Madrid and Atletico Madrid drew at the weekend.

Barca defeated Malaga 1 – 2 away from home on Saturday. Lionel Messi scored the winner in the 51st minute with an acrobatic effort on goal. However, Malaga managed more attempts and shots on target (9) than the Catalan giants. Luis Enrique’s men have reclaimed the top spot in La Liga as they are now ahead of Atletico because of their superior goal difference. Barca also have a game-in-hand, winning which they can steer three points clear at the top.

Diego Simeone’s Atletico Madrid was held by Sevilla to a goalless draw at home. Sevilla boss Unai Emery got sent off by the referee during the ninety minutes at Vicente Calderon. Atleti head to Camp Nou next weekend to face the treble winners. This match will be very crucial to their chances of staying in contention for the title.

Real Madrid suffered another blow to their chances of winning the league. They drew 1 – 1 at Real Betis on Sunday. Betis’ Cejudo scored an incredible volley past Keylor Navas to earn a point for his side. Karim Benzema scored for Los Blancos in the 19th minute, but they were unable to find the winner before the referee’s final whistle. However, Zinedine Zidane was proud of his men despite a dent in their title hopes.

“I am very proud of what they did tonight, we’re just missing two more points,” said the Frenchman.

“We are on the right track, and we need to take the positives.

“It is clear losing two points is the negative thing, but there were some very good things tonight and we need to take those positives forward and fight until the end.”

“The truth is I didn’t expect (to drop two points), but football is like that, if you don’t take your chances anything can happen,” Zidane added.

“But given how we played, I can’t reproach the players for anything.”

Real Madrid centre-back Pepe was realistic about his side’s chances to preventing the European champions claiming a sixth title in eight years.

“It isn’t impossible, but it has become more difficult, and it is a bit further out of our reach,” he said.

“We need to keep working as a team and try to get the idea of what Zizou wants as quickly as possible.”

Valencia hasn’t won a game in La Liga since the November’s 5 – 1 win over Celta Vigo. They have now reached the 11th position in the league table after suffering their tenth draw of the season at Deportivo La Coruna. After the 1 – 1 draw on Sunday they have extended the distance between them and the sixth-placed Eibar to eight points. A Europa League finish seems unlikely at this point but with 17 matches still to be played, they have a good chance.

Levante, Gijon and Las Palmas are currently struggling in the relegation zone, but they aren’t much further away from safety as a lot of teams are close to the danger line.