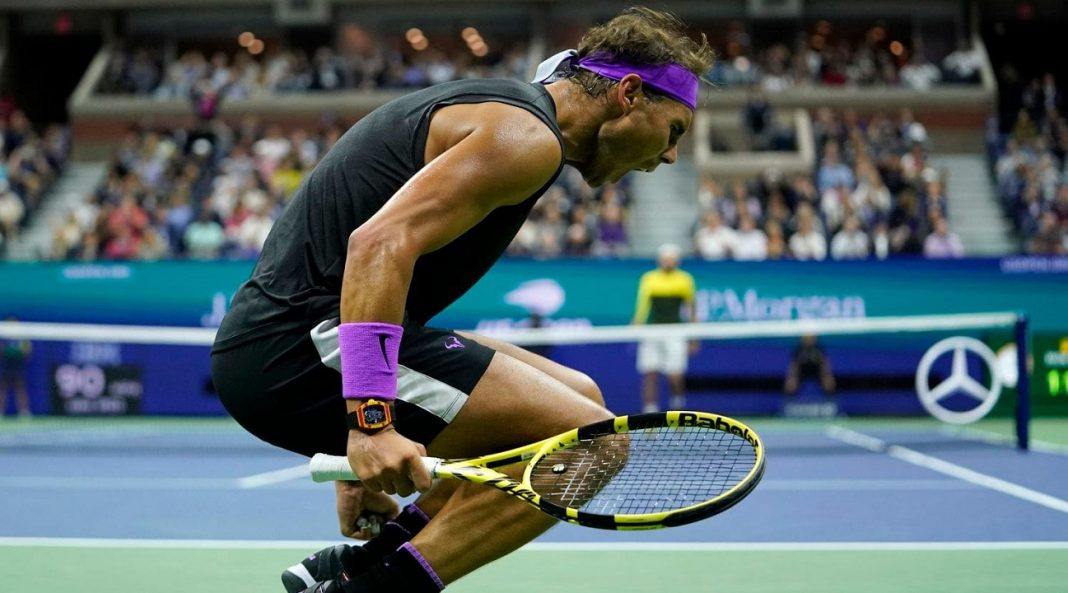 Rafael Nadal is more than making up for any past injuries this year at the 2019 U.S. Open. He knocked out Berrettini and will take on Daniil Medvedev in the finals on Sunday.

Rafa shrugged his shoulders once, twice, three times. If his words weren’t going to make his position clear, his body language would.

The question: Would he like to end up with the record for most Grand Slam titles won by a man? The answer, essentially: Yes, of course.

And if he doesn’t?

“I would love to be the one to have more, yes, but you cannot be all day frustrated or all day thinking about what your neighbor has better than you,” the 33-year-old Spaniard said after reaching the U.S. Open final to give himself a shot at another major championship. “You have to be happy with yourself. You have to do your way. If you are the one to achieve more, fantastic. If not, at least I give my best during all my career. That’s all.”

If he can beat Daniil Medvedev on Sunday at Flushing Meadows, Nadal will collect his fourth trophy in New York. Of more historical significance is that it would move him within one title of rival Roger Federer in the Slam standings.

Right now, Federer leads the way with 20, Nadal is next with 18 and Novak Djokovic has 16.

“I am happy about my career. I am very happy about what I’m doing. I’m going to keep working hard to try to produce chances,” Nadal said. “Sunday is one. It’s just one more chance, that’s all.”

In addition to his trio of U.S. Open triumphs, he already owns 12 titles from the French Open, two from Wimbledon and one from the Australian Open.

This will be the 27th Grand Slam final of the No. 2-seeded Nadal’s career, and the first for No. 5 Medvevev, as 23-year-old from Russia.

Medvedev had never been past the fourth round at a major until now.

“We’re going to prepare this like a normal match, because that’s how Daniil is thinking. I would not talk about ‘first final’ or stuff like that, because it won’t help him,” said Medvedev’s coach, Gilles Cervara. “If he’s in position to win the tournament, maybe he can feel some nervousness. But he’s totally able to manage this and to come on the court with his mind 100% ready to play his best tennis and to win the match.”

Medvedev has been doing a lot of winning lately, playing going 20-2 during the North American hard-court swing and reaching the final at each of his past four tournaments.

That includes a runner-up finish to Nadal at the Montreal Masters in August by a 6-3, 6-0 score.

“We have to try to do good things to beat him,” said one of Nadal’s coaches, Francisco Roig, who then added with a laugh: “I’m not going to tell you which things.”

What the 6-foot-6 (1.97-meter) Medvedev has grabbed the most attention for during the past two weeks is his interactions with the crowds at Flushing Meadows. During a third-round victory over Feliciano Lopez, he drew the ire of spectators for angrily grabbing a white towel from a ballperson and later holding up his middle finger against his face. They began booing during the match, then really let him hear it at the end. Medvedev basked in the jeers, antagonizing people even more by saying their negativity helped him win.

A similar scenario played out after his next win, too. Since then, Medvedev has been apologetic about his trolling and much calmer during matches, while playing deliciously defensive tennis that he can abandon to be more aggressive when he deems necessary.

He spoke about getting good preparation for facing Nadal by already having beaten three other left-handers in New York.

But taking on Nadal is an entirely different task.

Here’s the way Matteo Berrettini, the 23-year-old Italian who lost to Nadal in the semifinals, described what awaits Medvedev:

“He has a heavy forehand. Very fast backhand. His backhands gave me a lot of trouble. They arrived strong and fast. His serve is a shot that is underrated. Nobody says, ‘Nadal has a great serve.’ But it bothers you. He changes angles a lot. And he’s a lefty, so it comes with a different spin. And then, that first shot he hits after he serves hurts you.”

Those characteristics have carried Nadal to 18 Grand Slam championships so far. One more victory, and that’ll change to 19. And then, perhaps, Nadal can start to think about No. 20.

Rafael Nadal is as gracious and complimentary as can be whenever discussing an upcoming foe, so it came as no surprise to hear him talk up the player he’ll face in the U.S. Open semifinals Friday, 23-year-old Matteo Berrettini of Italy.

In this instance, though, the No. 2-seeded Nadal will not need to go through the toughest ones of all. That’s because he is the lone member of the Big Three still standing.

Novak Djokovic, the defending champion and No. 1 seed, stopped playing while way behind in his fourth-round match, citing a painful left shoulder.

Roger Federer, the No. 3 seed and owner of 20 Grand Slam titles, finished his five-set loss to 78th-ranked Grigor Dimitrov in the quarterfinals, but was clearly compromised by a problem in his upper back.

Win two more matches — against No. 24 Berrettini first, then against either Dimitrov or No. 5 seed Daniil Medvedev in the final — and Nadal would raise his major championships total to 19. That would allow him to move within one trophy of Federer’s record for men, and with time on his side: Nadal is 33; Federer is 38.

Nadal made it to the semifinals at all four Slams in 2019. His lone title from those tournaments came at the French Open, where he defeated Federer but did not play Djokovic. At the Australian Open in January, Nadal lost in the final to Djokovic. At Wimbledon in July, Nadal lost in the semifinals to Federer, who went on to lose a nearly five-hour final to Djokovic in a fifth-set tiebreaker.

Each of the past 11 majors has been won by one of that trio.

If anyone other than Nadal ends up holding the trophy Sunday, it would be the first time since Marin Cilic at the 2014 U.S. Open that there is a first-time Slam champion.

One of these really is not like the others.

Neither Berrettini, seeded 24th, nor Medvedev had ever even reached a major quarterfinal until this week. Dimitrov, the lowest-ranked semifinalist at Flushing Meadows since a 39-year-old Jimmy Connors was outside the top 150 in 1991, is 0-2 in past trips to the semifinals at Grand Slam tournaments.

Dimitrov’s resurgence is quite sudden: He used to be ranked No. 3 but has struggled with injuries and inconsistency.

“The past six, seven months have been pretty rough for me. But I had somebody to lean on — my friends, my family. I kept on believing again in the work, the rehab I had to put behind my shoulder, the exercise, the practice, fixing up the racket a little bit. There were so many things I had to adjust in such a small, but big, period of time,” Dimitrov said. “Next thing you know, you’re almost (at the) end of the year, you have a result like that. It’s pretty special to me.”

Berrettini and Medvedev, both just 23, have shown signs that this sort of thing could be on the way.

Medvedev leads the tour in wins this season and in appearances in tournament finals. He has a varied style that helped him make it to the title matches at three hard-court tuneups heading to New York.

Berrettini saved match points in the third round at Wimbledon to earn his Week 2 debut at a major, then ran up against Federer.

Now he takes on Nadal, someone Berrettini called “the greatest fighter ever in this sport.”

Serena Williams lost her temper and then lost the match when she played for last year’s U.S. Open championship.

The 37-year-old Williams has lost all three major finals she has reached since returning from giving birth, including to Naomi Osaka in Flushing Meadows last year. That match is best remembered for Williams’ arguments with chair umpire Carlos Ramos.

She remains one behind Margaret Court’s record for most Grand Slam trophies and seeks her seventh at the U.S. Open, 20 years after winning her first.

Andreescu, 33-4 this season, can become the first Canadian woman to win a Grand Slam title.