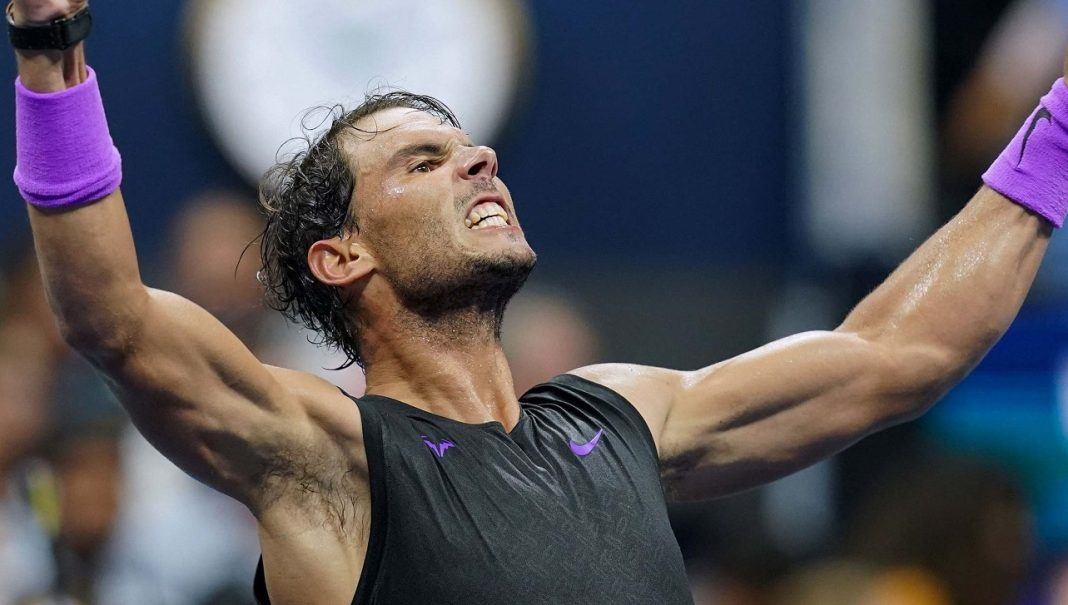 Rafael Nadal is all ready to take on Diego Schwartzman in the U.S. Open quarterfinals Wednesday night, and you can expect him to give the same inspiring performance he recently gave to golf legend Tiger Woods. For those hoping to see Rafa go up against Roger Federer in the finals, it wasn’t in the cards this year.

If Nadal beats Schwartzman, he will go on to tackle Matteo Berrettini in the semi-finals after his beating Gael Monfils in five very grueling sets on Wednesday. 3-6, 6-3, 6-2, 3-6, 7-6 (5) should have the Italian tennis player hyped and ready for the Spanish legend.

Locked in a tight test at the U.S. Open, Rafael Nadal conjured up an over-the-shoulder, back-to-the-net flick of a volley winner that he celebrated with a leap and punch of the air.

If that wasn’t the shot of the match, then surely this was, a couple of points later: a cross-court backhand passing winner off an overhead by his opponent, 2014 champion Marin Cilic, good enough to earn a yell and four fist pumps from Nadal — along with an uppercut from Tiger Woods in the Arthur Ashe Stadium stands. Then again, maybe it was the sprinting, sliding, bend-it-around-the-net-post forehand winner to get to match point, which Woods loved, too.

Nadal is looking healthy and hungry at Flushing Meadows so far, and he quickly broke things open against Cilic by seizing nine consecutive games for a 6-3, 3-6, 6-1, 6-2 victory in the fourth round Monday night.

Asked to explain that shot on the next-to-last point, Nadal chuckled a bit and said: “It’s easy to describe and difficult to make.”

The 33-year-old Spaniard reached his ninth quarterfinal in New York and 40th at all major tournaments.

The No. 2-seeded Nadal, who retired from his 2018 semifinal at the U.S. Open with a knee injury, will try to get back to the final four by beating No. 20 Diego Schwartzman in the quarterfinals. Schwartzman advanced earlier Monday by eliminating No. 6 Alexander Zverev 3-6, 6-2, 6-4, 6-3.

Nadal is attempting to claim his fourth U.S. Open championship and 19th Grand Slam trophy overall. Roger Federer holds the men’s record of 20 majors. The rivals never have played each other in New York; they only could meet in the finals this year. Sadly, that will not be this year as Federer lost to Grigor Dimitrov in the quarterfinals before a very stunned crowd 3-6, 6-4, 3-6, 6-4, 6-2. He didn’t go out easily, but his back caused some major problems for the Swiss maestro.

Against Cilic, who entered Monday with a 5-0 mark in fourth-round matches at Flushing Meadows, everything turned shortly after Nadal ceded a set for the first time in the tournament. As it is, he only had played two matches before this one, because his second-round opponent, Thanasi Kokkinakis, withdrew with a bad shoulder.

At 2-1 in the third set, with Cilic serving, Nadal came up with that no-look volley to begin things. After Cilic missed a shot, Nadal’s big backhand made it love-40. One double-fault later, that game was over — as, essentially, was the match.

They would go on to play for about another hour, and he managed to grab just two more games.

Rafael Nadal Makes Even A Simple Practice Into An Intense Experience

Rafael Nadal enters the court slowly, somberly, every ounce of him emanating stolid focus. He is locked in. One gets the feeling, watching him strut, that if he were to walk into a wall at this moment, it would be the wall that crumbles.

It is a look we see from him often, viewing him on court in a tense match.

But this is not a match. It’s practice.

It’s happening on the grounds of the United States Open, where Nadal has reached the quarterfinals in his drive for his 19th major title. It’s happening at noon on Tuesday, 14 hours after his late-night, four-set win against Marin Cilic — a contest in which he’d played with his hallmark hammering style from the first point to the last.

You’d think that on a day like this, an off day, a rest day, Nadal would relax.

He has never let up on a tennis court, whether it’s a final on Arthur Ashe Stadium or a session on Practice Court 5, the last in a row of dedicated warm-up courts at the Billie Jean King National Tennis Center, with looming stands constructed so anyone with a general grounds pass can easily view the players preparing for their matches.

No Grand Slam tournament makes it easier to view competitors in this kind of setting. There is also no real corollary at this level of sports. Imagine getting to see the Golden State Warriors run through their paces — working on their zone defense — in the middle of an N.B.A. finals series. Or going to batting practice at Yankee Stadium, only the Yankees are playing an intrasquad game and your ticket lets you sit 20 feet behind home plate.

At the U.S. Open’s practice courts, fans line the fences in deep rows to watch both the lesser-knowns and the biggest stars — from Nadal to Novak Djokovic, Serena Williams to Coco Gauff.

Take in enough of these sessions and it quickly becomes clear that nobody else treats practice with Nadal’s unquenchable seriousness.

Many of the other competitors go through their routines at half to three-quarter speeds. By contrast, Nadal’s pugilism is on full display. It takes just two or three minutes of easy hitting before his groundstrokes begin catapulting off his Babolat racket with a remarkable urgency.

Tuesday afternoon, as is often the case, there is nothing particularly complicated about his routine. He rallies with his coach, Carlos Moya, a former world No. 1, not long ago retired, who struggles mightily to handle Nadal’s pace.

The session lasts an hour. It is mostly Nadal uppercuts, up the gut of the court, and mostly forehands. Fans gasp as they take in the sight of 20 or 30 hard shots struck consecutively without a miss — balls hit all-out, often far harder than he would in a match — the rallies often followed by haymakers hit on the run, slicing against the sideline and out of Moya’s reach.

It’s like this again and again. Nadal simply can’t let up. Mats Wilander, the seven-time Grand Slam champion, on the grounds broadcasting the matches for Eurosport TV, describes the Spaniard’s practice routine as an act of exploration. “In practice, he’s searching constantly for the perfect shot, the perfect forehand,” Wilander says. “It’s like he always need to find it. To feel so comfortable with it that, emotionally, he can take risks” during the thumping stress of the biggest matches.

The sound of his shots reverberates through the stands and settles in the ears. It’s like an ax splitting a pine tree. “That sound, that sound, I’m never going to forget it,” says one of the throng of fans, Loreen Beaudry. “It’s just deeper than anyone else makes. The sound of ridiculous power.”

Here comes a backhand, then another and another, but they are followed by a long series of bolo punch forehands — five, then 12 — which he sends skidding through the air like Max Scherzer fastballs.

He does not smile. He does not look up at the crowd. He is drenched with sweat. His face. His legs. His orange hat. His gray shirt and gray shorts; like he’s walked through a carwash.

But he keeps going. Ten years ago, when he was 23, it would not have been shocking to see him on his toes between rallies during a practice like this, as his coaches scurried to scoop up balls. But time has its way. At 33, adjustments in routine must be made. Now, he moves more methodically as his team of coaches gathers for another round.

But not for long. Moya feeds him a groundstroke, and the hyperkinetic race begins again.

Fifteen minutes left: volleys, but not many.

Ten minutes left: serves, which he crushes to every corner.

And then returns, which, naturally, he also crushes to every corner.

It has now been a solid hour. The pros that were on the other practice courts when he began are mostly gone, but the fans are still there, watching his every move. Nadal speaks to his coaches. He does not exactly look pleased. Maybe the perfect forehand was not there today. Maybe he will have to find it Wednesday, in yet another long, concussive warm-up before his U.S. Open quarterfinal.