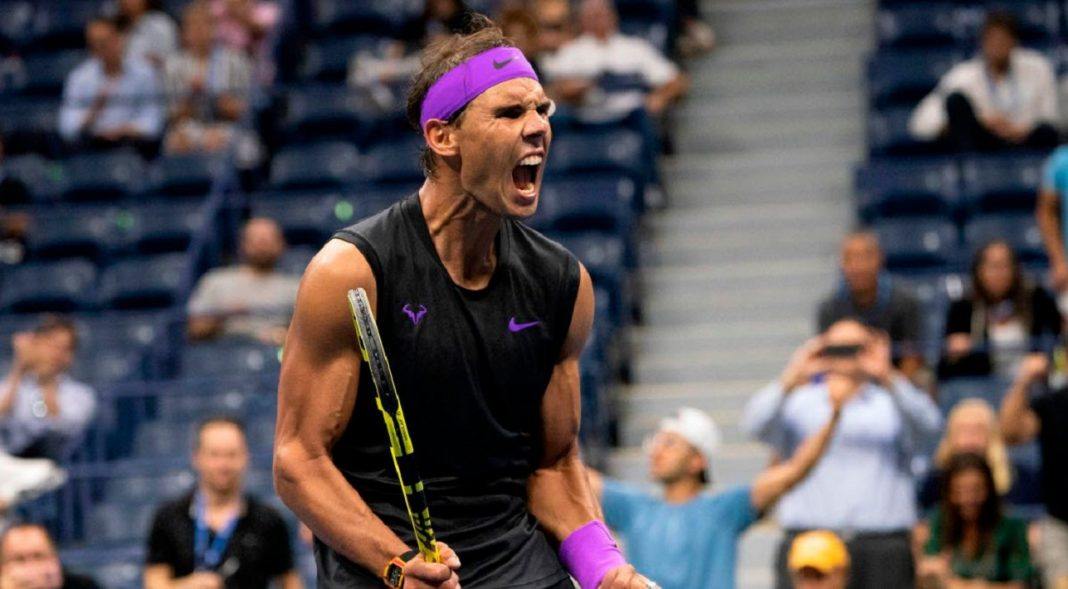 Rafael Nadal continues tearing through the U.S. Open in his determination to knock out Matteo Berrettini on Friday while pursuing Roger Federer‘s grand slam record.

“Today I make a step forward, in my opinion,” said Nadal in his on-court interview at Flushing Meadows.

“That match gives me confidence. Two matches in a row against two tough opponents.

“That’s a moment to increase a little bit more the level, and I really believe that I can do it.”

While Rafa can make it look easy, the quarterfinal was no walk in the park for the Spaniard as Schwartzman recovered two times from four-game deficits.

He also had to call the trainer for a problem with his left forearm early in the final set.

“I had some mistakes of course but I am super happy the way I accepted the challenge,” said Nadal.

“I just keep going point by point and here I am in the semifinals and that is super important for me. It means everything.”

Nadal kept pulling away in his U.S. Open quarterfinal, then getting reeled back in by Diego Schwartzman.

Took more than two hours just for those two sets. Eventually, both were claimed by Nadal. And so, ultimately, was the match and a berth in a 33rd Grand Slam semifinal for Nadal, who prevented Schwartzman from reaching his first by winning 6-4, 7-5, 6-2 after 12:30 a.m. Thursday in Arthur Ashe Stadium.

“Like a lion in the … jungle. He’s big. He’s a fighter. He knows how to play the important moments, every single time,” Schwartzman said. “I’ve played him eight times and every important moment, he played better than me.”

No wonder Nadal is 8-0 against the guy.

Roger Federer and Novak Djokovic are both out of the bracket, but Nadal is still around, meaning at least one member of the Big Three is in the semis at a 62nd consecutive major tournament. That trio has combined to win the last 11 Slam trophies — and Nadal is going to be heavily favored to make that 12.

None of the other men left has played in a major final, let alone won one. Nadal, though, is closing in on a fourth championship at the U.S. Open and his 19th at all majors, which would move him within only one of Federer’s record for men.

The other men’s semifinal will be No. 5 Daniil Medvedev of Russia vs. 78th-ranked Grigor Dimitrov of Bulgaria.

In the women’s semifinals Thursday, Serena Williams meets No. 5 Elina Svitolina of Ukraine, and No. 13 Belinda Bencic of Switzerland takes on No. 15 Bianca Andreescu of Canada.

Dimitrov won a five-setter Tuesday night against Federer, who was hampered by an issue with his upper back. Medvedev won his quarterfinal in four sets against Stan Wawrinka, who had built a big lead in the fourth round against Djokovic when the defending champion stopped because of pain in his left shoulder.

A year ago, it was Nadal whose body broke down: He retired from his semifinal against runner-up Juan Martin del Potro because of a bad knee.

This time, on a muggy night with the humidity above 50%, the left-hander raised some concern by having a trainer come out to rub a cream into that forearm during a changeover early in the third set. At the next changeover, Nadal flexed his right forearm and was visited again by the trainer, took a salt pill and guzzled some drinks, then shook that arm between points in the following game.

Afterward, Nadal said he had dealt with cramps late in the second set and early in the third.

“And then I took some salt, that’s all, and then it was over. The body is in good shape, I think. Not big problems,” Nadal said. “Just, of course, a little tired. Long day.”

Still, Nadal managed to play his best when it mattered the most against the 20th-seeded Schwartzman, an Argentine serenaded by loud choruses of “Olé! Olé! Olé! Olé!” by an audience that included former San Antonio Spurs star Manu Ginobili.

Nadal came up with a service break in the last game of each of the opening two sets, then the last one he would need made it 4-2 in the third and he broke yet again to end it.

“I don’t know how,” Schwartzman said, “but this guy is improving every time.”

Berrettini describes his mental coach as a big help and a best friend. They’ve been speaking on the phone before and after every match. And they certainly had plenty to chat about when it came to this latest victory.

Berrettini double-faulted away his initial match point and then needed four more to finally put away Monfils after nearly four hours.

“He told me, ‘I need to thank you, because I thought that everyone is born once and dies once. But during that match, I was born and died 15 or 16 times,’” Berrettini said about his conversation with the mental coach he’s worked with for several years. “I collapsed and got back up. I collapsed and got back up. That match point. Those other chances. I was down then I came back. It’s a great source of pride for me.”

In truth, the denouement was hardly a thing of beauty, with both men, clearly spent, fighting themselves and the tension of the moment as much as the guy on the other side of the net.

Monfils finished with 17 double-faults but managed to avoid any throughout the entire, exhausting fifth set until he served at 6-5 — and then he had three in that game, plus another two in the deciding tiebreaker, often doubling over between points to rest and catch his breath.

“A very bad day for me, serving,” Monfils said.

Berrettini acknowledged the obvious afterward, too, saying he felt “a little bit tight.”

It all was a bit of a whir.

“Right now, I don’t remember any points, just the (last) match point, you know?” he said. “I remember also the double-fault; I have to be honest.”

Nadal has now reached the semifinals of all four majors in the same year for the second time in his career.

While Nadal was one of the favorites to win the US Open ahead of the competition, following Djokovic’s retirement through injury and Federer’s shock quarterfinal exit, he is now cemented as the front runner to lift the trophy.

Despite all three members of the “Big Three” being in their thirties, they have shown no evidence of slowing down — the past 11 Grand Slams have all been won by either Nadal, Djokovic or Federer.