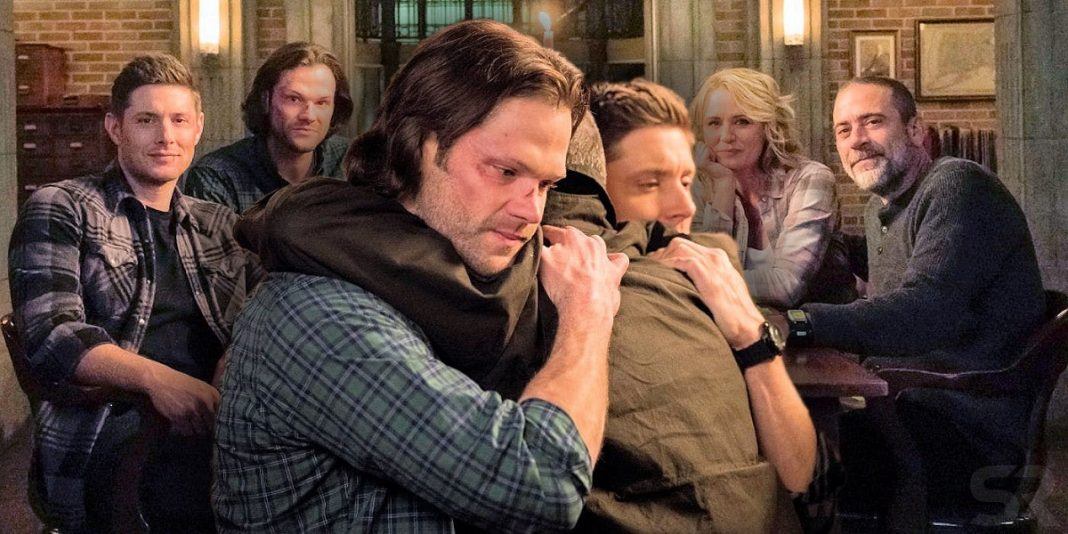 One thing you should know about me as a Supernatural fan is I’m a sucker for a strong cold open. Funny, scary, dramatic, doesn’t matter, a good cold open is a work of television art and extra points to a cold open delivered by only one actor. Scenes like this are a perfect storm of writing, directing, acting, and editing; everyone has to be on their game.

“Prophet and Loss” delivered in spades.

Dean Winchester at the bottom of the ocean freaking out and screaming for his Sammy (Jared Padalecki) is the stuff that reaches into your chest and claws into your soul. It’s one full minute of Dean struggling, claustrophobic and terrified, screaming one word and only one word (okay, “Sam” and “Sammy” are two if you’re gonna be pedantic about it) over and over is enough to make your heart race.

It’s all a dream though, and while that’s usually a reveal that leads to a seasoned TV viewer rolling their eyes, this dodges that trope bullet by giving us concerned Sam, who is clearly not sleeping well either. It also shows us that Dean’s dream was so intense that he was clawing his fingers bloody against the motel wall. Beautifully lit and heart-achingly shot, the brothers talk out Dean’s plan; Dean dreading it and Sam hating it.

These two boys know how to hurt you.

Now the plot of this episode was solid, too. Go figure. Donatello (who, to be fair, I’d completely forgotten about) is in a vegetative state, and apparently it’s screwing with the prophet lineage. This leads to a serial killer of biblical proportions getting mixed signals from Donatello’s mind. As a horror and true crime buff, this hit all my buttons. We’ve discussed how people criticize Supernatural for being disturbing…

It’s supposed to be. What show have you been watching??

I, for one, am always proud when this show pushes prime time horror boundaries and this episode delivered; bloody drowning, slice ’n’ dicing, attempted immolation. That’s the stuff, man.

Speaking of serial killers, we also catch up a bit with Nick in this episode. I’ve mentioned before that my unpopular opinion is that the Nick storyline is one of the better things this show has done in recent years. I’ve often talked about how one of the things that Sam and Dean rarely mention is how they blow into town and bust up people’s perception of the world. And, yeah, they’re saving people and hunting things, but then they just… leave.

I’ve often wondered, in that navel-gazing meta way, how these people cope with what they’ve been through. Sam and Dean have each other; these randos don’t have someone like that, someone who gets it. What happens to them.

Nick is what can happen. Nick spent years on and off riding around shotgun to Lucifer. He’s been through some shit, ? Nick is what happens when a Dean doesn’t have a Sam and a Sam doesn’t have a Dean. There’s no one to ground you, no one who understands that when you’re muttering about Satan telling you what to do you’re being not only serious but bizarrely honest.

As a true crime junkie, I like that juxtaposition. In real life, you have killers like Richard Ramirez who believed that Satan gave him orders and insight and even power. Nick is the Richard Ramirez of the show, trauma to the head and all. It’s a solid way to explore that without it hitting you on the head like a cartoon anvil. That’s what’s so refreshing of this show.

And, love him or hate him, Mark Pellegrino is an astounding actor. He really does elevate any scene he’s in, so in his post-escape confrontation with the ghost of his wife you can easily feel the turmoil in him as he lies to her, telling her she can rest, that he avenged her, all the while knowing that despite that she isn’t where the closure he needs lies. It was a brilliant twist on a standard infidelity love triangle storyline to have his wife call him out for wanting Lucifer more than he wants her.

Anyway, we also find out that Sam told Castiel about Dean’s plan. We also find out that Castiel seems to think he can get through to Dean. Now to be fair, he wasn’t there last week when Dean told Sam that SAM was the only one with the power to sway Dean, but also, like, that’s really quaint Castiel. Adorable almost. But no. And even Sam has to tell you that your attempt would be useless because Sam himself has already failed.

By the way, Dean is less than happy with Sam when he finds out Castiel knows. Dean didn’t want to deal with anyone futilely getting in his face. Except Sam. Because Dean spent all of last episode and part of this one saying, “I’m not one for goodbyes,” but in reality, he spent this episode towing his water coffin and giving Sam deathbed confessionals. Literally the most drawn out of goodbyes. So really, it wasn’t that Dean isn’t one for goodbyes, it’s that with Sam there’s so much there that the goodbye would never reach its end.

We learn in this episode that Sam still feels that Dean was the one who raised him and that Dean was, is, and will always be Sam’s constant. We also learn that Dean wasn’t always daddy’s perfect soldier and that is devotion to Sam growing up would occasionally drive a wedge between him and John. And how do you punish a young Dean Winchester? The same way you punish an adult Dean Winchester: you take him away from his brother/child/best friend, his Sammy.

While we’re on the subject of best brother-friends; in a classic parallel moment we meet Eddie in this episode, he’s the twin brother of one of the victims, Alan, the one with is throat slit. Eddie and Alan were twins and according to Eddie his big brother (by four minutes, I see what you did there writers) Alan and he were best friends and the pain he feels losing him is like none other. Like losing a piece of himself.

Sam and Dean Soulmatechester can relate.

Sam and Dean investigate then figure out the Enochian/prophet connection and Castiel, who knows the name of the semi-tapped prophet, Tony Alvarez, figures out that this is due to Donatello’s suspended state. Which is Castiel’s fault.

Anyway, there are a few scenes in the hospital and honestly, none of it made a ton of sense. After repeated viewings I’m still not completely sure how Donatello was “healed”. Was it Castiel? If so, then what was the point of scrambling his noodle to begin with. Was it plain old will to live? Was that the theme? Whatever, it fell flat, but I get it. They needed an excuse to shove Castiel into Mr. and Mr. Winchester’s story. And yes, Castiel referring to them in that manner is literally all I successfully took away from the hospital scenes.

As soon as Donatello was stable Dean bailed. And rightly so; Donatello’s state was Castiel’s doing and as such, explaining it was Castiel’s job. Besides, Dean has a little brother to continue saying bye to…

Only Sam isn’t having it.

He’s drunk and angry and scared and just so damn sad. He goes from glib to belligerent as Dean casually speaks of last hurrahs. Belligerent is an understatement, Sam. Goes. Off. He pushes Dean, yells at him, pleads with him, punches him, and then pleads with him again, screaming that he believes in them and demanding to know why Dean doesn’t. He goes in for another punch and Dean just grabs him, hugs him and tells him that he does believe, that he’ll shelve his plan, and tells Sam that they are going home. All while Sam clings to him, disheveled and snotty and oh so desperate.

Castiel emerges from the hospital to find them. Dean continues on, telling them that while he does believe in them, that if the time comes they need to let him go. Jensen Ackles plays this so perfectly, he almost never takes his eyes off Sam during this scene, cutting to Castiel only for quick, infrequent moments, reiterating that what needs to be done will have to be done. It reminded me of season 10 when Dean sat Castiel down and told him that if the Mark of Cain took over too strongly then Castiel would have to put him down because Sam wouldn’t. Couldn’t.

That’s seemingly the one thing Dean truly trusts Castiel to do right. To protect Sam from having to take Dean off the playing field. Mostly because Sam won’t be able to go through with it.

Dean’s laser focus on Sam doesn’t waver has he pats him on the cheek and softly tells him not to hit him again. He isn’t angry with Sam; it’s a big brother telling a little brother, “I get it, I do”.

Scenes like this are what make these brothers an addictive TV drug. It’s reminiscent of the emotional scenes like Dean’s speech in “All Hell Breaks Loose” or Sam’s breaking point in “Fresh Blood” evoke.  It’s what’s kept this show on the air for 14 going on 15 seasons. This season had been woefully missing what makes this show tick, but it turned that around these past two episodes.

Now lets see what the 300th milestone Supernatural episode has in store for us tonight.