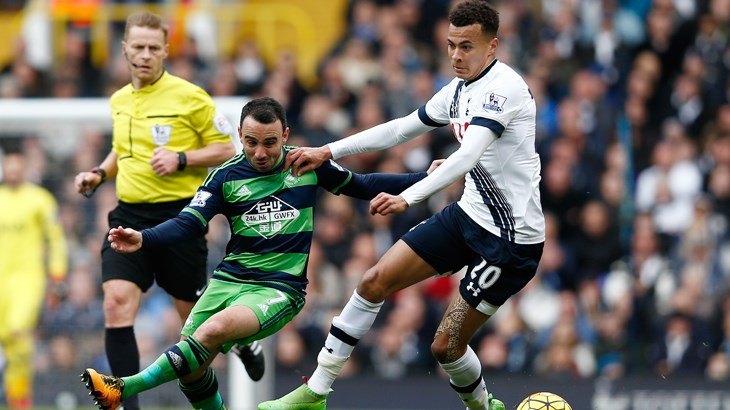 The top four sides in the Premier League drop points in the midweek league matches. Arsenal, Tottenham and Manchester City lost their fixtures while Leicester were held by West Brom at King Power Stadium.

Leicester City have extended the lead at the top of the table to three points thanks to the point they earned on Tuesday. The Foxes were involved in a 2 – 2 stalemate at home against Tony Pulis’s West Brom. They can even increase their dominance at the top of the table with a win this weekend as the second-placed Tottenham invite third-placed Arsenal for a crunch tie at White Hart Lane. If Mauricio Pochettino’s Spurs drop points on Saturday, Leicester will have an opportunity to establish a comfortable cushion with only ten matches to go.

Tottenham lost 0 – 1 to Slaven Bilic’s West Ham. Antonio scored the only goal of the game in the seventh minute. The Hammers are now pushing for a place in the top four. They are only a point behind the fourth-placed Manchester City.

Arsenal’s meltdown in the league continues as they lost their third successive match in all competitions. The Gunners lost 2 – 1 at the Emirates and Arsene Wenger was jeered by the fans after the referee’s final whistle.

In the post-match conference, the Frenchman admitted that his men are short of confidence at the moment but they will look to bounce back in the big North London derby at the weekend.

He said: “It looks a bit like that, yes. It’s a very disappointing result and the players are very down.

“We have to focus on our job and come back reminding ourselves that we have some quality as well. Analyse it well and bounce back. We have a big game in three days.”

“At the moment I am more worrying about our results than the title. We just lost three games and that is always a very difficult moment for the team.

“We will not talk about titles tonight. I’m not in the mood. It’s a big disappointment.”

Manchester City lost 3 – 0 to Liverpool, who they defeated on Sunday to clinch the Capital One Cup. Adam Lallana, James Milner and Roberto Firmino netted one each, keeping the Reds in proximity to the spots necessary for booking their place European competitions. Pellegrini’s City are now equal on points with their neighbours Manchester United but they are ahead of the Red Devils on goal difference.

Manchester United won 1 – 0 against Watford at Old Trafford. The 20-time English champions left it late to clinch the crucial three points on Wednesday. Juan Mata, who given the captain’s armband for the night, scored a spectacular free-kick in the 83rd minute to keep their winning momentum.

Sunderland climbed out of the relegation zone after the 2 – 2 draw against Crystal Palace on Tuesday. They are equal on points with Norwich and Newcastle, both of which lost their fixtures in this game week. Aston Villa lost 1 – 3 to Everton and they stay at the foot of the table, eight points behind their closest competitors.