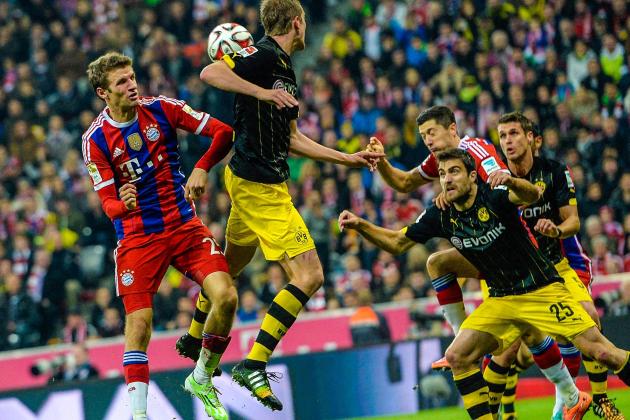 The top two teams in the German league will go head-to-head on Saturday at Signal Iduna Park. Bayern Munich are five points ahead of Thomas Tuchel’s Dortmund and that gap can be diminished to two points this weekend.

Dortmund play host to the German champions in the hope of closing down the gap at the top of the table. Bundesliga, this season, is a two-horse race as third-placed Hertha BSC are 15 points behind Dortmund.

Pep Guardiola’s Bayern Munich will hope to bounce back from the 2 – 1 defeat at the hands of Mainz on Wednesday. Samperio and Cordoba gave all three points to the visitors at Allianz Arena and a solitary strike by Arjen Robben couldn’t reap any benefits.

The Black and Yellows won 2 – 0 at Darmstadt on Wednesday, and they will head into the fixture with a positive state of mind. Adrian Ramos and Erik Durm netted a goal each for the 2013 Champions League finalists.

Borussia Dortmund manager Thomas Tuchel was glad with his team’s victory at Darmstadt. Tuchel is convinced that the win gives them a massive boost for the game at the weekend. However, he also acknowledged that a five point lead is not a joke, and they will have to work harder in their upcoming matches.

Tuchel said: “The victory gives us an enormous boost. That’s why I’m happy about our performance.

“The advantage has melted – the situation has changed. Of course, we are trying to shorten [Bayern’s] lead.

“Five points is a big lead, but the ball is with us!”

“There is nothing more to be gotten out of this line-up,” said Tuchel. “I say that with absolute appreciation for my team.

“If you come to Darmstadt as Dortmund, then the best that you can deliver is a very serious performance. Unspectacular, but effective. That is what we have done.”

When these two sides met for the first time this season, Bayern Munich thrashed Dortmund 5 – 1 at the Allianz Arena. Thomas Muller and Robert Lewandowski scored two goals each while Gotze chipped in the fifth of the night in October 2015.

It is safe to say that the top scorer of this season’s Bundesliga will be from either of these two sides. With ten games remaining, the Polish striker Robert Lewandowski leads the chart with 23 goals, closely followed by Pierre-Emerick Aubameyang, who has bagged 22 goals in 24 games. The third highest goal scorer in the league also hails from the top two sides in Germany. Thomas Muller has netted 17 goals, and he is easily among the best players of the season in the German league.