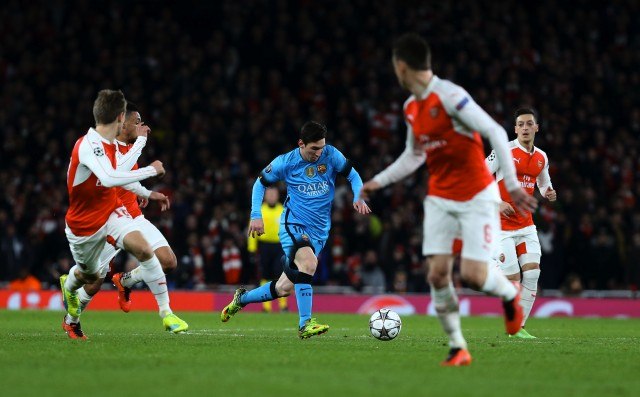 Arsenal have fallen five points behind the league leaders Leicester after the 3 – 2 loss to Manchester United on Sunday. The North Londoners faced a young United side at Old Trafford, but Marcus Rashford’s heroics gave hosts a much-deserved victory.

Arsenal never looked to be in control of the game. The Gunners are now three points behind their arch-rivals Tottenham, who they meet at White Hart Lane at the weekend.

In the absence of Rooney and Martial, Man United’s goal scoring department is being handled United’s young prodigy Marcus Rashford. The 18-year-old striker bagged two goals and an assist in his debut match in the Premier League.

The talented youngster also scored twice in the 5 – 1 win over Midtjylland last week. Van Gaal’s men have now closed the gap between them and fourth-placed Man City to three points, but Pellegrini’s men have a game-in-hand.

The Dutch manager also got carried away and dived in front of the fourth official. His antics amused everyone present at Old Trafford, but Van Gaal apologized for getting out of line.

He said: “I was a little bit emotional, too much I think. It is not good for the authority of the referee and the linesman and the fourth referee. I have apologised, and they have accepted it.”

Tottenham came back from behind to win 2 – 1 against Swansea City. Swansea’s Paloschi scored his first Premier League goal. Chadli cancelled out the visitors’ lead in the 70th minute, and seven minutes later Danny Rose grabbed the winner.

Leicester City picked up another three points against Norwich at home. Their 16th win of the season was triggered in the 89th minute of the match as Ulloa scored the winner from a fantastic cross from Albrighton. The match at King Power Stadium ended 1 – 0 and the Foxes now entertain West Brom on Tuesday.

Chelsea won 2 – 1 at Southampton courtesy of late goals from Fabregas and Ivanovic. They are currently 11th in the league table but with a winning run, they can end up in the top half of the table by the end of this week.

West Ham won 1 – 0 against Sunderland while Watford were held to a goalless draw by Bournemouth. West Brom beat Crystal Palace 3 – 2 while the foot of the table dwellers Aston Villa lost 2 – 1 to Stoke City.

Newcastle, Sunderland and Aston Villa remain in the danger zone with Norwich and Swansea not very far from getting pulled into the relegation struggle.