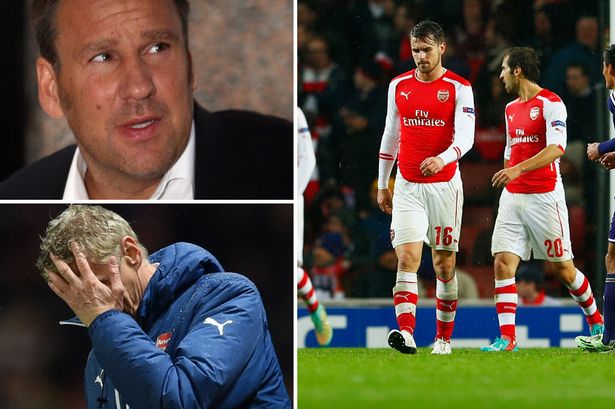 Former Arsenal player Paul Merson believes that there is no reason for Arsenal to finish below Leicester and Tottenham this season.

The North Londoners have not lifted the Premier League trophy since 2004. After the setback at Old Trafford on Sunday, the Gunners have extended the gap between them and Claudio Ranieri’s Leicester to five points. With 11 games still to go, Arsenal still have an ample time to gain an upper hand over the current top two.

“If Man City don’t win the league and Tottenham or Leicester do then Arsene Wenger has to go,” he told Sky Sports.

“If you’re sitting there telling those fans – loyal Arsenal fans – that they don’t need any new players at the start of the season, and then you don’t win the league in front of Leicester or Tottenham then I don’t see how you can justify it.

According to Merson, Arsenal’s French boss has excuses for the cash-rich Manchester City but losing to Spurs or Foxes cannot be tolerated.

“If Man City win the league he can turn around and say ‘they’ve got all the money in the world and can go and buy whoever they want, so would whoever I bought have made much difference?’.

“But if Leicester or Tottenham win the league after he said they didn’t need any players then I don’t see how he can keep his job.

The Arsenal legend questioned the ability of Wenger and claimed there are plenty of managers who can finish top four with the current squad.

“People may say there’s nobody better than him, but there’re a thousand managers who could come in and get Arsenal in the top four.

“A thousand managers would come to Arsenal and say ‘don’t give me a penny, but if I get Arsenal in the top four then pay me 10 million quid’.

“Every football manager in the world would take that deal. Arsenal are always going to get in the top four.

“If Leicester or Tottenham win the title then I just don’t see how he can keep his job.”

Thierry Henry was also unhappy with his former side’s defeat against a young Manchester United side. Arsenal lost 3 – 2 to United at Old Trafford on Sunday.

“That wasn’t the performance of a team who wants to be champions,” said Henry, who has been working with Arsenal’s youth team as he develops his coaching skills.

“As an Arsenal fan, I’m thinking, ‘Can you show me you can be champions?’ — and today they didn’t reassure me on anything. They were second-best in everything. It was a really poor performance.

“They’re still in the title race, but as an Arsenal fan, how are you going to feel confident going to Tottenham, to Everton, to West Ham?”

Arsenal are also trailing in their Champions League round of 16 tie. They lost 2 – 0 to Luis Enrique’s Barcelona in the first leg, and they will travel to Camp Nou for the second in two weeks’ time.

This could prove to be Arsene Wenger’s last season in the Premier League if he fails to deliver some major trophy other than the FA Cup.