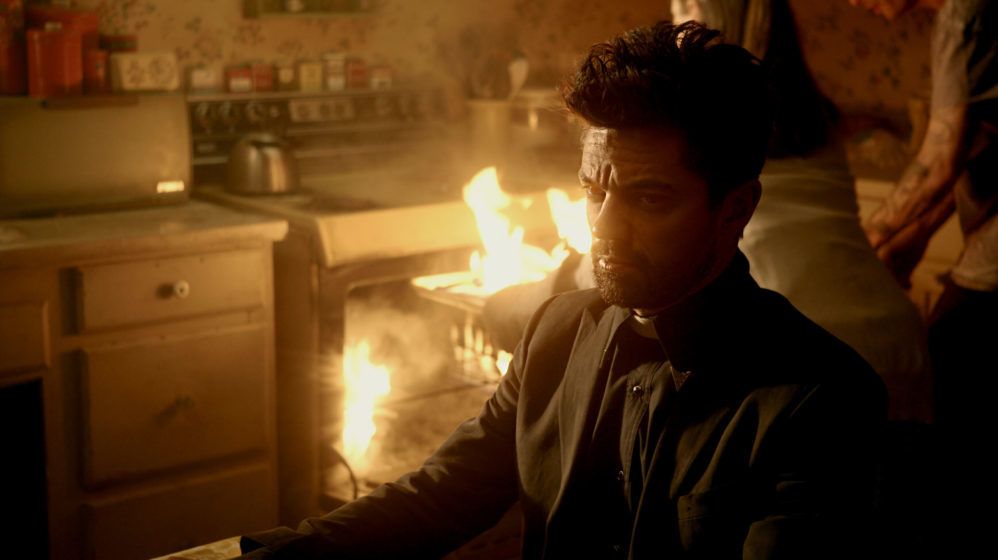 “With God all things are possible.” That’s what the leaflet said that Eugene was holding right before he was sent to hell. The kid better hope one of those possibilities is getting a ticket out of eternal damnation.

Jesse doesn’t seem too concerned as the episode opens and later even says Arseface got what he deserved! Preacherman is bringing merciless fire and brimstone this week.

It’s a good thing Cassidy witnessed what happened to the boy or else Jesse may have ignored it forever. The guy was carrying on church business as usual with a full house on Sunday and even a crowd outdoors.

While Jesse was preaching the gospel, we got another scene with Quincannon enjoying the latest cattle killing hits through his office speakers. This guy is next level weird, but you have to admire his giant replica fort.

In the first of many flashbacks, it’s pretty obvious Tulip had a rough childhood. She and Jesse were in trouble for a fight that left ole Donnie with a damaged nipple.

Jesse admired his daddy for doing the right thing and even told God so in his prayers after they took Tulip in. That would change soon enough.

Cassidy continues to steal the show each week with his vampire act. He confronts Jesse about sending Eugene to the hole, but Preacher just brushes it off like it’s not a big deal. To be fair, Jesse has a lot on his mind with a growing flock and can’t be worried about one lost sheep.

Oh, and Cassidy has proclaimed he and Jesse best friends. Banging the guy’s ex-girlfriend doesn’t automatically make them best bros. Maybe that’s the case in Ireland, but that stuff doesn’t fly in Texas buddy.

Cassidy takes it upon himself to tell Tulip about Jesse’s power. And she’s totally shocked? Nope. She just ignores the statement almost completely and keeps moving. She does take the time to tell Cassidy that his new best friend will never accept him as a filthy vampire.

As the flashbacks roll on, Jesse has a change of heart about dear old dad when he calls child protection services to take Tulip away. Jesse turns to God for help as he asks the man upstairs to smite his father and send him to hell.

Jesse is pretty specific in his prayer requests even as a youngster.

Besides the sheriff sniffing around for Eugene, Preacher has more trouble. Turns out that the local tycoon loon, Odin Quincannon expects Jesse to hand over his land and the church. There’s some disagreement over who won their little bet over whether the beef baron really converted over to Christianity.

For some reason, Tulip thinks it’s a good idea to cook dinner for everyone. She does not strike me as the best homemaker in the world. And it goes pretty badly as she catches the main dish on fire just as the sheriff comes snooping around for his BBQ’d son.

Emily even lies to the lawman about seeing Eugene leave after meeting with Jesse before the Sunday service. 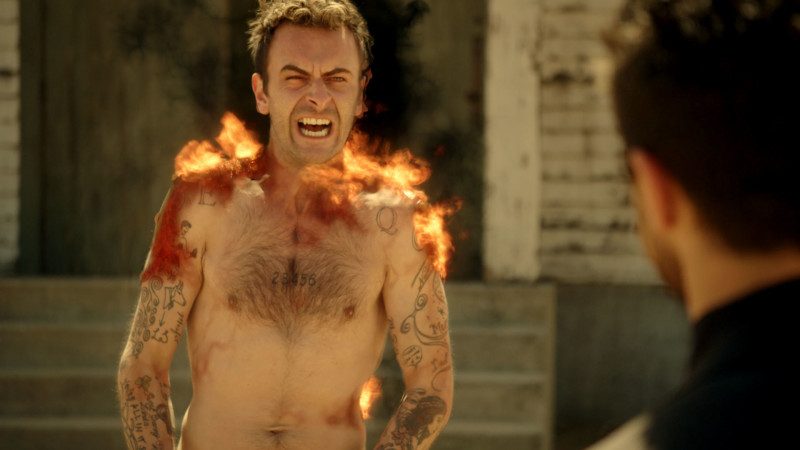 Cassidy finally gets the attention of the preacher with a fire extinguisher to the nose. That lead Jesse to tell Cassidy that Eugene deserved a trip to hell for blasting the Loach girl in the head with a shotgun for turning him down for the prom.

That was pretty shocking to Cassidy, and it makes him doubt his new besty. So he rips his shirt off in order to be set ablaze by the sunlight to see if Jesse will indeed help him.

We’ll have to wait for next week to see if Cassidy survived the test. No way this guy is gone from the show of course. One, he’s too cool of a character to be dismissed. Two, he’s a freaking vampire, and I’m sure his reckless lifestyle has left him on fire on more than a few occasions.

After the little fire show, Jesse is pissed at Tulip because she was OK with the vampire thing. And he even verbally abuses his biggest fan Emily, who saw an opening to profess her respect (actually love) for him.

“When you came back here, I believed in you,” she told him.

“That was stupid,” was Jesse’s reply. This guy can be nasty when need be.

We finally see what happened to Jesse’s dad. We knew he had been shot to death, but we didn’t see the details until last night.

The last thing the dad heard was Jesse telling him, “I did this. I prayed for this.”

Dark words from your own kid right before getting popped in the head with a large caliber pistol.

The final scene showed Quincannon Meat & Power on the march to the House of the Lord. It looks like the scene from the wacko’s fort replica.

No way Jesse’s church is getting knocked down by that bulldozer right?

And if it does, Odin Quincannon will just be forced to build it back, board by board, when Jesse says so.

It would be less trouble if Odin would just turn around and head in the opposite direction…never looking back, lest he be turned to salt, or worse. Genesis 19:26

We’ll be taking up a collection next Sunday for Tulip to get some running shoes in case she needs to run any pants-thieving punks in future episodes.