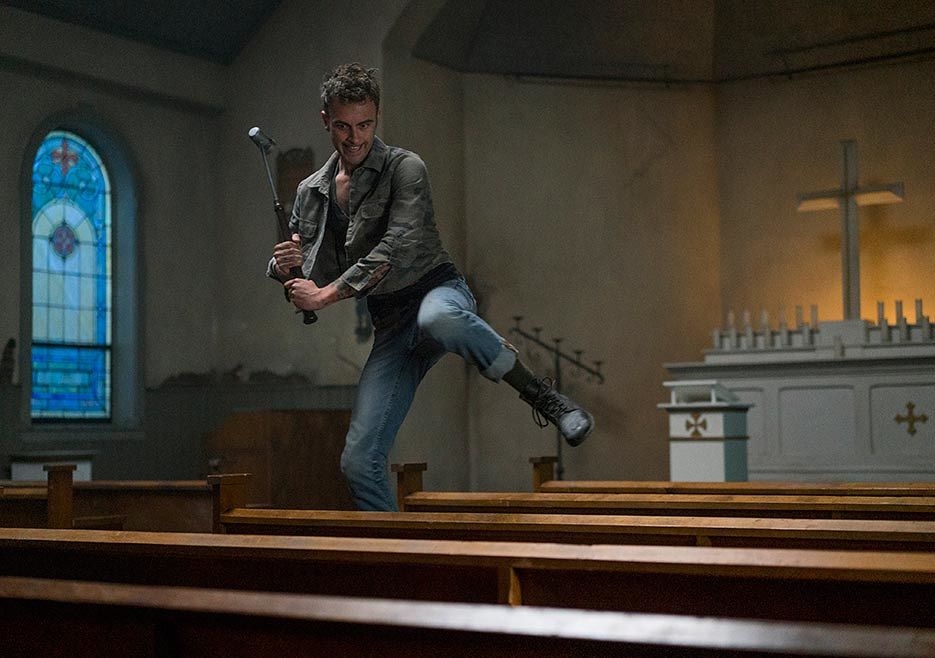 What are the possibilities of this wild-ass “Preacher” show?

It’s so “out there” it could come off the rails at any point. If it were on NBC or any other old school network, I’d bet on just that happening, in about five more episodes.

But with AMC, the possibilities are much brighter. The network knows how successful a comic book series can be if done right. So hopefully Preacher stays the course, even while building a universe where we have no idea what could happen next.

So, what did our boy Jesse talk people into this week with his new found super power? He spoke the powerful Word for both good and for some necessary bad.

But first, let’s break down the church sign message this week.

I like it. On point and easy to remember. You local church leaders feel free to use these messages since some of your old school messages can get redundant. Keep it fresh for the flock.

OK, we’re getting more info on this mysterious map each week. At this point, it’s still not as important to Tulip as getting revenge on Carlos. This guy apparently backstabbed her and Jesse at some point. She trades the map for Carlos’ last known address.

Dani is the lady who makes the trade, and she wants her weirdo husband killed, but Tulip isn’t into it at the moment.

Meanwhile, we get a scene with Sheriff Root, who’s just as freaky as the two suited cowboys, Deblanc and Fiore. They tell him they are government officials on the tail of an escaped lunatic, but they later tell Cassidy they are from heaven. I’m guessing the later is the truth.

The sheriff then tells them a story about a couple of kids being murdered years back by a festival worker who had never even been in trouble at all. A sign that evil spirits had visited this region before maybe.

Now, if you’ll turn in your Bibles to first Corinthians, we’ll check out the results of Jesse’s good works from last week.

– Coma girl indeed opened her eyes. She’s not back to a real life, but her mama was sure pleased seeing her baby’s eyes once again.

– The bus driving, child stalker has truly forgotten the little girl he was obsessed with before getting fire baptized by Jesse. And the creepy bus driver gets crushed verbally by another little girl cracking on him. Give this kid a recurring role!

Was Tulip really a chopper gunner in the military?

Even if it was a lie, it got her out of a 115 mph speeding ticket. This lady didn’t learn her fighting skills at an auto plant, so I’m guessing she really is ex-military. Or maybe she learned to build a bazooka out of tin cans on Youtube.

Want to hear Cassidy’s take on Jesse’s new powers? He says Jesse may be a Jedi. Preacher certainly has the mind trick down pat as he has Cassidy hopping around like a trained monkey as he tests his powers.

There’s hints of what’s happening to Jesse when he says there’s “a blender in my gut.” There’s talk about him feeling all of God’s creation inside him.

Whatever “it” is, Donnie got a taste of it when he tried to take revenge on Jesse with a big-ass pistol in a gas station bathroom. Jesse didn’t have to make the bully scream like a bunny this time. He just went Obi-Wan on the guy, telling him to put the gun in his own mouth, and pull the hammer back.

The gas station attendant just thought he had a mess with Joey Chestnut stopping by last month for a bathroom run. Donnie’s big head exploding would have required three gallons of bleach and a slew of mops.

But the preacher man lets him walk away.

The little bathroom incident caused Jesse to back out of helping Tulip track down and kill Carlos. For now anyways.

Cassidy’s not real familiar with the Ten Commandments, so he didn’t have any such reservations about whacking Fiore and Deblanc once again…and then almost for a third time.

The two angels(?) were going back to get the weapon / spirit from Jesse at the church when our Irish vampire mangled them with the church van.

The two guys then explained that they were not vampire hunters. They were there to reclaim something that escaped and entered Jesse. Cassidy convinces them he can be a middle man to broker the deal.

Is he playing them, or is he really wanting to help? Cassidy may be tired of cleaning up their carcasses and just trying to find a better way to get rid of this impossible to kill duo.

To wrap up the recap, please bow your heads for a moment of silence as we honor geek-guy from episode one, who cut his own heart out. The semi-honorable Reverend Jesse Custer will say a few words, even though he inadvertently caused the nerd’s death.

Episode three was another solid effort for Preacher. Even though we don’t know much about the show’s evil corporation or its head honcho, it’s an intriguing sidebar to the main story.

There’s lots of moving parts that will slowly come together as Jesse figures out the best way to use his powers in order to save a town that Tulip says is long past saving.

Either way, you have to be curious as to where all this is headed.