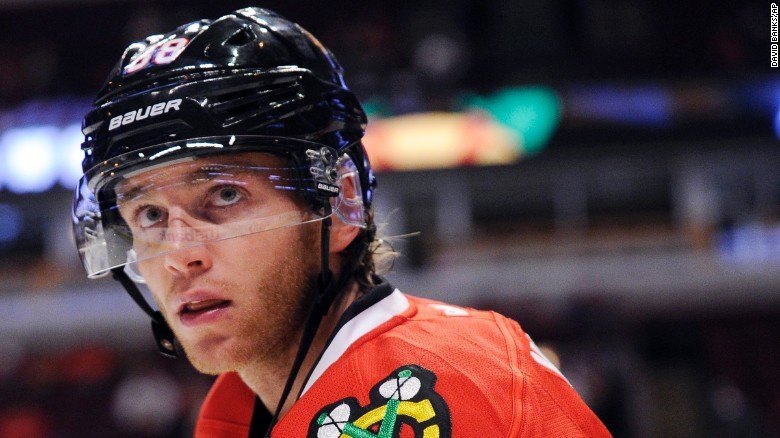 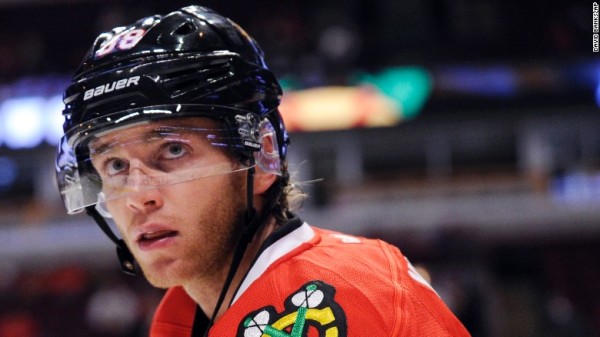 The start of the 2015/16 NHL regular season is now less than two weeks away. While that has naturally caused plenty of buzz about who is going to do what when play gets underway unfortunately, this year, additional to all the pre-season hype there is plenty of discourse revolving around Patrick Kane, a superstar forward for the Chicago Blackhawks.

Kane’s name has been central to an investigation by the police force in Hamburg, a large town/small city in the state of New York. Back in early August, a young adult woman alleged that the hockey player took her to his home and raped her after they met in a nightclub. Kane, more recently, stated that he was “confident that once all the facts (were) brought to light” that he would be “absolved of having done nothing wrong.”

Looks like Kane blossomed as an athlete a little too early in life and hence didn’t have to worry about grammar school that much. He surely meant to say that he is “confident” that he will be “absolved” of wrongdoing.

For the third party on-looker, which basically means everyone besides Kane and the accuser, a common dilemma has once again arisen. For me, it’s the same dilemma I had at the start of the Kobe Bryant rape investigation in the first half of the previous decade. I think it’s a dilemma that many people had and will have in situations like these where all the facts aren’t known.

If Kane committed a crime, especially one as serious as sexual assault or rape, then a decent person would want him held accountable. There should not be any special consideration for his celebrity status. However if he ‘didn’t do nothing’ then I think many would wonder why he was accused and if his celebrity status actually has something to do with it.

The dilemma with Kane is that ‘we don’t know nothing’ about what is going on in his situation and his double negatives aren’t helping.

But usually third party on-lookers, like us, have to wait while all the facts start to unravel. That was the case with Bryant and it may be the case with Kane.

Firstly, there is no solid DNA evidence against the NHL star at this point and may never be. In an age where everyone loves forensics, that has to be a massive point in his favor. According to buffalonews.com (September 19th):

“DNA tests taken from a rape kit conducted on the woman showed no trace of Kane’s DNA…in the woman’s genital area or on her undergarments.”

However confusing the matter is a little issue involving a certain possible rape kit.

It has been reported that the attorney of the accuser claimed that an empty paper bag had been placed in the doorway of the accuser’s mother’s home, a bag that allegedly has something to do with the rape kit central to the investigation (the Associated Press reported this on Wednesday). This has lead to questioning of how the Hamburg Police have handled the evidence and, on that note, they claimed that their handling has been “unassailable” (ie. they ‘didn’t do nothing’ either).

So who put that seemingly red herring there and why? And why did the accuser’s lawyer bail?

Us third-partyers are all left to wonder what is going on and my guess is that ‘we won’t never’ get a satisfying answer. We only have our hunches which are dangerous – especially when people start tweeting them to all their followers as though hunches were axioms.

However the strangeness of the paper bag situation does throw an oddity into it all – one that I think helps Kane. In a legal system, like America’s, where the onus is on police and prosecutors to prove guilt and where defense only need to establish reasonable doubt you have to think anything weird probably helps Kane’s side a bit.

Of course the whole situation, whatever the facts, does promise to detract away from something called hockey. After all, the Chicago Blackhawks are the defending champions and they have the same head coach in place and the same key players as last season. Will this issue cause problems and resentment in Chicago? That is a possibility that throws some confusion into standard hockey pre-season analysis. Conversely the situation could die down as it appears to be in some ways.

On that note, until someone comes up with something of substance on the Patrick Kane matter all this Edmontonian has to say is “Go Oilers.”