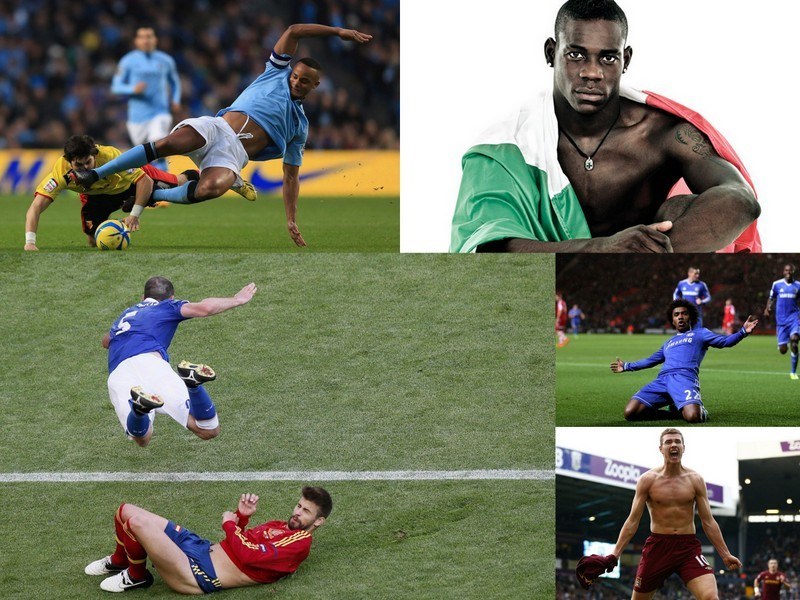 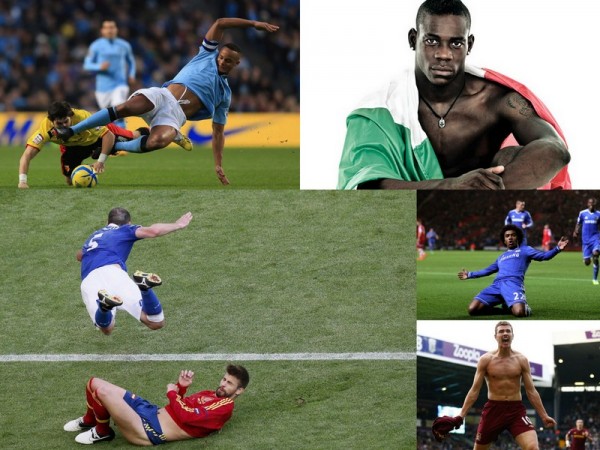 With the domestic seasons long underway, here’s a look at some of the most overrated and underrated players in European football. 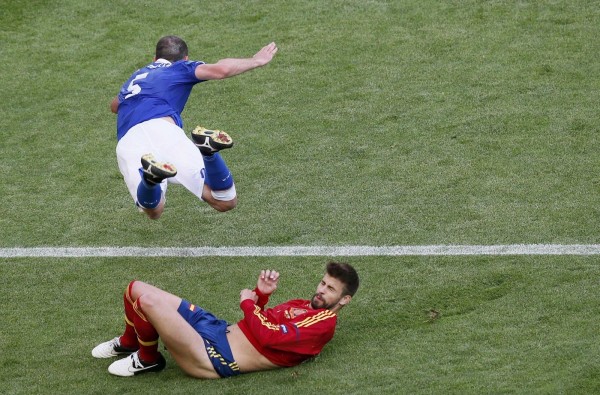 It’s true that the Catalan defender was one of, if not, the best defender in the world at one point during Barcelona’s successful period under Pep Guardiola. A backup defender at Manchester United, Pique signed for his hometown club and excelled immediately at the heart of the defense alongside club captain, Carles Puyol.

However, with Pep’s departure as well as Puyol’s constant injury problems, Pique suffered as a result and hasn’t been the same defender. Despite fans still rating him as one of the best that is simply not true anymore as Barcelona’s latest trophyless season and Spain’s World Cup campaign clearly showed.

Pique himself knows that he can do better as he mentioned in a recent interview:

“Right now I’m not even in the top three [defenders] in the world. I can’t be for the season I had with Barca and the World Cup with the national team. I know that to play at Barca I have to be among the top three in the world. I also know that I can regain form and I will do. But if I can’t live up to the highest standards, I’m the first to raise my hand and say I can’t.” 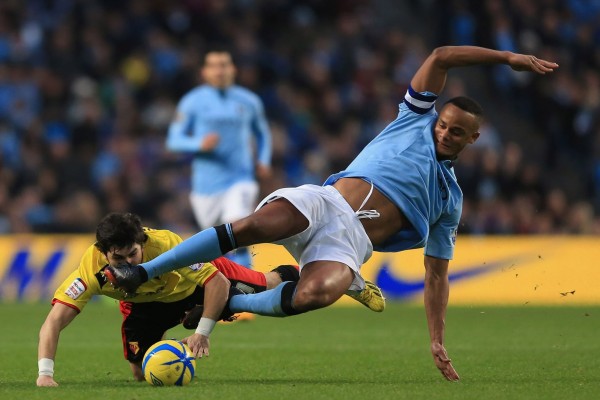 Like Pique, Kompany was the best defender in the Premier League and potentially in the world at one point, especially during Manchester City’s title winning season in 2011/2012. He was commanding, a great leader and scored crucial goals for the Citizens.

However, once that reputation was formed in the minds of fans and journalists alike, it wasn’t going to change for a while. Since that title winning season, the Belgian defender has been average to say the least, hardly replicating the performances that earned him such an esteemed reputation. And yet, he is still considered one of the best defenders in the world when in reality, he isn’t even the best defender in England.

While City won the league this past season, it wasn’t an easy ride whatsoever as there were many doubts lingering over City’s defense especially with Kompany’s new partner, Martin Demichelis. The Argentine – who is rather old and slow – was blamed for most of Kompany’s errors despite actually doing well in most cases.

As Michael Cox put in his Zonal Marking blog:

“Kompany remains a fine player, but he’s committed almost every kind of defensive error in the last year or so – vulnerable to pace, capable of scoring crazy own goals, mistiming tackles, getting spun high up the pitch, jumping into tackles two-footed, losing his man at set-pieces, getting caught in possession. English football seems to have a blind spot to his failings, too: one newspaper column declared him the player of the season on the morning of this game, another gave him 8/10 for this display where, again, he was responsible for all three goals. Imagine the reaction had Demichelis cost City three goals in three different ways…”

Kompany needs to emulate his old performances if he wants to be in the reckoning as one of the world’s best defenders. As of now, he’s overrated simply because he is being rated on his past reputation and performances rather than his current displays. 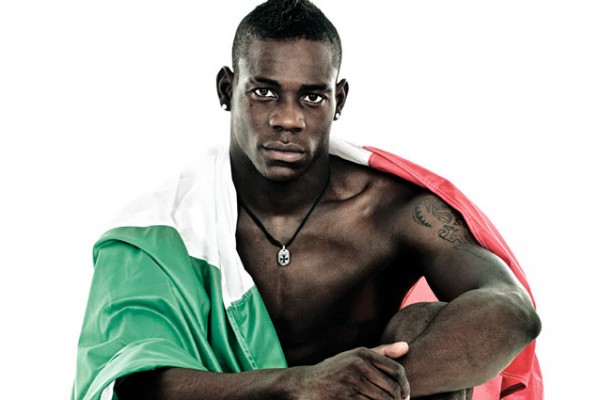 He might be an enigma who can score all sorts of goals, but Balotelli is far from the ideal striker. Known for his antics worldwide, Balotelli still hasn’t grown up completely and can be very inconsistent and moody on the pitch as was shown perfectly in the World Cup for Italy.

If Balotelli truly wants to be the best, he needs to follow the footsteps of his former teammate, Zlatan Ibrahimovic – another player who was eccentric and known for his antics but one who eventually matured, was consistent on the field and always delivered when it came to performances and trophies.

As of now, Balotelli isn’t doing either of that for club and country – after all, there’s a reason why despite probably being their best player, AC Milan wanted to offload him and get as much money as possible.

It seems like he’s been there forever but the fact is Balotelli is just 23-years-old – he still has time to deliver and perform to his potential. But right now, he just isn’t doing that and so, is pretty overrated in our eyes, considering how most fans speak of the Italian enigma. 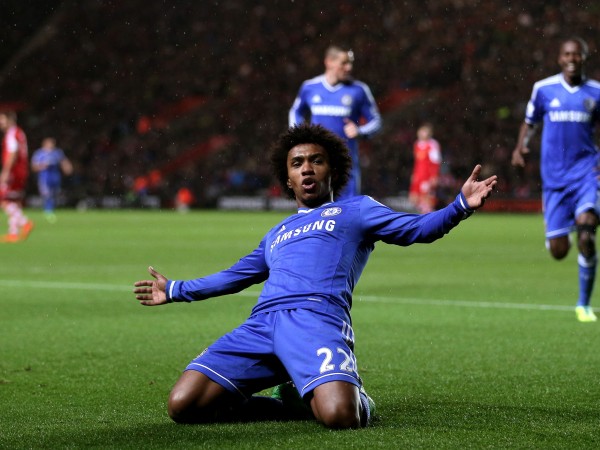 When Chelsea forked out £32 million for the services of Willian, right under Tottenham’s noses, most fans expected an explosive winger, capable of producing something out of nothing. While that hasn’t been the case – especially as Willian only scored 4 goals in his debut season – coming off the back of a slow start, Willian has proved to be an astute piece of business for the London side.

With technical qualities, immense work rate and tracking back, the Brazilian is one of the first names on the team sheet for Jose Mourinho. Despite a trophyless season, Chelsea reached the semi-finals of the Champions League and finished 3rd in the Premier League, losing all but one game against the top seven – and Willian was a key part of that success, especially with his defensive ability which is probably the strongest out of all the Chelsea attacking midfielders.

After a 3-0 win over Stoke City where he scored, Mourinho said that Willian’s next target should be scoring more goals:

“The goal was really good but I think a player with his quality, that gives so much to the team, not just in possession but in the defensive work and balance of the team, I want to see him score more goals. He has to do that in the second season, he has to bring his game into other levels.”

If Willian can do that, he will finally start being appreciated by the rest of the world. 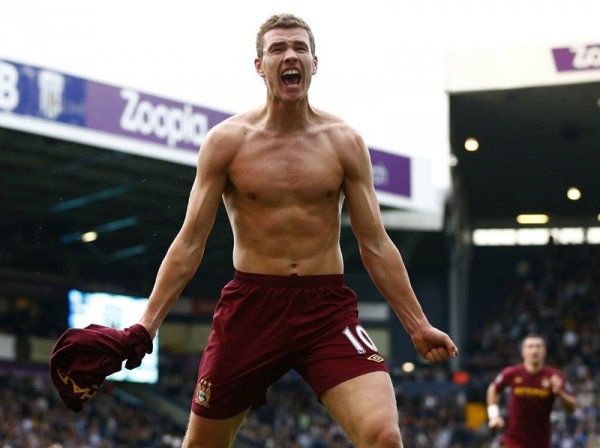 One of those players who is barely appreciated by his own fans, it’s amazing how Dzeko isn’t rated higher. One of the most lethal strikers in world football, Dzeko has played a key role in Manchester City’s rise as one of the top clubs in Europe.

The issue with the Bosnian is that he can be very inconsistent and lazy in the eyes of fans such that one game, he would score a hat-trick and in the next game, be completely anonymous. As one City fan put it:

“An infuriating striker whose troubles of last season still haunt him now. His touch very often lets him down, his attitude veers from uninterested to appalling and the system City play doesn’t really suit him.”

However, Dzeko proved many people wrong this season as with the injury to Sergio Aguero and the patchy form of Alvaro Negredo, the Bosnian’s 16 league goals in 31 games helped City win their second league title in three years. He even earned praise from Mourinho:

“He was the third striker at the beginning of the season and when the team needed him, in crucial moments, he made the difference. He has 16 goals. Sixteen for the third striker is something spectacular. He’s not just a goalscorer. He assists, he plays.”

Dzeko as a result is close to earning a new contract at Manchester and is slowly getting the respect and appreciation that a player of his quality deserves.