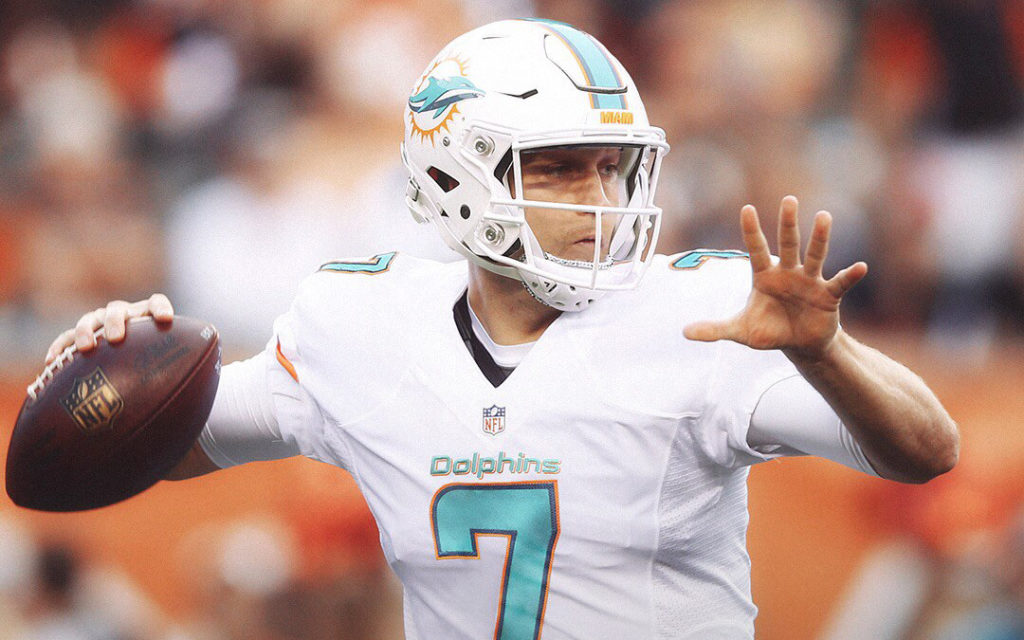 Jay Cutler may have left the sports broadcasting booth, but he’s still letting the quips fly about his return to the NFL with the Miami Dolphins. Plus that $10 million one-year (with incentives) contract didn’t hurt either.

When asked whether he was physically fit enough to return to the file, the 34-year old had this to say:

“The good thing is I play quarterback so I don’t really have to be that good of cardiovascular shape.”

The Miami Dolphins’ new quarterback practiced for the first time since December, marking the start of his comeback from a brief retirement. Rust removal included 11-on-11 drills and one-on-one conversations as he learns the names of teammates.

When the workout ended, the 34-year-old Cutler said he had no second thoughts about deciding to renew his working relationship with coach Adam Gase and return for another season.

“It felt right,” Cutler said. “Going into work and getting here and going through the motions of the practice, it felt good. I told Adam thanks for bringing me in. It’s fun to be back out here.”

Cutler, who parted with the Chicago Bears in March, agreed to delay his fledgling network TV career when he signed a $10 million, one-year contract with Miami. He’s expected to start in place of Ryan Tannehill, who is out with a knee injury likely to sideline him for the entire season.

Cutler took the practice field wearing jersey No. 6, his number since high school, after reserve quarterback Brandon Doughty agreed to give it up. When Cutler began to throw, he looked light on his feet and quick and accurate with his passes while showing good arm strength.

Same old Jay, said Gase, who was the offensive coordinator when both were with the Bears.

“He remembers basically everything with the offense,” Gase said. “He said he felt good, and he’s not going to sugarcoat anything with me. He felt just right back in it.”

Said Cutler: “It’s kind of a crash course, if you already took the course before.”

He underwent season-ending right shoulder surgery last December, but said his arm felt good and will need only a couple of days to be 100 percent. His timing will take a little bit to come back, he said, and the 88-degree morning temperature was hotter than he’s used to.

Cutler’s best moment came in individual drills, when he threw a 45-yard tight spiral that hit Jakeem Grant in stride at the goal line. Grant, a second-year reserve, described the moment as a dream come true.

“Everybody in the locker room grew up watching Jay,” Grant said. “It’s an honor for him to be on the team.”

Cutler might not know Grant’s name yet, but he seemed intent on getting to know everyone quickly. He spent much of practice engaged in steady conversation with backup quarterback Matt Moore, quarterbacks coach Bo Hardegree and even Tannehill.

“It’s a tough situation for Ryan,” Cutler said. “He has been great and supportive. He just wants to help this team win games.”

Also supportive was Pro Bowl defensive tackle Ndamukong Suh, Cutler’s nemesis when they were rivals in the NFC North.

“I’ve played against him many, many time,” Suh said. “I actually got my first sack against him. A good dude. I don’t like any quarterbacks, but he was one guy I definitely had respect for, because he took hits and never cried, never complained, just got up and played the next play.”

There was no tackling in practice, and Cutler won’t play in Thursday’s exhibition opener, so he doesn’t have to worry about sacks for a while. Tuesday was just a start; the hits will come later.