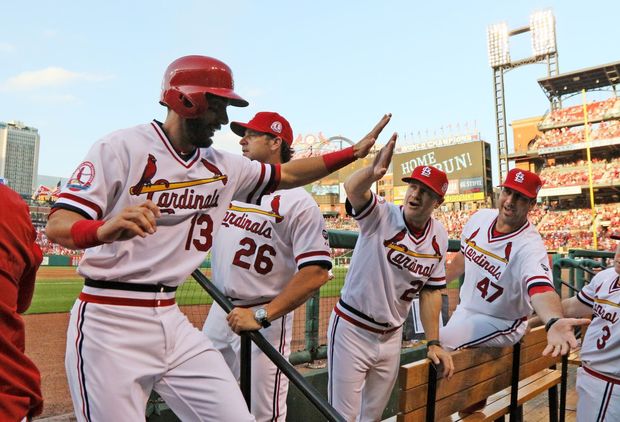 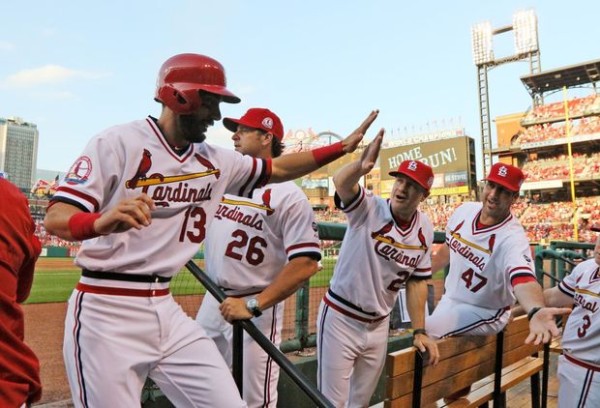 The St. Louis Cardinals continue to be the top team in the National League before the All-Star break and now after. The Cardinals are 7-3 over there last ten games helping them build a 5.5 game lead over the Pittsburgh Pirates in the National League Central Division. The team’s ability to produce with runners in scoring position as well as the team’s ability to pitch.

The more we look at the Cardinals roster the more impressed we are with how they have played not only this past week but the entire season. The Cardinals roster is not built around super stars like Albert Pujols, Miguel Cabrera, Mike Trout or even Bryce Harper. The team does spend money but they aren’t in the same league as the Los Angeles Dodgers, Angels or the New York Yankees.

That being said the team gets a ton of production from a variety of differnet players. This year the team has had a ton of success from Jhonny Peralta, Kolten Wong and Matt Carpenter in the lineup. On the mound, the Cardinals have been carried by John Lackey, Carlos Martinez, Michael Wacha and Lance Lynn. These four have combined to go 39-18 in 78 starts pitching to a 2.80 earned run average.

Down the stretch the question we have is which other team in the National League will challenge the Cardinals for the best record?

Now we have a chance to take a look at all three of the National League Divisions after another important week of baseball is in the books.

Much of this slight separation in the division has been due to the Nationals recent struggles this past week. The Nationals opened the week taking two of three from the New York Mets to push their lead in the division before losing three of four against the Pittsburgh Pirates over the weekend. In that series the teams pitching struggled allowing 14 runs over the first two games of the series. The teams struggles continued this week as they fell to the Miami Marlins 4-1 on Tuesday.

While the Nationals have struggled to put together a long winning streak they have allowed the Mets to Mets to move within one game. After a rough week for the Mets that included losing two of three to the Nationals before splitting their four game series with the Dodgers including winning back to back games over the weekend before picking up game 1 of the three game series with San Diego Padres on Tuesday.

Outside of the top two teams the hottest team in the division has been the last place Philadelphia Phillies. Since the All-star break, the Phillies are 9-1 including going 6-1 this past week with series win over the Tampa Bay Rays, a three game sweep of the Chicago Cubs before an opening game win on Tuesday against the Toronto Blue Jays. The Phillies pitching has bene solid in this stretch allowing less than three runs in seven games.

The other two teams the Atlanta Braves sit in third place while the Miami Marlins sit in fourth place.

While the Cardinals have been the hottest team in the division after going 7-3 last week the rest of the division failed to put together a better record than .500 last week. One of those teams was the Pirates who have been hanging around in second place after a strong finish to the first half. Last week the Pirates picked up a big 10-7 win on Monday to open the week against the Kansas City Royals but the team couldn’t build any ground losing the next two games while scoring only two runs. Since that point, the Pirates have been hot wining four of five including three against the Nationals before a 8-7 win on Tuesday against the Minnesota Twins.

The other playoff team in the division the Chicago Cubs has struggled this past week despite picking up two of three wins to open the week over the Cincinnati Reds. Following the series with the Reds, the Cubs would be swept by the last place Phillies allowing 21 runs in the three game series. The Cubs would split the first of two against the Coloardo Rockies to open the week.

National League West: Then you move out West to a division that should be interesting to watch down the stretch as the Los Angeles Dodgers continue to hold a slight half game lead over the San Francisco Giants. Outside of these two teams it looks to be only a two team race as the Arizona Diamondbacks, San Diego Padres and Colorado Rockies have all failed to make significant ground on the top two teams despite those two teams struggling at points.

While the Dodgers currently hold the top spot in the National League West their recent play has allowed the Giants to make up some ground. The struggles started last Monday as they welcomed the Atlanta Braves. The Dodgers would lose the first two games before picking up the third game of the series and the first two of the next series against the Mets. Unfortunately the Dodgers couldn’t build any type of ground in the division as they would lose back to back to split the series with the Mets before losing the opening game against the Oakland A’s on Tuesday

One major flaw for the Dodgers this season has been their starting pitching outside of Clayton Kershaw and Zach Greinke. While the Dodgers have struggled, the Giants have made up some ground winning nine of their 11 games after the All-Star break. This includes the team taking two of three to open the week again to the Padres before sweeping the Oakland A’s over the weekend. The Giants would open up this week splitting the first of two against the Milwaukee Brewers.

For the rest of this division it should be an interesting next couple of days as the trade deadline approaches. The Rockies have already made one big move sending Troy Tulowtizki to Toronto for Jose Reyes and prospects. We expect the team to also move Reyes before the deadline as well as a potential deal to send Carlos Gonzalez away. Then you have the Padres who many believe could unload potential stars like James Shields and well as Justin Upton before 4 pm Et on Friday.

The playoff race in the National League should be an interesting one as teams fight for the final two wild card spots as well as both the East and West division.