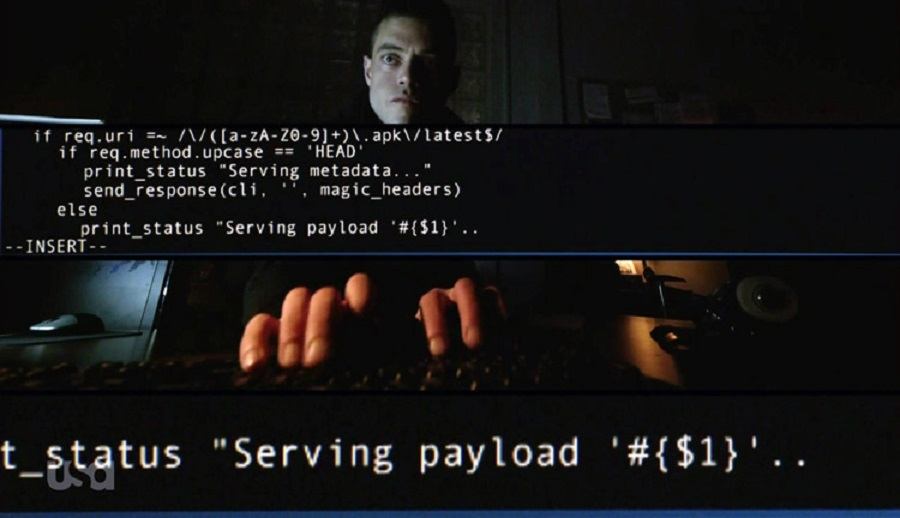 USA’s drama thriller Mr. Robot continued it’s 2nd season this week with the episode “eps2.3logic-b0mb.hc.” In it, Agent Dominique and her crew at the FBI travel to China to get more information about the 5/9 scandal. Meanwhile, Darlene resorts to asking Angela for help in hacking the FBI’s database.

While Elliot is busy working his magic on Ray’s computer and trying to infiltrate the FBI’s highly secured system, Darlene breaks into Angela’s swanky downtown apartment. After realizing that Elliot will be unable to break into the FBI’s system unless they are able to do a physical drop in their headquarters (which is currently located on an upper-level floor of E-Corp), Darlene tries to convince Angela to get in on the scheme. Darlene explains that Angela’s name is intertwined in all of the mess and to save herself, she needs to help them. Not surprisingly, Angela refuses to come to Darlene’s aid and tells her she rather risk being caught up in the aftermath than trying to hack the FBI. After Darlene’s brief visit, Angela begins thinking about her unintended involvement in the whole FSociety scandal. In particular, she is nervous about the fact that her not so bright, ex-boyfriend Ollie knows some things that could potentially incriminate her. 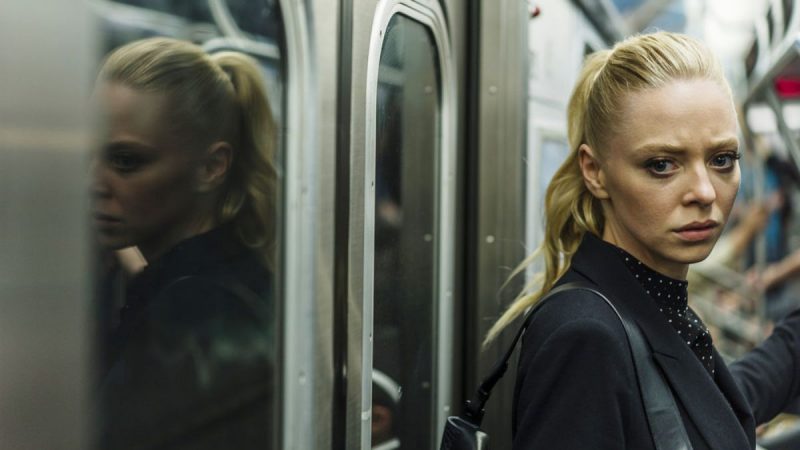 Not too long after, Angela is seen meeting up with Ollie to get some insight on what he may have spilled to officials. While Ollie thinks he is simply meeting to catch up with his ex (and perhaps even get a job at E-Corp through her), Angela ensures to get as much insight as possibly on what Ollie has blabbed. Ollie confesses that he told the feds about the “sketchy CD guy” but swears he never mentioned Angela’s name specifically. However, this confession is enough to get Angela on edge, and she finally comes to accept that she is going to have to get involved in Darlene and Elliot’s hacking scheme.

Meanwhile, Dominique and the FBI team head over to China to try and find out more about those behind the 5/9 hack. The crew heads over and meets with the Prime Minister of State Security, Zheng (who happens to be the male persona of White Rose, the leader of the Dark Army). Dom has a lengthy private discussion with the Chinese official, including candidly talking about the windy road that brought her to the FBI. It becomes evident that much of Dom’s life hinges on her career and thus, she is clearly not one to simply give up when the going gets tough. Unknowing of the Prime Minister’s true identity, Dom eventually spills that the Chinese hacker group Dark Army is one of the FBI’s lead suspects. In a moment of vulnerability, Zheng shows Dom his (note he is really a she – White Rose, to be exact – however, at this point he was utilizing his male identity as a respected Chinese official) closet of beautifully embroidered traditional Chinese gowns. Although Zheng claims them to be his sister’s, his loving adoration for them makes it clear that the dresses are actually his. At this point, it is fairly evident that there is an underlying internal struggle within Zheng, as it becomes increasingly hard for him to suppress his feminine identity (White Rose).

Back in America, Angela pays Elliot a visit. She offers to plant the equipment needed for Elliot and his sister to successfully wipe the incriminating information the FBI has on them. While Elliot is hesitant to getting Angela involved, he eventually accepts her help seeing as there are really no other options.

Elliot goes to Ray’s house to continue ‘working’ on the web work that Elliot had agreed to do last episode (although he merely wanted to use Ray’s computer for his own hijinks). Working with one of Ray’s buddies, Elliot discovers that Ray is the mastermind behind his own underground website. Titled “Midland City,” Ray’s website basically gives people access to every illegal thing under the sun (drugs, guns, etc.) Mr. Robot tries to convince Elliot to move on from what he discovered while working on Ray’s site. However, Elliot’s moral compass has him feeling paranoid about why he specifically was dragged into yet another “market of evil.” 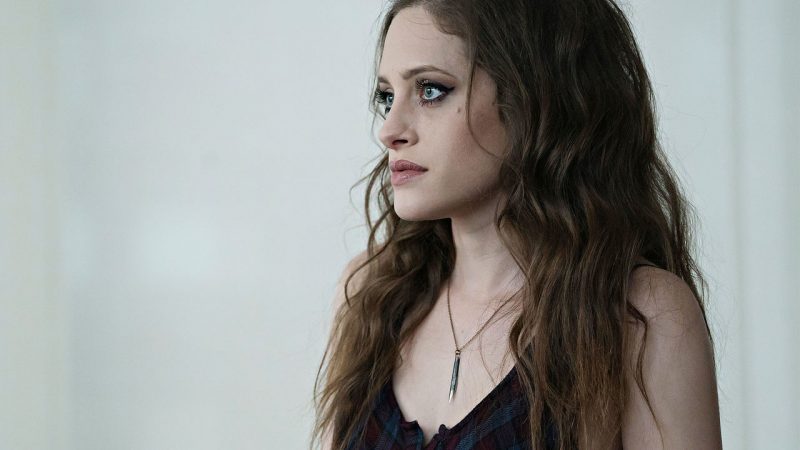 Towards the end of the episode, Dom is heard speaking with her colleagues. She is blabbing on about the private conversation she had with Zheng the other night. While the two appeared to be connecting at the time, Dom didn’t think twice before telling her partner all about Zheng’s closet of his “sister’s” dresses.  Dom noted that his impressive closet was particularly notable, seeing as she discovered Zheng does not even have a sister.

The last big hurrah of the episode was a huge shoot-out that went on at the FBI’s headquarters in China. With the information Zheng (aka White Rose) gathered from his conversation with Dom, it is likely that the masked gunmen were sent in order to get the FBI off of the Dark Army’s tail.

Meanwhile, Elliot is getting a serious beat down by Ray’s men, after it was discovered that he sneaked a peak at the contents of Ray’s underground site.

To sum it up, Dom has been confiding in the leader of the exact group she is desperately trying to unravel. Angela is reluctantly getting involved in Elliot and Darlene’s schemes in an attempt to save her own behind. And Elliot is figuring out there is more to Ray than what meets the eye.

You can catch more Mr. Robot next Wednesday, August 10 on USA 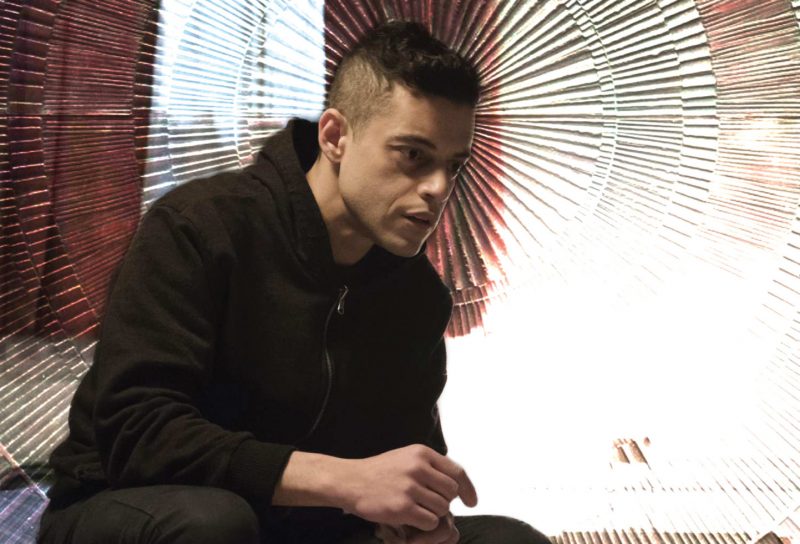 Next Week on Mr. Robot:

Mr. Robot tries to convince Elliot that he is actually useful. Meanwhile, Darlene and Angela’s plan takes an unexpected turn.