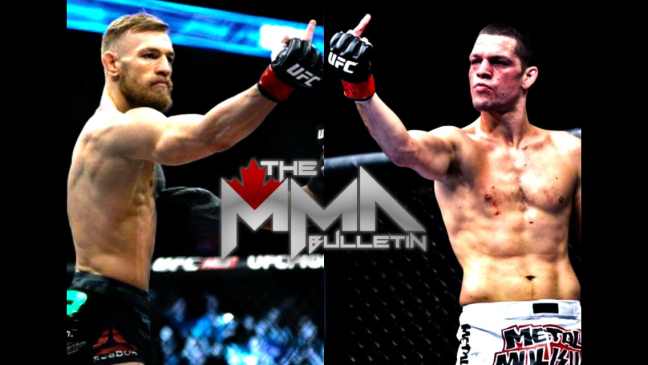 Between UFC 196 and Bellator 151 this weekend, fans most certainly had a lot of excellent action to enjoy. Let’s take a look at this action, as well as some of the week’s most important news developments!

UFC 196 will stand as one of the most interesting and upset-heavy pay-per-view shows of all time.

In the main event, featherweight champion Conor McGregor was submitted by the massive underdog and skilled veteran, Nate Diaz. In a fight that was largely battled on the feet, Diaz landed some solid jabs and straights of his own while moving with frequency, but still, the power and damage of the Irishman’s connected shots wore on his face after just one round.

The second featured more of the same to start, until McGregor evidently became exhausted, and was tagged with a stiff shot from Diaz straight down the pipe. A series of powerful blows followed, and in a telling moment, McGregor was forced to shoot in for a takedown. The BJJ prowess of Diaz took over, and within seconds, he had achieved mount, landed a series of hard strikes, and sunk the choke in. The tap came immediately after the Diaz began to torque on the technique.

This win is one of the most important of Diaz’s career, and in addition to garnering him a ton of new fans and a larger paycheck, it probably puts him in position to fight for a belt—welterweight or lightweight (and although he probably won’t be interested, given his last welterweight stint, the division really could use him).

For McGregor, the fight did well to drive the point home: the man takes chances. The Irishman didn’t have to move up a weight class after dominating the man who many believe to be the best of all time in thirteen seconds, nor did he have to fight Diaz on such short notice, nor did he have to stand and trade the way that he did! With all of the trash talk aside, McGregor is a fun, skilled, and unpredictable fighter who has a bright future. He should defend his featherweight belt at least twice more, against Jose Aldo and Frankie Edgar, and if successful, proceed to another super fight (what does the UFC have to lose, at this point?).

Miesha Tate versus Holly Holm was another incredible contest that certainly made clear the tenacity and resolve of the veteran Tate.

After a close first round that many believed Holm took (that demonstrated the competitiveness of the fight), the second was an absolute blowout for Tate, who took her opponent’s back and came close to finishing the fight via rear-naked choke, while encountering essentially no offense.

The third and fourth rounds saw an aware Holm use her movement and volume to clearly best, but not hurt or come close to finishing, Tate. In the fifth, it was clear that “Cupcake” needed to adapt and excel, and that’s exactly what she did.

A well-timed takedown would allow Tate to secure the back of Holm once again, but this time, an aggressive search for the submission was successful, and the rear-naked choke of Tate put the champion to sleep and allowed her to claim the belt.

This was a fun fight that, after its conclusion, likely caused many fans to reflect upon the general disorganization of the women’s bantamweight division. The solution to this chaos is simple: allow each woman to fight who she wants when she wants. Tate can defend her belt now or wait for a match in the future, and Holm can compete again or wait for Rousey to return. The thinking behind this free-form matchmaking is simple: the worst possible outcome for the UFC has already been encountered, in Rousey getting KO’d, as has the second-worst outcome, in Holm herself falling.

The rest of the main card wasn’t overly eventful, but the televised prelims brought it, and all of them are worth watching—specifically, Siyar Bahadurzada versus Brandon Thatch and Nordine Taleb versus Erick Silva.

As a whole, Bellator 151 was an excellent fight card.

In the main event of the night, undefeated prospect Darrion Caldwell defeated former champion Joe Warren via first-round submission, after dominating him like nobody else ever has. Caldwell outwrestled the Olympian Warren, used his superior strength and strikes in coordination with a modern and fast-paced jiu-jitsu game, and simply overwhelmed the opposition. This was easily the most impressive win of Caldwell’s career, and his shot at the belt should be awesome to watch.

Joe Warren, even at nearly forty years old, still has a good amount left to give to the sport and the promotion. The man is tenacious and skilled, and most certainly knows how to cut a promo; a fight with Sirwan Kakai would be enjoyable to watch next.

In the co-main event of the evening, the highly underrated Fernando Gonzalez defeated Gilbert Smith in the latter’s promotional debut. The former UFC fighter and TUF veteran was competitive, and this was a very close contest overall. Still, Gonzalez did enough to nab the win, and in the process, moved his Bellator record to an undefeated five and zero! Besides his kickboxing loss to Daley (which was much closer than many remember, and could have gone the other way), Gonzalez is on an impressive streak, and the originally scheduled match between him and Michael Page is the one to make.

Gilbert Smith is a high-level fighter who fought a close and grueling fight here, and a match between him and the high-level Chris Honeycutt would be awesome next.

The main card kicked-off with a solid fight between the Guam-born Joe Taimanglo and the high-level Sirwan Kakai, which ultimately saw Taimanglo walk away with the win after landing the more powerful overall strikes, attempting a couple of submissions, and largely being the aggressor.

Once again, this was an enjoyable card that showcased some of the promotion’s high-level fighters in three separate divisions and set the stage for big upward movements from each of the victors.

Rory MacDonald and the surging Stephen Thompson will clash in a pivotal welterweight contest on June 18th, in Ottawa, the UFC announced this week. Dominick Cruz’s next title defense was also revealed, as he will meet perennial-contender Urijah Faber for the third time on June 4th at UFC 199.

The first of these fights, MacDonald vs. Thompson, is an excellent one that should allow fans to enjoy some thrilling action and provide some clarity to a relatively barren welterweight division.

The second of these fights, the rubber match between Cruz and Faber, honestly isn’t very appealing. Sure, it’s an easy fight to sell given the bad blood between the men, but Faber has only won his last fight consecutively, falling to Frankie Edgar before that. Moreover, he was also defeated by former champion Renan Barao, and has received three cracks at UFC gold thus far, and this will be the fourth. To be clear, Faber is an incredible fighter and athlete, and I’ll certainly tune in, but there were probably better fights to make here—perhaps a Dillashaw rematch, or a battle between Cruz and Aljamain Sterling.

This week in MMA brought a ton of exciting news and fights, and next week will be interesting as well, as the World Series of Fighting will have the sole attention of the MMA community, as its event—which features an awesome title bout between Justin Gaethje and Brian Foster—will go down. Enjoy the fights!