This week in MMA featured an event from each of the three largest promotions, so needless to say, there was quite a bit of action to enjoy! This action was supplemented with a ton of exciting developments, stories, and announcements as well. 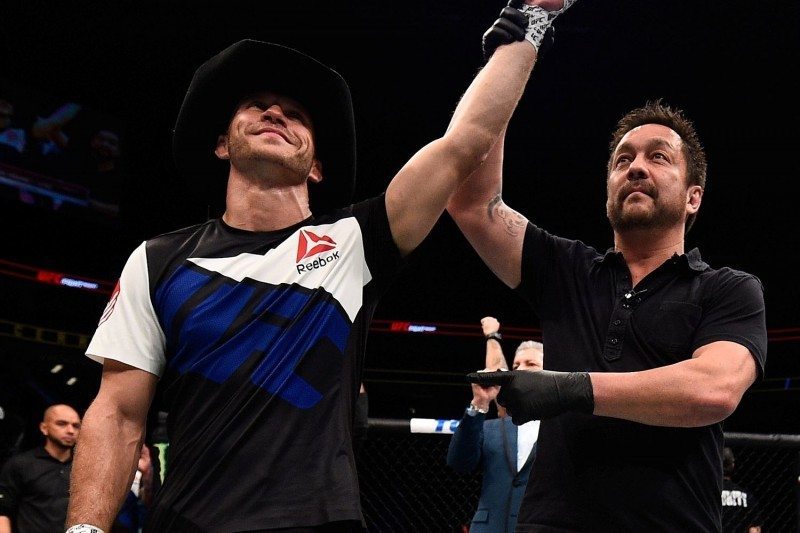 UFC Fight Night 83 was home to some generally exciting action, although there weren’t too many surprises to be found in the results.

In the main event of the evening, Donald “Cowboy” Cerrone won in outstanding fashion. Both Cowboys had some success on the feet for the first couple minutes of the contest, until Cerrone landed an outstanding takedown. From there, he quickly achieved mount, and not long after, completed a triangle choke which caused Oliveira to tap immediately.

This was a once again awesome win for one of the sport’s most exciting and fun-to-watch fighters, and there’s an excellent chance that he’s found a new home at welterweight.

In the co-main event of the evening, Derek Brunson made short work of Roan Carneiro, winning via first-round strikes. After Carneiro found himself on his back, Brunson simply refused to let-up, throwing a massive barrage of strikes which ultimately caused the referee to intervene (after Carneiro was allowed an ample amount of time to recover).

The rest of the main-card results are as follows:

Cody Garbrandt def. Augusto Mendes via first-round TKO (in a bit of an early stoppage)

Overall, this event wasn’t bad, but next week’s awesome contest between Michael Bisping and Anderson Silva, complete with its solid undercard, stands to be much better. 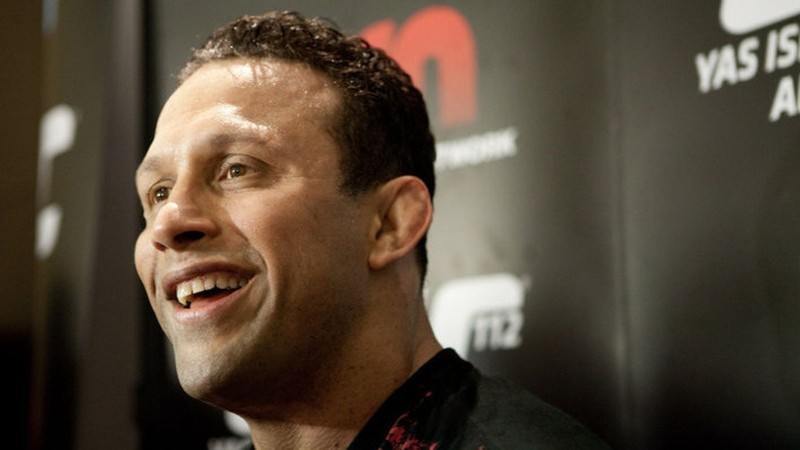 To say that Bellator 149 went off without a hitch would be completely untrue. But, the event did feature some undeniably unique and generally exciting action for fans to enjoy.

In the main event of the evening, Renzo Gracie nabbed yet another first-round win over Ken Shamrock, this time via TKO. Gracie, curiously, chose not to have his hands wrapped, being evidently confident in his kicks and his grappling.

It turns out that this confidence wasn’t misplaced. The end of the contest came when Gracie landed a solid knee to the head of Shamrock, before peppering the now-dropped competitor with a few strikes until the ref waved the match off. This win wasn’t without controversy, though, as Shamrock immediately claimed Gracie had landed a low blow, following the fight’s end. The fight-ending shot wasn’t low, but a replay did show that there was a knee to the cup landed by Gracie prior to the end of the fight.

Fans can certainly develop their own opinions and thoughts relating to the contest and the low blow, but this illegal strike, although inadvertent, undoubtedly had some effect on the match’s outcome.

The co-main event, to recap briefly, was a battle of cardio. Both Kimbo Slice and Dada 5000 would become unreasonably exhausted throughout the fight, until Dada collapsed from fatigue in the third round and Kimbo was declared the winner.

The rest of the card featured high-quality action from some of the top athletes in the promotion.

Former UFC fighter and submission specialist Daniel Pineda made his promotional debut against the awesome young Roufusport prospect, Emmanuel Sanchez, and was denied. This spirited affair between two of the best featherweights in the promotion saw Pineda come reasonably close to success with some positions and submissions, but ultimately, the ridiculous pace, toughness, and calmness of Sanchez proved to be too much.

Simply put, it’s worth following the careers of Pineda and Sanchez, especially in the case of the latter, who may very well hold the belt one day.

But, the performance of the night undeniably came from Derek Campos, who defeated Melvin Guillard via second-round strikes as a massive betting underdog. The high-quality fighter didn’t shy away from trading with Guillard, and after hurting him in the first round, capitalized to get the finish early in the second. This was only the second time that Guillard had been finished with strikes, while the other came against Donald Cerrone.

Guillard still has a lot left to give, but it’s important that he re-invent himself, given his current two-fight promotional skid (the fact that he didn’t make weight most certainly isn’t helping matters). The best way to do this is by moving up to welterweight. At 170 lbs., Guillard will obviously have a lot of weight to throw around, may possess a speed advantage over the competition, and will have access to a number of new and exciting contests.

Campos, in addition to being an outstanding competitor and constantly improving athlete at just twenty-seven years old, is a testament to the overall quality of Bellator’s lightweight division. Many fans had written him off, following his two prior losses to Michael Chandler and Brandon Girtz, whereas they really should have admired the quality of the competitors who he lost to!

On an off-topic note, the World Series of Fighting ranks each of their divisions, and personally, I think that this is a good idea for Bellator as well. Not only does the promotion have more high-level fighters signed than WSOF generally, but these fighters span across all divisions—although lightweight will probably be most notable.

Alright, there are eleven fighters listed, but you get the idea: rankings, attached to each fighter during a broadcast and generally, are a good idea for Bellator—especially since an easy top-ten can be filled for each division.

Now back to the final main-card bout of Bellator 149, a rematch between Emanuel Newton and Linton Vassell. This was a solid contest that saw Vassell ultimately walk away with the win, although it’s worth noting that Newton was docked a point in the second round as a result of a low blow. This close fight, where neither man dominated the other, now puts both competitors in a bit of an awkward position, having cleared out the rest of the division, barring the elite of the elite. Still, it’s not a bad spot to be, and realistically, either man (or both) can take another crack at the belt somewhere down the line.

Overall, Bellator 149 was enjoyable. It’s apparent that the promotion got the message relating to the age and general nature of its main and co-main events, though, as it announced its next tentpole event for May 14th, featuring King Mo versus Phil Davis and Josh Thomson against Michael Chandler—both awesome and high-profile fights that also play important roles in the outlook of their divisions. 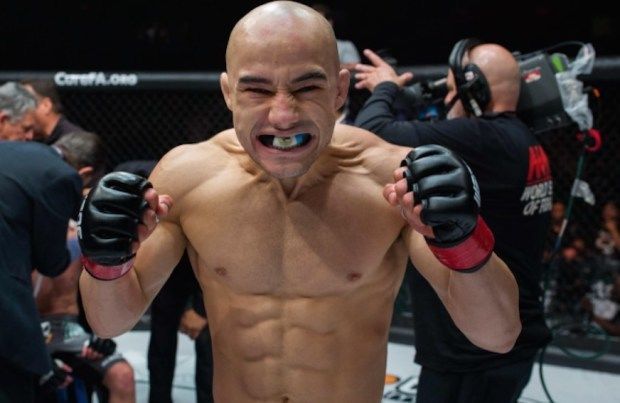 World Series of Fighting 28 went off without a hitch and contained some exciting action.

The main event, to the surprise of essentially nobody, featured bantamweight champion Marlon Moraes easily defending his belt via first-round TKO due to a leg kick. The ultra-powerful kicks of Moraes are now apparent to most everybody, even those who doubt the talent of fighters outside of the UFC.

Moraes, prior to this contest, talked about leaving the WSOF to explore the free market. I’ll go ahead and say what most everyone else was already thinking: this is an awful idea. Especially given his younger age, Moraes would do well to earn as much as he is in the WSOF for as long as possible. Not only does he get to compete against relatively weaker competition, in most cases, but he is making an impressive $130,000 per fight! This is more than the vast majority of bantamweights in the sport, and more than any other promotion would be willing to pay him, realistically.

The rest of the main-card results are as follows:

Chris Gutierrez def. Timur Valiev via Split Decision (an impressive win, given that Valiev is a training partner of Khabib Nurmagomedov).

Overall, this was a solid card that didn’t overstay its welcome, broadcasting in a short amount of time and at a quick pace. Moreover, this type of fight card serves as a good intermediary between the promotion’s larger and more exciting events. 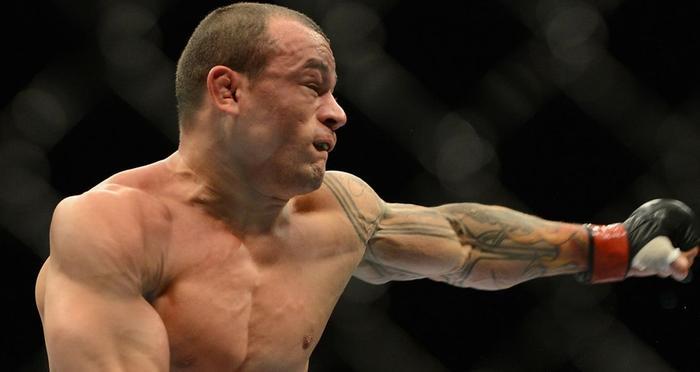 Gleison Tibau, one of the UFC’s most active fighters of all time, will be out of action for two years, retroactive to November 7th (the date of his last fight).

There isn’t much explanation or analysis needed here, other than a quick but obvious note that it’s good to see that UFC athletes are being drug tested frequently and without bias. 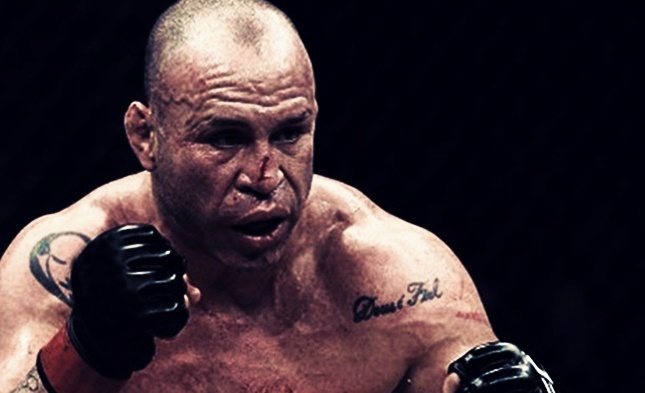 Wanderlei Silva Suspended for Three Years by the NSAC

The NSAC suspended “The Axe Murderer” for three years, for running out on a drug test administered in 2014. The suspension is probably a bit much in terms of time, but the NSAC hasn’t exactly been known for its intelligence and responsibility in relation to the preservation of the sport’s integrity.

Silva will probably fight abroad, where this suspension won’t be recognized. Former Bellator middleweight champion Alexander Shlemenko would be a good match-up in M1, as would Sokoudjou in Venator, and even Fedor Emelianenko in Rizin or elsewhere.

What Silva did was wrong and unacceptable, and he most certainly would have failed the drug test that he ran from, but at the same time, the NSAC has consistently operated without the slightest trace of dignity, respect, or knowledge for the sport of MMA. 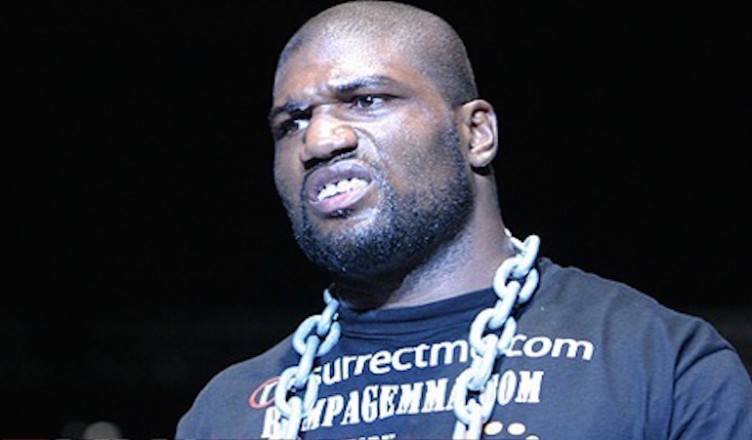 In an odd series of events, Quinton “Rampage” Jackson and Bellator MMA have announced that a reasonable all-around settlement has been reached.

Rampage, who claimed that Bellator didn’t meet certain provisions of his contract, ended up fighting Fabio Maldonado in the UFC, while still signed with the Viacom-owned promotion. The fight took place in Canada, and I’m still unsure of the legal footwork utilized by the UFC, but Bellator appeared unable to contest the action.

It’s nice to see that things have ended well, ultimately, as there are a ton of fun matches for Rampage in Bellator—even more than in the UFC, arguably, especially since Bellator is able to book “fun” matches.

A Series of New Fights are Announced

There were a ton of new fights announced this week as well, including:

—James Vick versus Glaico Franca at UFC 197 (another intriguing match)

—Caio Magalhaes versus Cezar Ferreira at UFC on Fox 19

—Patrick Cummins versus Antonio Rogerio Nogueira at UFN: Brazil on May 14th (a great fight, specifically because it is so evenly matched)

—Warlley Alves against Bryan Barberena at UFN: Brazil on May 14th

This week in MMA brought a ton of action and news for fans to enjoy, and next week stands to be awesome as well, as both the UFC and Bellator have solid events planned. See you next week! 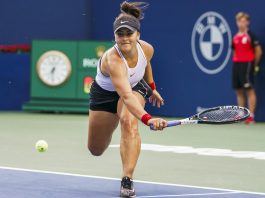