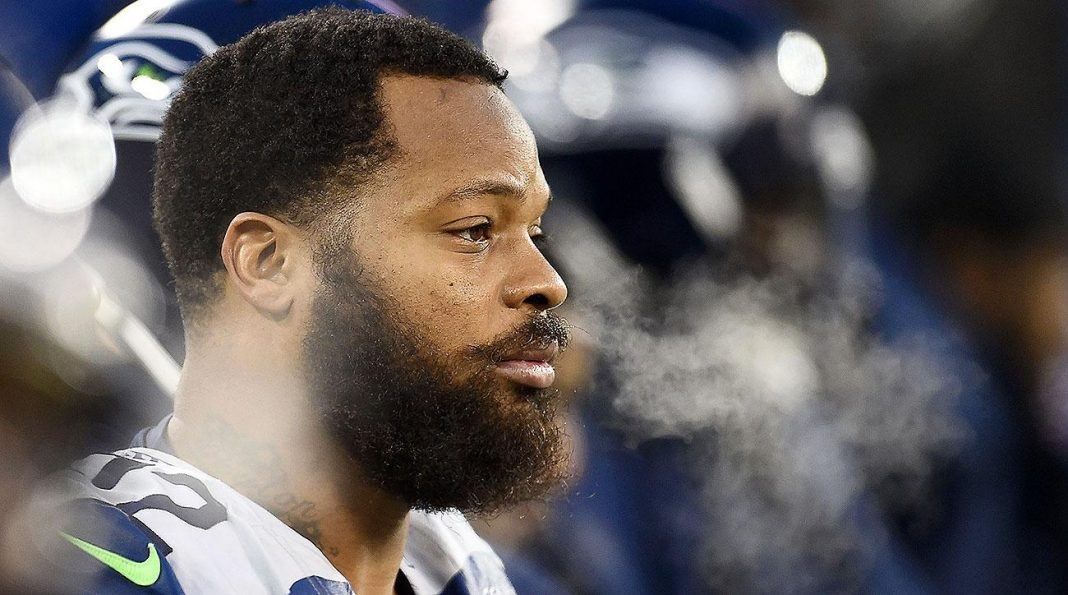 Seattle Seahawks defensive end Michael Bennett was having a great night in Las Vegas. After attending the super fight between Conor McGregor and Floyd Mayweather, he hit the town with some friends.

Things went downhill quickly, however. According to Bennett, gunshots were heard in the area, and everyone began to run. Bennett ran, too, and then a police officer singled him out and made him get on the ground at gunpoint, threatening to blow his brains out if he moved.

“I felt helpless as I lay there on the ground handcuffed facing the real-life threat of being killed,” wrote Bennett. “All I could think of was ‘I’m going to die for no other reason than I am black and my skin color is somehow a threat.’ My life flashed before my eyes as I thought of my girls…The officers ignored my pleases and instead told me to shut up and then took me to the back of a nearby police car where I sat for what felt like an eternity until they apparently realized I was not a thug, common criminal, or ordinary black man but Michael Bennett, a famous professional football player.”

Bennett’s announcement sent a shockwave through the NFL and the national news. Another incident of a white officer abusing people of color for doing nothing other than being black. A sea of reporters showed up in Washington at the Seahawks facility to ask Bennett for more details.

“It was a traumatic experience for me and my family,” said Bennett Wednesday while speaking to reporters at the Seahawks facility. “It sucks that the country we live in now sometimes you get profiled for the color of your skin. It’s a tough situation for me. Do I think every police officer is bad? No. I don’t believe that. Do I believe that there’s some people out there that are judging people on the color of their skin? I do believe that. I’m just focused on trying to push forward and keep…the quest for justice for people. Keep pushing the quality for oppressed people.”

Players all over the NFL immediate spoke out in support of Bennett, including NFL commissioner Roger Goodell, who praised Bennett as one of the best the league has to offer.

“Michael Bennett represents the best of the NFL—a leader on his team and in his community,” said Goodell. “Our foremost concern is the welfare of Michael and his family. While we understand the Las Vegas police department will address this later…the issues Michael has been raising deserve serious attention from all of our leaders in every community. We will support Michael and all NFL players in promoting mutual respect between law enforcement and the communities they loyally serve and fair and equal treatment under the law.”

Bennett’s quarterback, Russell Wilson, wasn’t thrilled to hear about the situation either, describing how much it hurts to watch someone you care about life through a situation like the one Bennett described.

“When you see a person you love, a person that’s your friend, a person who anybody honestly that’s put in a compromising position the way Michael was—it’s a matter of life or death, potentially all those situations that you see a lot of things are happening in our country right now,” said Wilson. “It’s heartbreaking when you think about.”

Of course, there are two sides to every story. Bennett believes that his civil rights were violated, and he is retaining an attorney and considering a lawsuit against the officers and the police department; however, now more details are beginning to emerge, and that early Sunday morning scene is a bit blurrier.

So, what happened? Bennett says that he was caught being black in the wrong place at the wrong time, but some witnesses saw otherwise. One witness reported that the police ordered everyone in the building to get on the floor and not to move as they tried to sort out the situation and find the source of the gunshots. Instead of complying, Bennett reportedly ran out of the casino, leading to his detention.

Now, on top of that, the Las Vegas Metropolitan Police Department confirmed that Bennett is actually under investigation for an incident that occurred at the hotel before his eventual detention outside of it.

“It’s fair to say the LVMPD is continuing to investigate whether Mr. Bennett was involved in the altercation at the hotel casino prior to his detention on Las Vegas Boulevard,” said the police department spokesman Larry Hadfield.

Do Bennett’s actions justify the police reaction? I mean, probably not. But now the plot has thickened. If the conflicting reports are true, then Bennett has blown this situation way out of proportion with inflammatory language. If Bennett’s side is right, then the Vegas police better hope he allows them to settle out of court.

NFL spokesman Brian McCarthy wrote in response, “There is no allegation of a violation of the league’s personal conduct policy, and therefore there is no basis for an NFL investigation.”