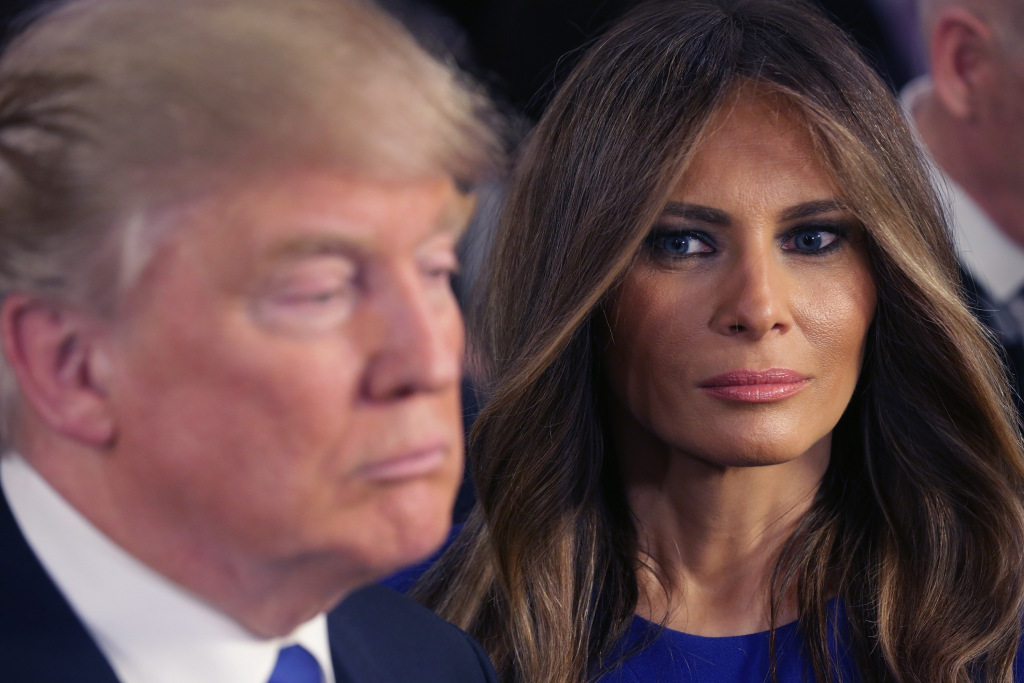 Melania Trump. The attention has been on her husband, Donald Trump, during the 2016 presidential election, but recently all eyes were on her during a CNN interview with Anderson Cooper. After watching her answer the questions about everything from Trump’s lewd comments, to his politics to the media’s portrayal of who he is, it has become clear to me that she, I and just about every other woman have something in common- we make excuses for men.

It comes as no surprise that she takes her husband side. As a wife, it’s just good practice to show a united front. Yes, she did say that his comments were wrong and admits to scolding him for them. But according to Melania, ultimately, the Trump that we see, the man he presents to the world, is not the Trump that she knows. At first, I was dumbfounded by her admission (still am a bit) but then I realized that all women have stood by their men at some point, even when they know he has done and said some pretty questionable shit. We are loyal to a fault and at times, to our own demise.

I am not taking up for Melania by any means. I’m just pointing out a fact. All women have done what she’s doing – saving face for her man. To be honest, in her interview it actually seemed like she was trying to remember what to say. I am sure his people coached her very well on how to answer certain questions, as they should. With that said, when it comes down to it, she is simply playing the role of the devoted wife. I would be lying if I didn’t say that I can see why people like her. She is somewhat likable. Not Michelle Obama likable (who is?) but the way she presented herself in the interview was pleasant and gave the notion that she is her own woman. Nonetheless, even in the face of questions clearly based on things that came out of her husband’s mouth, she chopped it all up to “boy talk” and blamed the “opposition.”

“I heard many different stuff — boys talk… The boys, the way they talk when they grow up and they want to sometimes show each other, ‘Oh, this and that’ and talking about the girls. But yes, I was surprised, of course… Like I don’t know that person that would talk that way, and that he would say that kind of stuff in private. This was all organized by the opposition. And with the details … did they ever check the background of these women? They don’t have any facts.”

Furthermore, Melania said she told her husband, “The language was inappropriate. It’s not acceptable.” She also said that she doesn’t recognize this man. This is all hard for me to believe. There is no way in hell that this woman can say she never saw an inkling of anything that sent off red flags about Donald Trump possessing these kinds of sexist characteristics.

But that’s what we do. We look the other way and shake our heads when confronted with that which we don’t want to accept about our men. We have got to come to a point where we stop making excuses for them. We have to hold them accountable and not feed into their delusion. I remember when the Bill Cosby situation was at the height of media of attention, a lot of women, including myself at times, tried to reason within and with others how Cosby is indeed the victim of a conspiracy or something sinister. Never mind the court documents in which he admits to giving women drugs for the purposes of sleeping with them. Never mind the reality that, yes, this man is a womanizer. In our attempt to be the strong, helpful, nurturing human beings that we are created to be, we dismiss the facts and follow our hearts. We have got to learn when to say, “Enough is enough.”

Now, for Mrs. Trump, clearly she can’t flat out confess, “Yes I agree with everyone else; my husband is a pig.” There is a presidency and a legacy at stake here. But people want to hear from her and need to know where she stands in all of this. Thus far, she has given us the same rhetoric that her husband, his campaign and his supporters have given. I can’t say that I am mad at her because, again, what do we really expect? She has no choice. That doesn’t make her dismissal of the hard evidence right. She is just as much in the wrong as her husband for saying that he was “egged on” to comment on how much he likes to, “grab women by the pussy.”

There are a lot of things that blind us to the truth – love, power, sympathy, and tradition. However, when it comes down to it, we have to look at the facts and realize that the men we so desperately want to defend, protect and shelter, many times, aren’t worthy of that energy; not worthy of that kind of commitment.

I pray that I am never too involved that I am willing to risk something as important as the future of a country to enable a man to have his way.