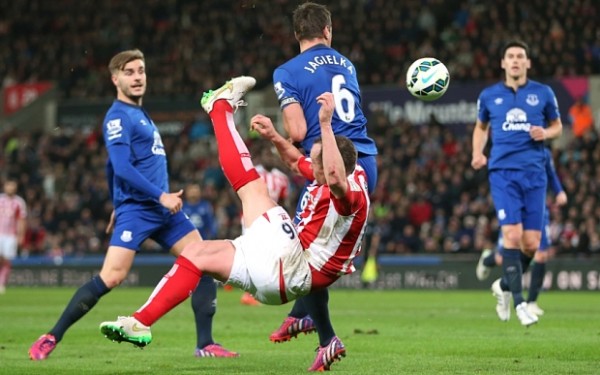 The Tenth-placed Stoke City will play host to the Merseyside club Everton over the weekend. Both the teams suffered losses in game week 23, and they’ll look to bounce back at the Britannia Stadium.

Mark Hughes’ men were outclassed by Manchester United in the midweek clash at Old Trafford. Stoke lost 3 – 0 on Tuesday, their ninth loss of the campaign. Stoke haven’t picked up three points since the 3 – 1 win over Norwich at home last month, and they will be low on confidence going into this fixture after suffering two back-to-back losses in the Premier League. Not only that, the Potters got knocked out of both the FA Cup and the League Cup in a span of one week. They certainly are in a bad phase, and nothing other than three points can lift the mood of the Stoke faithful.

Everton won 3 – 0 at home against Newcastle on Wednesday. They won the FA Cup fourth round match against Carlisle, but they were beaten by Manchester City in the semi-final of the Capital One Cup. The Toffees won’t be facing their arch rivals Liverpool in the league cup final at Wembley this season. The Goodison Park dwellers have won only one of their last six fixtures in the Premier League. After three draws and two losses in their last six games, Roberto Martinez’s team remain in the bottom half of the table.

Seven goals were scored when these two sides faced each other in the league in December last year. Stoke narrowly edged the hosts at Goodison Park with the final scoreline 4 – 3. Xherdan Shaqiri and Romelu Lukaku netted two goals each in the match which was decided in the injury time by Arnautovic’s spot kick.

Stoke City need a positive result at the weekend, but it will be very difficult for them to grab all three points against a motivated Everton side. A draw seems to be the most probable result. Prediction: Stoke City 1 – 1 Everton.