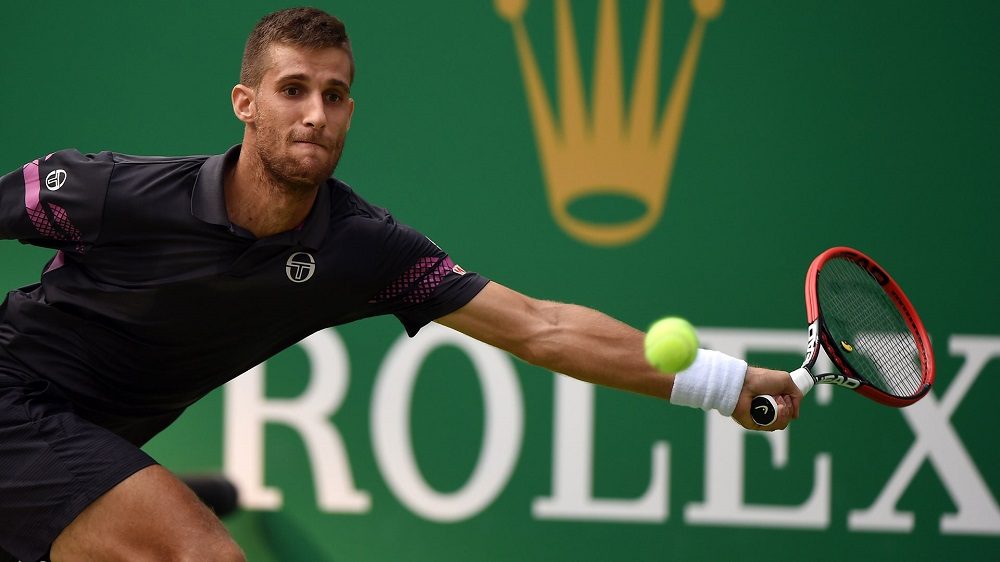 There weren’t many high-ranked players in action over the last week. However, the ATP still featured a bunch of matches in three tour-level events. With all the results settled from Hamburg, Newport, and Bastad the most-recent titlists on tour are Martin Klizan, Ivo Karlovic, and Albert Ramos-Vinolas.

For Klizan, his title will result in a significant jump in the rankings as he picked up 500 ranking points in Hamburg. That’s more than you get for making a Grand Slam quarterfinal and, for a player like Klizan, the volume of points is a total tidal wave.

Furthermore, he has certainly proven himself to be a strong tournament closer as he is undefeated in all of the finals that he has made it to on tour. The Slovakian, following his 6-1, 6-4 victory over Pablo Cuevas in the final, is projected to climb about 20 spots in the rankings on Monday.
Klizan spoke about his return game after the match:

“I think I have quite a lot of weapons and my return is my secret weapon. I was returning great today and put a lot of pressure on Pablo’s serves. He had a couple of games on his serve where I had no chance, but when he hit a second serve, I was trying to put the ball inside the court and put pressure. That’s why I broke his serve many times.”

In Newport, a grass-court tournament in the United States, the saga of Gilles Muller continued. The Luxembourgan has quietly enjoyed a string of successful tournaments over the last few months. However, despite some solid runs of late, Muller remains one of the highest-ranked players without an ATP tour-level title.

At the age of 33, he is now 0-5 in championship matches and you have to think that time may be running for him. For that reason, his loss in the Newport final to Ivo Karlovic on Sunday has to be particularly painful. Muller won the first set of the final, but then he lost the second set by the minimum two points in a tiebreaker. Muller also lost the third set by the minimum, and he missed multiple match points in the set.

On Monday, Muller should be ranked 36th in the world and, while there are higher-ranked players without any titles, those players are young guns Alexander Zverev and Lucas Pouille – not veterans like Muller. The Luxembourgan spoke about his title drought following the loss to Karlovic:

“Having match points, being so close to winning my first title and not winning, it’s tough,” he said. “(Karlovic) played good. He came up with the big shots, with the right shots in the big moments and that’s what makes you win those matches.”

For Karlovic, the addition of a title at the age of 37 is incredibly impressive. With a projected Monday ranking of about 35th, he’s the oldest player in the Top 100 and the third-oldest player in the Top 500 (Radek Stepanek is older and so is Ruben Ramirez Hidalgo). The Newport title was his 7th career title and third on grass. True to his form, he played a lot of tiebreakers on Sunday, winning the match in the maximum number of games possible in a three-setter 6-7, 7-6, 7-6.

As always, the 6’11” Croat relied on his serve to get the job done:

“In the beginning… I didn’t really feel my serve. I was a little bit doubtful. But I just tried to hang in there and tried to get to a tie-break any way I could. That was key. I was trying to get my serve better and as the match was going on I was serving better.”

The last tournament that recently saw completion was ATP Bastad. Albert Ramos-Vinolas demonstrated that his quarterfinal run to the French Open was no fluke as he won the clay-court event. The Spaniard claimed only his first title with a 6-3, 6-4 victory over Fernando Verdasco.

“If you don’t play with focus 100 percent of the time,” Ramos-Vinolas said, “you won’t beat anybody.”

The US Open is still weeks away however, there’s still tons of tennis upcoming on the men’s tour. ATP Washington, ATP Kitzbuhel, ATP Umag, and ATP Gstaad will all be running from Monday until next weekend. Then the Rogers Cup gets underway in Toronto, a tournament that is part of the Masters Series. Not long after the conclusion of that event, players that aren’t afraid of the Zika virus will head to Rio to contest the Olympic draw.