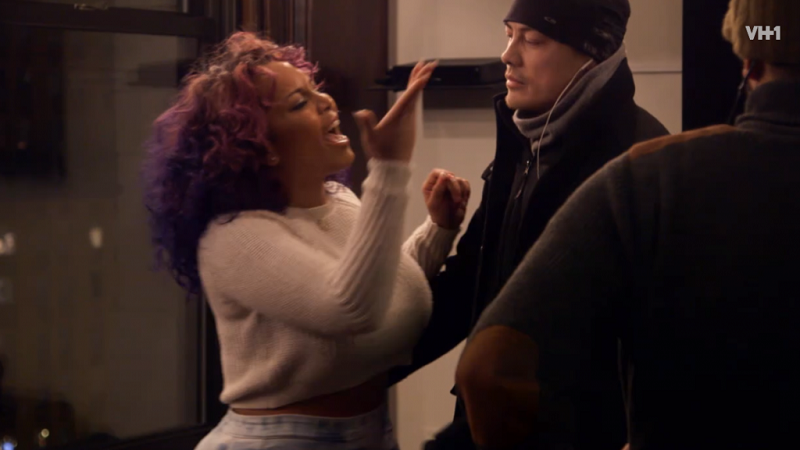 Love and Hip Hop is almost over, but that does not mean that they aren’t going to give us something to still tune into every week.

The show opens up with Yandy talking to her girl Kimbella about what Mendeecees did with saying that Amir was in the hospital. She can’t seem to move past it and they are literally not talking to each other. Kimbella tells her that she is wrong just as much as Mendeecees and that she should be the “bigger person” by just apologizing. You know that Yandy is not feeling that.

They end up meeting after he talks to Peter Gunz (of all people) and he decides to be the bigger person apologizing first which he should have done because Yandy is pregnant. He should have gotten her attention some other way.

Yandy accepts his apology but still has some unfinished business with Remy. Kimbella meets her at her office because she just happens to be around. Yandy calls Remy into a meeting to pretty much fire her because she had no business interfering with their argument. Remy comes in (without knocking) and things get heated quickly. Yandy tells her that this is her last exchange with her and that she already had her last exchange with Mendeecees. As Remy tells Yandy “hell no” Kimbella is itching to put this girl in her place, which she does when Remy says “Tell your pit to stay in her dog house.”

Then there’s Diamond. This chick just keeps showing her age (or at least her childish mindset) every episode. She meets with her “friend” Marge about what happened with Cisco and how he dissed her after Rich gave him the letter. She also tells her how Rich has been wooing her because he’s sweet and attentive. Um hello crazy girl, he wants in those pants. Get smart chick.

Later, she meets him at a restaurant and he tells her what Cisco says about him not messing with her to which she goes buck wild. She tells him to fuck Cisco and to “treat yourself.” This girl is a psycho because she goes from “fuck that shit” to “you’re so cute.” She then asks him what he wants right now and he says “To take you into the backroom and knock your screws loose.” This bitch is gonna say, “Then let’s go.” They walk into the bathroom and all we hear is “Mic off.” Real classy Rich.

After their romp fest, Diamond decides to show up to an even that Rasheeda is hosting which Rich attends to support. She immediately goes in and says that any girl that keeps trying to step to Rich “will get fucked up.” Rasheeda calls her bat shit crazy. Diamond meets Cyn and comes off straight loco. She proclaims Rich her boo to which he says (during his confessions) that they are not together, she is not his girl and that “whatever happened in the bathroom with strawberry, was meant to be left there.” Come on Rich. Why are you playing? Now you got this crazy ass bitch telling every chick she meets that you’re her man and that she will fuck them up.

Tara later meets with Rich to talk to him about here new business giving etiquette advice to artists. He throws Jhonie Blaze her way because “she’s kind of crazy” and Jhonnie joins their meeting. Tara can see that there is a thing going on between the two of them.

It seems that after Amina put her foot down on Peter coming back into her life, he seeks to give back to the community by meeting with young guys who are thugging on the streets so that they can do better and not walk down the road they did.

After the talk, of course they catch up, and Peter gives him the low down on Amina and Tara. “I’m only guilty of loving two women at one time.” Um Peter… boo, boo, you are guilty of a lot more than that.

With that, through everything that has been going on, Tara is showing immense growth. Lik she is shocking me. She and Amina meet for a playdate with Corey and the boys and Amina pours it all out on her. This is an awkward moment because Tara is listening to the woman who “stole” her man say that she can’t do it anymore.

Speaking of the grim master, Peter and Amina are back in the studio but that does not mean that they are back together. She shows up and tells him that he needs to leave the apartment and not come back to the house. The thing that I don’t get with Peter is how he turns it around on her always. She says that she wants a break and he says that you saying that “sends me out there in the world.” Nigga did you just say that her kicking you out for cheating and loving two women is her making you act single. You were already doing that. Like literally, I can’t.

The episode ends with Tara’s business launch party and Rich throwing his weight behind her. He shows up with Jhonnie Blaze who is one of her clients. Chrissy and Rasheeda show up and she asks him about Diamond (his new joint). He tells them what happens and of course they make fun of him because it is clear that she is another level of crazy.

So the stalker Diamond shows up and sees Rich and Jhonnie making a toast. He asks her, “Why you walk in here all aggressive.”  Jhonnie asks what’s going on and Diamond tells her that she is not talking to her. Blaze throws her glass in her face and of course they fight. In all of this, it’s Rich’s fault. He is playing with these chicks and enjoying it.. Newsflash forty something year old Rich Dollaz, having young girls fight over you is NOT THE BUSINESS.

The previews for next week look promising so come back next week to get a low down of all the craziness.