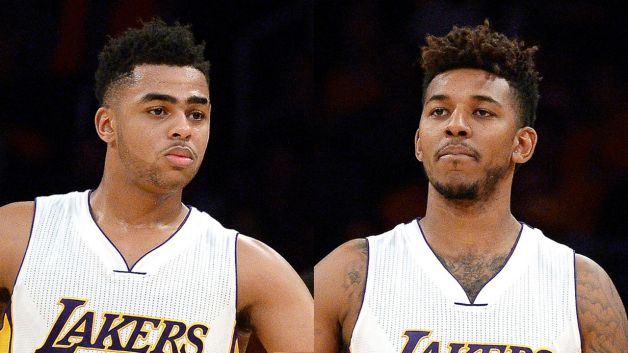 Los Angeles Lakers No. 2 overall pick and NBA Snitch D’Angelo Russell has been in hot water all week after a video he recorded surfaced in which teammate Nick “Swaggy P” Young admits to cheating on his fiancée, rapper Iggy Azalea.

Needless to say, things have been a bit awkward since then. The Lakers weren’t exactly the best team in the league before the video leaked, and now, according to multiple sources and players, there is no trust at all. Tensions are at an all-time high, Kobe Bryant is playing his last few NBA games, and head coach Byron Scott described the fallout from the situation as “just like rebuilding a team.”

“There’s an elephant in the room, especially when those two guys in the locker room,” said Jordan Clarkson.

I guess ruining one of your teammate’s marriage doesn’t sit well with the rest of the roster. Who would have known?

Things are so bad in the organization that the team can’t even agree how to react to the craziness.

“All I can say is in our era, it probably would have been handled differently. And I’ll leave it at that,” said Coach Scott.

“I’d get physical back,” fired back Russell after hearing what older players around the league were saying about the situation. “It’s a point where you try to solve it the right way, and I don’t know the words.”

Same here, D’Angelo. I couldn’t figure out how to describe what I was looking for to the Walmart employee the other day, so I just knocked him out instead. At least neither of them did anything stupid.

“We felt it, but D’Angelo handled it the right way,” noted Clarkson. “He looked us all in the eyes as men and apologized.”

Well, good news for the other 29 teams in the NBA, if anyone is interested in the services of a 30-year-old, soon to be single guard, Swaggy P will be on the trade block once again this summer.

At his best, Young is an extremely inconsistent player with a knack for having his few highlights retweeted left and right, convincing light watchers and heavy Twitter users that he’s a decent player. At his worst, Swaggy is an atrocious guard with a shocking 0.6 assists per game average and a dismal 33 shooting percent on field goals.

I could continue to rip into Young, but he just lost his girl, so I’ll cut him some slack. I’m sure Iggy’s next album will go into more detail (like anyone will hear it anyways).

Young has been available for trade for the last two seasons to no interest. Maybe it’s the nearly $6 million player option for the 2016-2017 season in his contract. That’s a hefty price tag for a celebrity presence.

Russell, on the other hand, has had a solid rookie season, and the Lakers still believe that he will be the future of the franchise after Kobe retires. Although his numbers fail in comparison to No. 1 overall pick Karl-Anthony Towns or No. 4 overall selection Kristaps Porzingis, Russell will most likely remain on the roster for next season despite reported interested from the Boston Celtics who plan to make an offer after the season is over.

Either way, Russell has a big of growing up to do. Even Coach Scott has compared the point guard to a 14-year-old in the past. I don’t care what the basis of your friendship is; you can’t record something like that. Sure, you can argue he did the right thing from Iggy’s perspective, but now he has to live with the stigma of the situation for the next few years at the very least.