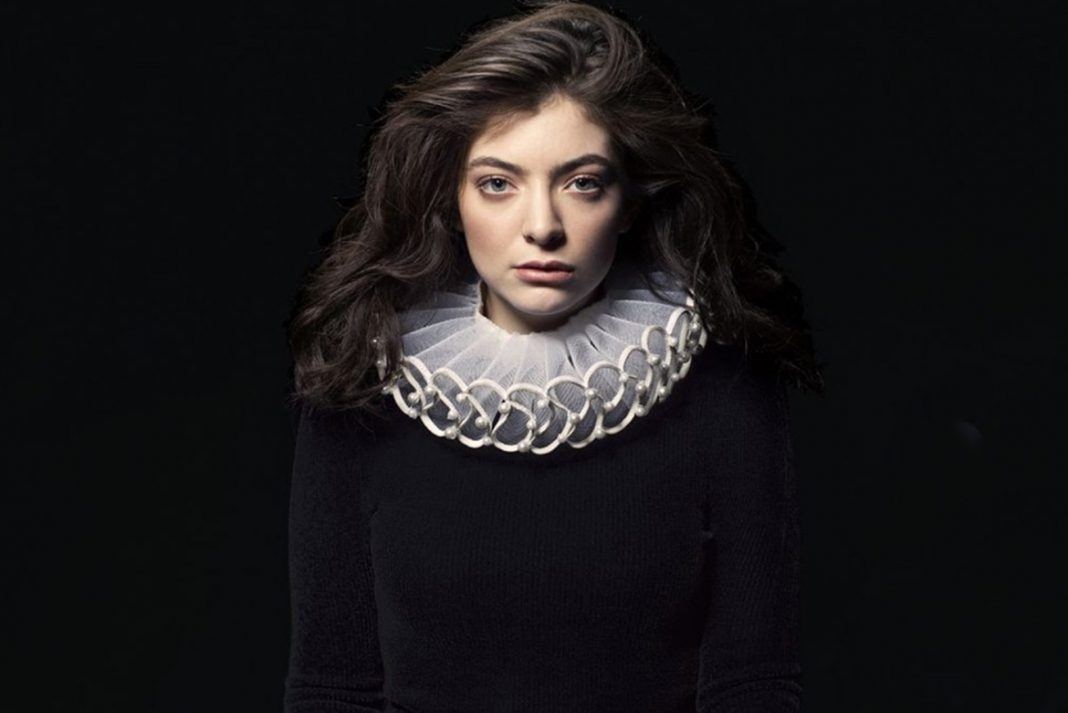 With the recent release of her latest album Melodrama, New Zealand-born songstress Lorde is busy promoting and performing her new songs. While the album has only been out a few weeks now, it already has produced several hits, including the songs “Greenlight” and “Perfect Places.”

On Wednesday (July 5th), the 20-year-old talent took the stage in Sydney, Australia. While performing for a crowd at Nova’s Red Room on Cockatoo Island, Lorde spoke candidly about the experiences that influenced her new album. In between songs, Lorde told the audience, “it’s all of the most intense saddest that you’ve ever been, or the happiest you’ve ever been. Or it’s feeling as lonely as you can possibly imagine, sitting in your living room touching your own cheek just to feel like someone’s there. That’s Melodrama.”

Previously, the star talked to magazine publication Vanity Fair about the inspiration behind her latest album, as well as what prompted her to give it the name “Melodrama.” In an exclusive interview, Lorde told Vanity Fair, “It’s a nod to the types of emotions you experience when you’re 19 or 20. I had such an intense two years, and everything I was feeling—whether it was crying or laughing or dancing or in love—each of them felt like the most concentrated version of that emotion. I also have a love of theater, and I love drawing a parallel with Greek tragedies. But there’s definitely an element of tongue-in-cheek; it’s very funny to title your record Melodrama.”

You can now listen to Melodrama, in full, on most music streaming platforms. 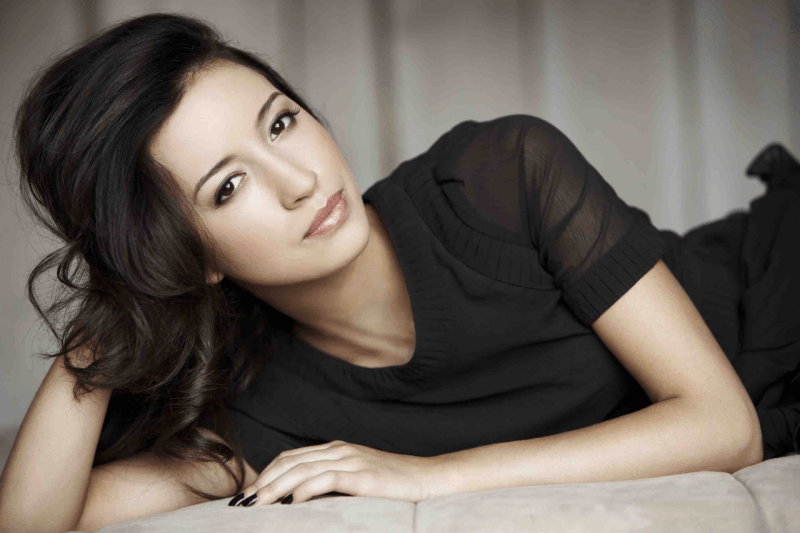 While she may be on one of TV’s most popular and beloved shows (i.e. AMC’s The Walking Dead), actress Christian Serratos is not immune to Internet trolls and their hate. Just recently, Christian shared a photo of her breastfeeding her newborn while showing off a glitzy custom necklace at the same time. Unfortunately, like many female stars before her, Christian received ample backlash from her followers who did not feel the photo (or, more specifically, her displaying herself breastfeeding) was appropriate.

Along with hundreds of other comments, Christian received posts from users in response to the image like, “Oh stop looking for attention…yes you can feed your baby in public, who cares? But, why purposely draw attention to it?”

Admirably, Christian decided to stand up to her haters and speak out against their misplaced judgment. In response, the brunette beauty posted another picture to her Instagram, which also featured her breastfeeding. Alongside the response post, Christian captioned, “This is my body and my page. So I will post what I want, when I want. Those who disapprove can suck my left t**.” 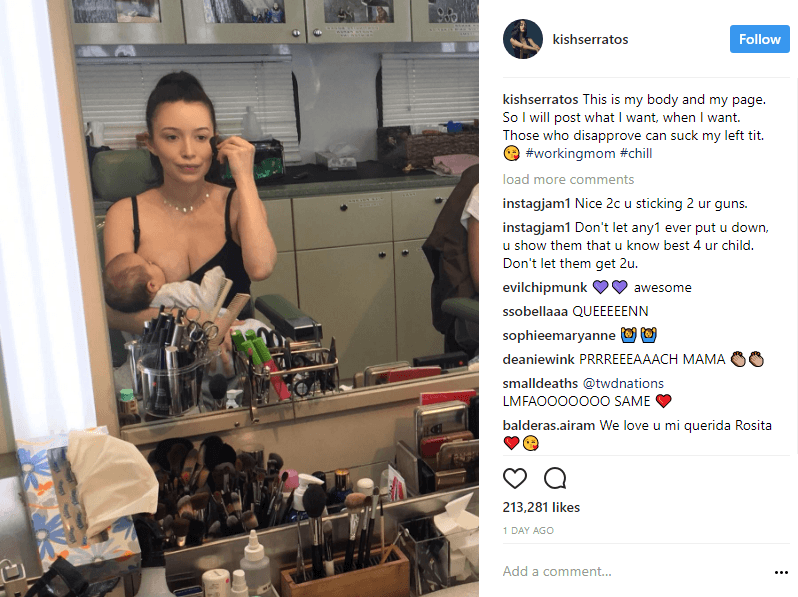 Back in March, Christian announced that she was expecting her first child with her husband David Boyd. In May, on Mother’s Day, the star gave birth to her new family addition.

Needless to say, Christian is just as fierce and outspoken as her character on The Walking Dead (note: Christian plays Rosita Espinosa on the show). 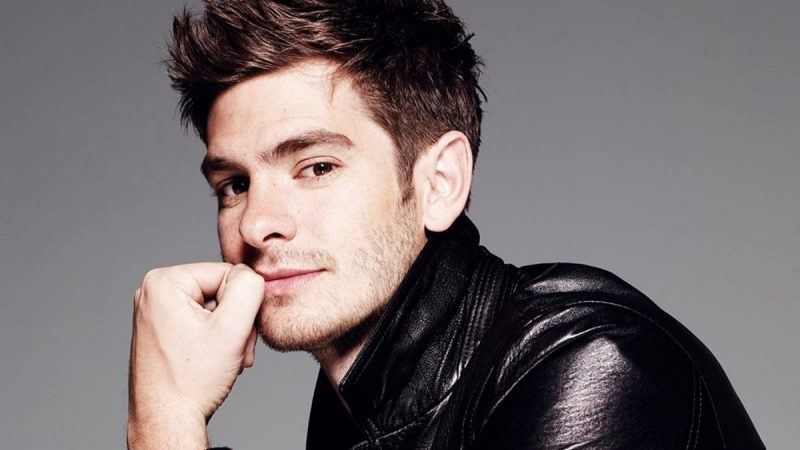 Andrew Garfield was roundly mocked on Thursday for saying during a panel discussion that — after preparing for a role as a gay man in the play “Angels in America” by watching “every series of ‘RuPaul’s Drag Race’ ” — he is a “gay man right now just without the physical act.”

Later in the conversation, he clarified, “As far as I know, I am not a gay man.”

He went on, “Maybe I’ll have an awakening later in my life, which I’m sure will be wonderful, and I’ll get to explore that part of the garden, but right now I’m secluded to my area, which is wonderful as well. I adore it, but a big concern was what right do I have to play this wonderful gay role?”

On Twitter, one user sneered, “Hey did you know that if you marathon ‘Drag Race’ you are a gay man? That’s all it takes. Who knew,” while another withered, “Andrew Garfield is ‘gay without the physical act because he watches ‘RuPaul’ — Rich Straight White Men Try To Be Interesting Vol. 53.”

speaking of, i am rich without the physical act https://t.co/UlWxuxUnB9

A third said, “Speaking of, I am rich without the act.”

Me when Andrew Garfield said he's a gay man "without the physical act" because he watches RPDR in his free time pic.twitter.com/UrSu1AnFpn

But LGBTQ activist and Savage Lovecast host Dan Savage was more sanguine. “With the world on fire . . . I’m having a hard time getting worked up over Andrew Garfield,” he wrote.

Many have said that the funny thing is, is that if Andrew Garfield actually did come out, no would be surprised in the least, or really care. 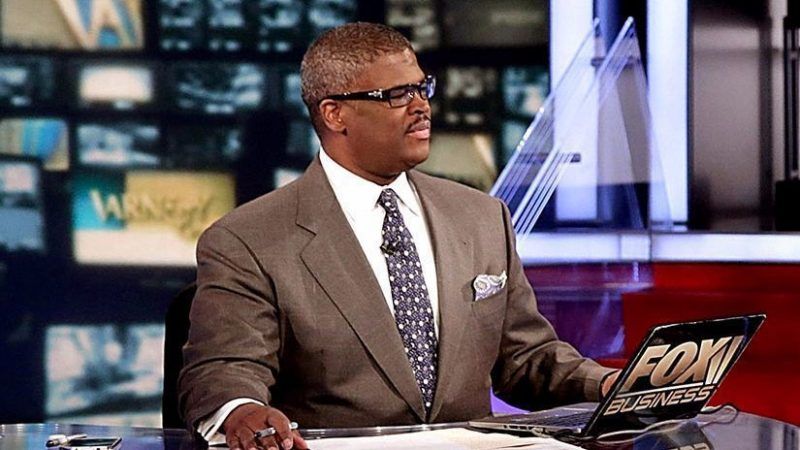 A Fox Business Network host has been suspended after a contributor reportedly accused him of sexual harassment.

The Los Angeles Times, citing two anonymous sources, reported that Payne had been accused of harassment by a female political analyst who appeared on Fox Business.

“We take issues of this nature extremely seriously and have a zero-tolerance policy for any professional misconduct,” a Fox Business Network representative said in a statement. “This matter is being thoroughly investigated and we are taking all of the appropriate steps to reach a resolution in a timely manner.”

An attorney for Payne didn’t immediately respond to a request for comment Thursday night.

Attorney Neal Korval told the Los Angeles Times his client denies any act of sexual harassment against the woman.

The suspension followed a National Enquirer story Wednesday in which the tabloid said Payne acknowledged a three-year extramarital affair with a female political analyst.

The Times reported Thursday that the woman contacted a law firm representing Fox to lodge a claim of sexual misconduct. She alleges she was blackballed from Fox after she ended the affair, the paper said.

She was a frequent guest on Fox Business Network and Fox News Channel from 2013 to 2016, according to the Times.

The paper withheld her name, citing the nature of her allegations, including a claim that she was coerced into a relationship with Payne.

A series of sexual harassment claims has shadowed units of the media giant, including Fox News, and led to the ouster of such prominent figures as Fox News chief executive Roger Ailes and host Bill O’Reilly.

Ailes died last May after a fall at his home.

O’Reilly hosts his “No Spin News” podcast on his website, www.billoreilly.com, contributes to Glenn Beck’s radio program on TheBlaze and continues to write books in his best-selling series of historical “Killing” books, including his upcoming release, “Killing England: The Brutal Struggle for American Independence.” 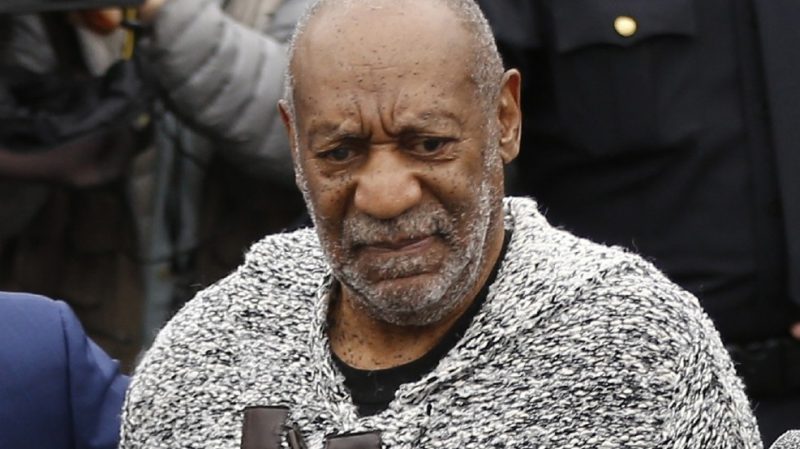 Bill Cosby will be retried in November on charges he drugged and molested a woman more than a decade ago after a Pennsylvania jury deadlocked on the question after deliberating over six days.

Cosby, who turns 80 in July, was ordered Thursday to be ready for trial on Nov. 6. He is accused of giving women he met three pills that knocked her out before sexually assaulting her at his home near Philadelphia. Cosby did not testify at the trial, but in a deposition in the woman’s civil suit called the encounter consensual.

Accuser Andrea Constand testified for seven hours over two days. She said she never gave the actor and comedian consent to engage in sex acts with her. Instead, she said, she considered him a mentor. She was a 31-year-old operations director for the women’s basketball team at Temple University, where he, then 66, was a TV icon and the school’s most famous booster.

Her lawyer said she took the deadlock “better than anybody” and is not afraid to confront Cosby in court again.

“She will be absolutely ready,” said Dolores Troiani, Constand’s lawyer. “She wants to see justice done and she wants to see this through. She was in the courtroom (after the deadlock) comforting everyone else.”

Prosecutors found themselves back to square one June 17 after the judge declared a mistrial. The jury failed to reach a verdict in more than 52 hours of deliberations.

Cosby, in his deposition, acknowledged giving a string of young women pills or alcohol before sexual encounters over the past 50 years.

District Attorney Kevin Steele, who pursued the case after an earlier district attorney declined to press charges in 2005, is determined to put Cosby on trial again. Constand went to police in January 2005 to say Cosby had drugged and violated her a year earlier. She left Temple in March 2004 to return home to suburban Toronto. She is now a massage therapist.

“In my head, I was trying to get my hands to move or my legs to move, but I was frozen,” Constand, now 44-year-old, said in their long-awaited courtroom confrontation. “I wasn’t able to fight in any way.”

Defense lawyers Brian McMonagle and Angela Agrusa declined to comment Thursday on whether they would be aboard for the retrial. Cosby’s publicist did not immediately return a call for comment. 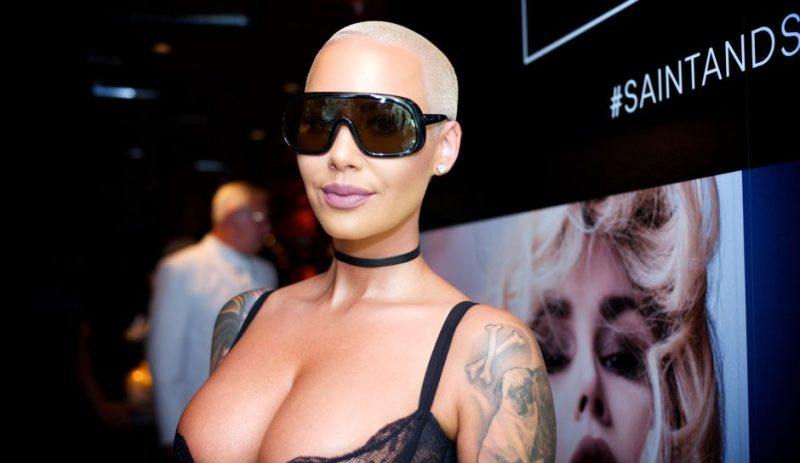 Amber Rose left nothing to chance when she posted her now-infamous nude photo to Instagram.

“I had them Photoshop out my tattoos to focus on the bush alone,” the model, 33, told Refinery 29 this week. “I feel like as women, we always feel like we need to shave or wax — and if we don’t, then we’re considered unkempt or unclean or we’re gonna smell funny. I believe that it’s natural and we shouldn’t be ashamed of it.”

The photo, which was quickly deleted by Instagram, created a stir online, and that’s exactly what Rose was hoping for.

“People are very uncomfortable with the female body,” she told the website. “It’s OK to leak images onto the internet, and people are like, ‘Yeah, that’s so cool.’ But if you actually do it yourself and in a way that’s owning your own sexuality, it’s almost taboo.”

In addition to preaching sex positivity, the post was meant to promote her annual Slutwalk, which will be held in early October.

“I go far and beyond to piss people off on purpose,” she said. “That’s what I do to bring awareness to Slutwalk and what’s going on. The fact that there are double standards, that women are not allowed to own their sexuality and their bodies. We can’t possibly be sexually confident, because then we’re whores. We’re not allowed to have a past. We’re incapable of love if we’re too beautiful or if we’re too successful. It’s all really, really f–ked up.”

While Rose was applauded for the picture by a large number of her fans, she also received criticism for it from others, including Piers Morgan. But it sounds like the model couldn’t care less about his objections to the photo.

“I wanted to prove a point, and of course arguing with Piers Morgan, who is such a d—k … That’s why I kept going back and forth with him. I posted a picture of Adam Levine with a woman grabbing his d–k and balls, and Piers was like, ‘You know that’s different because that was for testicular cancer’ — so that’s okay. Men feel like they can do whatever, and show their bodies off constantly, but we can’t — that’s bulls–t.”