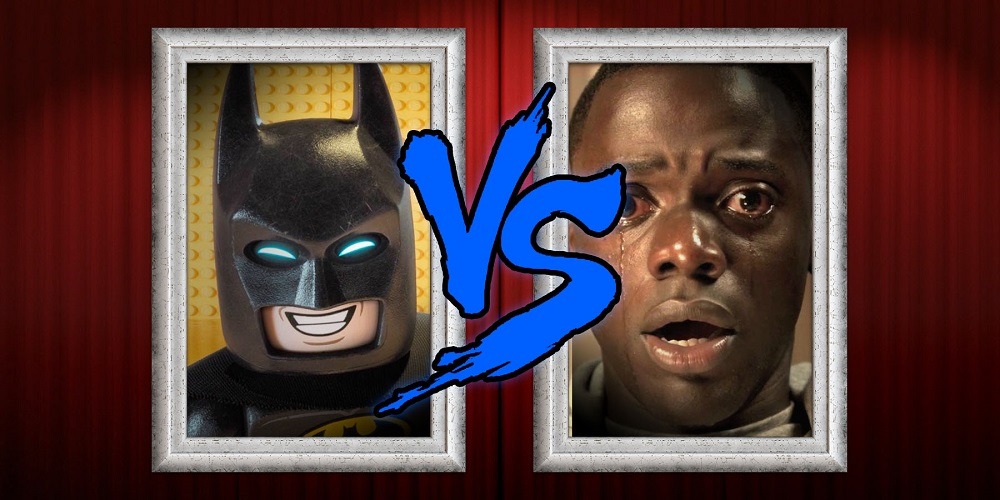 Jordan Peel’s wonderfully creepy and eery African-American nightmare film “Get Out” roared over “The Lego Batman Movie” to take the top spot at the weekend box office.

The Blumhouse-produced and Universal Pictures distributed film was shot on an indie horror film budget of $4.5 million and raked in over $30 million. So, even with a $20 million studio marketing budget, it’ll be in the black very soon, if not already. While it was expected to perform well against its budget, few people foresaw a debut this big – especially with a relatively unknown star in Daniel Kaluuya leading the film.

Great reviews and buzz propelled comedian Jordan Peele‘s directorial debut, the micro-budget thriller “Get Out,” to a chart-topping opening weekend with $30.5 million according to studio estimates Sunday.

The film is a true classic piece of old-style filmmaking with dramatic pacing and suspense that allows the film to breathe and truly get under your skin. The story is of a twentysomething black photographer going upstate to visit his white girlfriends (Allison Williams) parents and then realizing too late that he’s entered a slowly unfolding world of racial terror. The best praise we could give Peele is that his pacing and tension will remind some of Roman Polanski’s world of paranoia in films like “Rosemary’s Baby,” “The Tenant” and “Repulsion.”

The beauty of “Get Out” is that it takes glee in also being at his core a primal racial satire which only enhances the scares and tension throughout the film.

Part of the reason is positive reviews. “Get Out” has a 100 percent rating on Rotten Tomatoes, which is extremely rare for a thriller and only added to the excitement going into the weekend according to Universal’s President of Domestic Theatrical Distribution Nick Carpou.

“Jordan Peele is an absolute talent,” he said. “As we got closer and closer to opening, it’s amazing how many people were rooting for it.”

Peele, who most audiences know for his sketch comedy work on the series “Key & Peele,” wrote and directed the film about a black man who travels upstate to meet his white girlfriend’s family.

Even without Peele in the film, audiences turned out in droves to experience the high concept horror pic. According to exit polls, African Americans comprised an estimated 39 percent of the opening weekend audiences, while Caucasians made up 36 percent, and a whopping 49 percent were under the age of 25.

“Social media is going to keep this movie front and center,” Dergarabedian said.

“Get Out” effectively pushed “The Lego Batman Movie” into second place. The animated family picture added $19 million this weekend and is now up to $133 million after only three weeks in theaters.