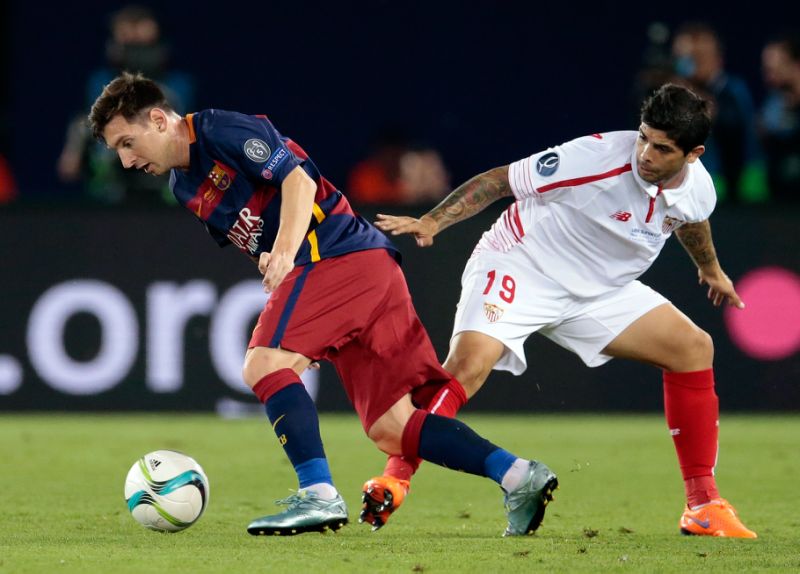 Sevilla are on course to win three in a row

Sevilla have almost become synonymous with brilliant performances in the Europa League. The Spanish outfit were handed a tough quarter-final draw against fellow Spaniards Athletic Bilbao and took on the league rivals on Thursday in the first leg of their tie.

Curiously, they remain the only team in the top four European leagues to have not registered a single league game away from home this season. But then the Europa League is not La Liga. Unai Emery’s men went behind an Aduriz ZUbledia goal in the 48th minute, but showed their title credentials as they went on to score two second-half goals and take home a crucial 2-1 away win. It will be hard to stop them from winning their third straight Europa League.

Valencia ended that on Sunday when they beat Sevilla 2-1.

During the group games of the Europa League, Liverpool were under the management of Brendan Rodgers. They had Swiss side Sion, French club Bordeaux and Russia outfit Rubin Kazan in their group – seemingly easy group. But they struggled to get going and drew their first three games 1-1. They managed to top the group despite winning just two games out of six.

If someone saw them in those early days, slept, and then woke up to watch the Reds at the Westfallenstadion on Thursday night, it would have been hard for him to say those two teams were the same. Klopp’s work has definitely begun to take shape and if nothing then the clear way of Klopp’s style was on display in Germany as his side took home a credible 1-1 draw against Borussia Dortmund.

The Yellow Submarine have pretty much gone under the radar for those not too familiar with the happenings in the Spanish league. With just seven more league games to go in the Spanish league, Villarreal comfortably sit fourth in the standings, eight points clear of fifth-placed Celta Vigo, meaning Marcelino Garcia Toral’s side have all but sealed their spot in the Champions League next season.

They remarkably held Barcelona to a 2-2 draw in the league recently and have generally looked a very exciting and solid side. They won 2-1 at home against Sporting Prague on Thursday and looked good to score plenty more. There are likely to be two Spanish representatives in the Europa League last four this season, and perhaps also in the final.

Shakhtar Donetsk are the torch-bearers of Eastern European football

The Ukrainian giants registered a 2-1 win away to Portuguese side Braga on Thursday and are on course to book their place in the last four. They stumbled out of the group stage of the Champions League to land in the second tier of European competition earlier in the season.

Last term another Ukrainian side Dnipro Dnipropetrovsk made it to the final of the Europa League and it wouldn’t be a surprise if Shakhtar keep flying the Ukrainian flag all the way to St. Jakob-Park on 18th May.