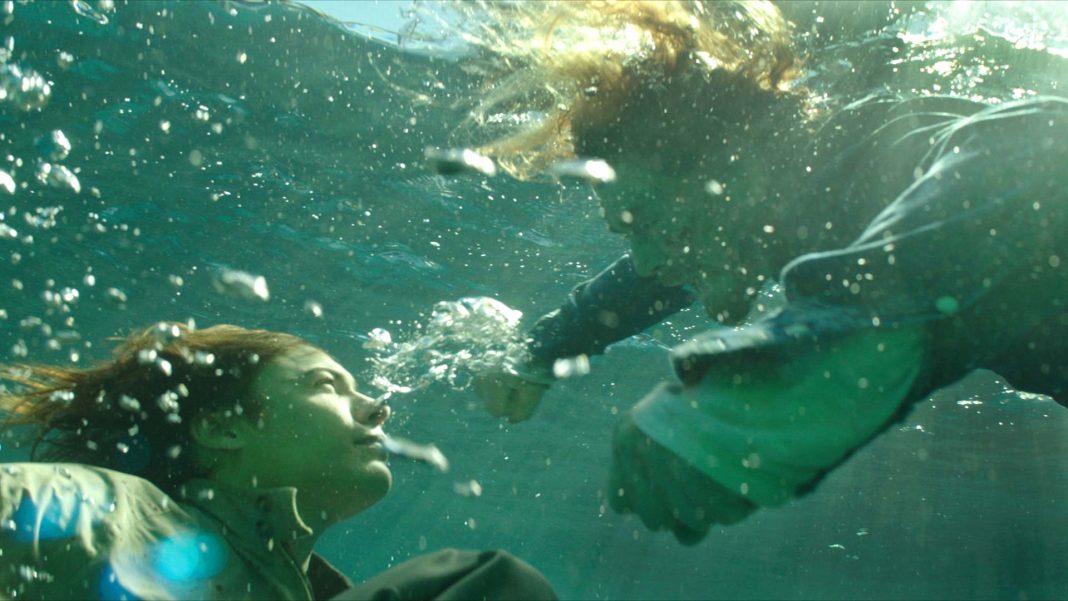 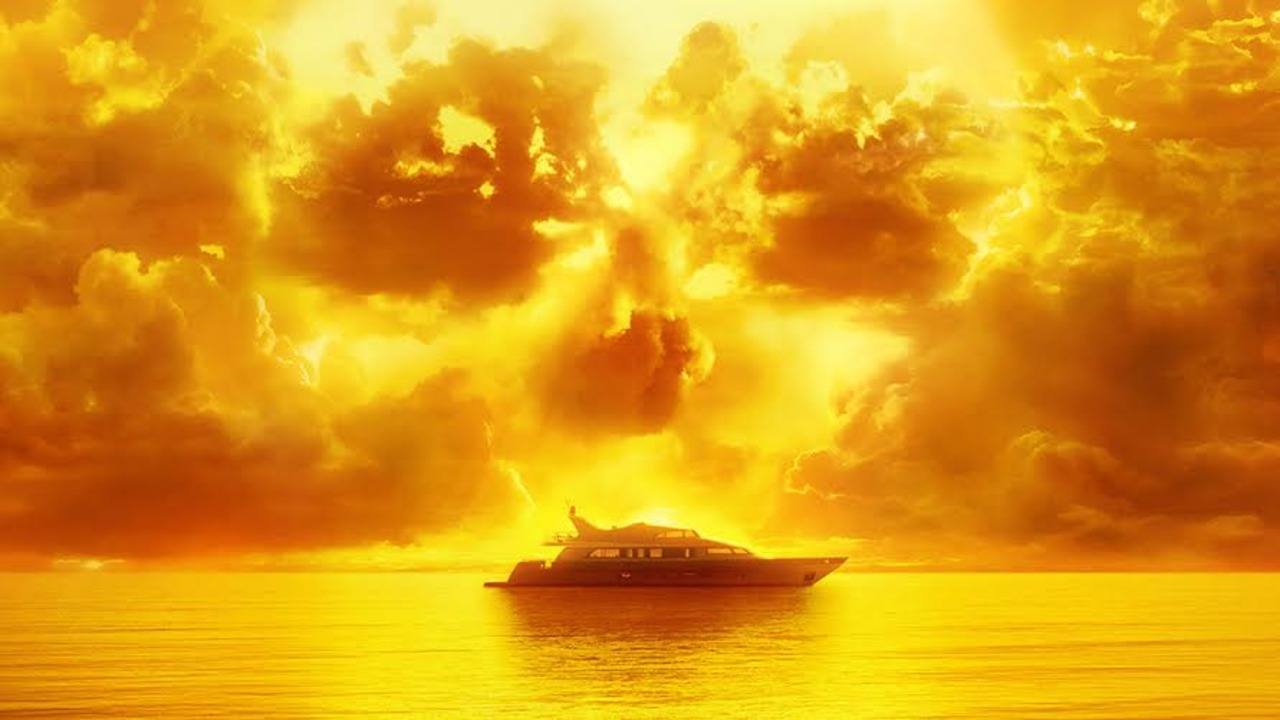 When we last saw our band of survivors from season one of Fear The Walking Dead, they were seeking refuge on Victor Strand’s yacht Abigail. And Travis had to do the first mercy killing, popping his ex-wife in the head after she had suffered a nasty zombie bite.

With the world collapsing around them in the opening of season two, part of the group makes it onto the ship. Nick, the addict, takes the dingy back to pick up the rest of the crew and on the way out to Abigail, he kills a zombie in gruesome fashion with the propeller.

That Nick is a motor-boating son-of-a-bitch!

The military is still trying to fix the virus. Their solution? Blow up the city.

Strand’s plan is to sail to San Diego and says his ship can make it 3000 miles if need be. The Abigail is an awesome vessel, and this would be a cool place to hang out for a few weeks…except for the possibility of zombie pirates.

It’s clear that Strand is not taking any chances as he laughs at Maggie’s suggestion to stop to help a boat load of survivors. 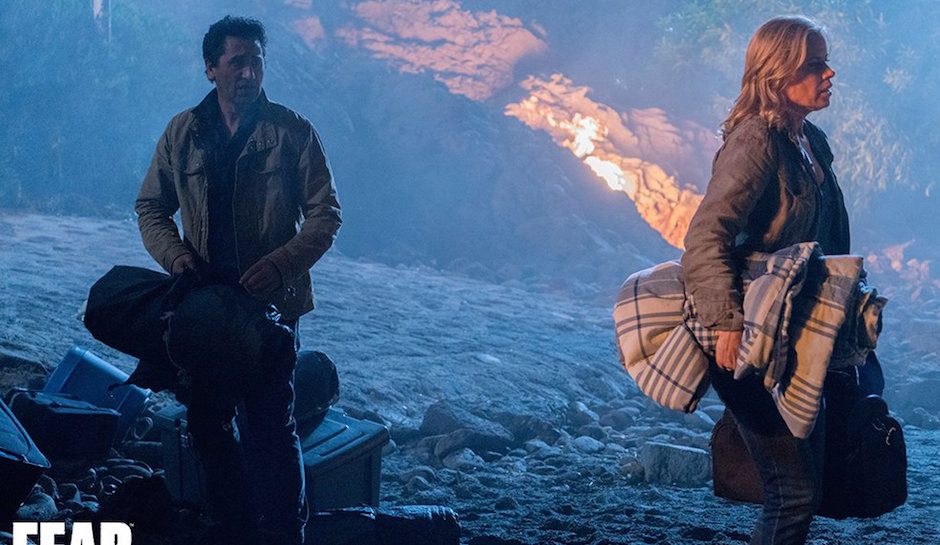 While the captain refuses to sleep, Alicia is chatting on the CB radio to a guy that says they are hold up nearby on land. She’s careful at first but ends up divulging a lot of info that she should not. Plenty of people would love to rip their boat and stick the group on that little dingy.

I do like the setting for this season. Out on the ocean with the sun shining is unlike anything we’ve seen on The Walking Dead. It gives off a feel of a nice world, but clearly that’s just an illusion. It’s just another environment to fend off the Walkers.

While it seems implausible that Strand would be up to no good, Daniel Salazar doesn’t trust him at all. Strand may have needed these people to run the boat effectively or just figured there was strength in numbers. The fact is he gave these people a chance by letting them come on board his ship, though.

We’ve all heard of funerals getting off track. A drunk relative or a preacher without a clue can make them really uncomfortable. Chris wrecked his mom’s burial at sea as he abruptly flipped her body into the drink before anyone knew what happened. The kid is still pissed at Travis for killing his mom and thinks there had to be another option.

We know better, but at the beginning of this outbreak, his logic would seem sound.

Alicia gets pulled in deeper by Jack on the radio and is desperate to help her chat pal. But Strand’s Oceanic Rules 1-3 will not allow for such stupidity. Lucky for the group he is a hard-ass

Near the end of the episode, it looks like the newly formed family will be enjoying a nice traditional eel dinner. There even seems to be plenty of booze to go around, making this situation a bit more tolerable.

Then chaos ensues as Chris decides to just jump in the ocean. The kid is upset, but putting everyone else in danger is pretty damn stupid, and I’d imagine Stand has a rule for anyone who willing disembarks from his boat.

Nick isn’t going to let the guy drown, so he goes in after him, but Chris says he is just taking a swim so Nick decides to take a stroll under the sea as well. Awesome idea…until he comes face to face with an infected floater.

There are many more undead floaters from the wreckage of a ship that got shot to pieces and half sunk. Nick goes to investigate in a reckless manner, or fearless as Strand called him. This risky behavior always puts the group in danger just like in the original TWD series. But dumb moves serve to propel the story along of course. 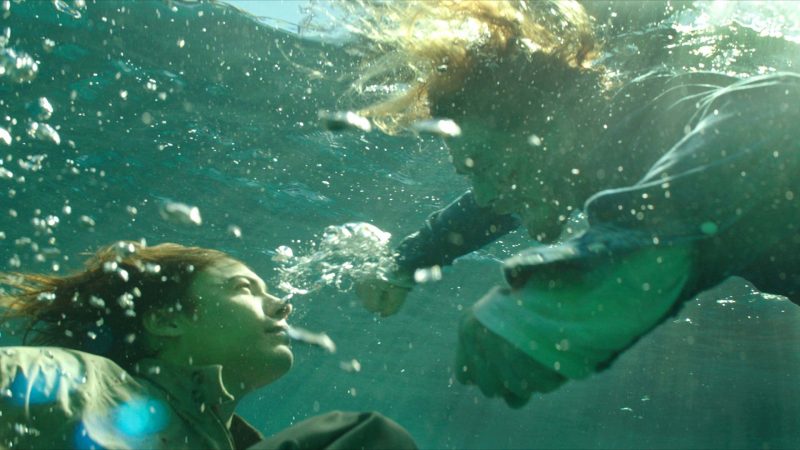 No way I’m swimming over to a smoking ship with monsters all around in the water. Sharks are threat enough for me to stay on the yacht.

We’ll see what information is in the ship log that Nick brought up from the destroyed vessel. It should give a clue as to who attacked them at the very least. Or it’s possible that Stand and company will meet the killers face to face as Jack told Alicia “See ya soon.”

Nice opening episode that seems a little anticlimactic compared to what we saw last week on the original series with Negan. But we have to keep these two shows separate of course.

The conflict between Strand and the rest of the crew is going to grow each week clearly. It’s his boat, but he’s the only one without any family members to back him up. We could see a mutiny sooner rather than later.