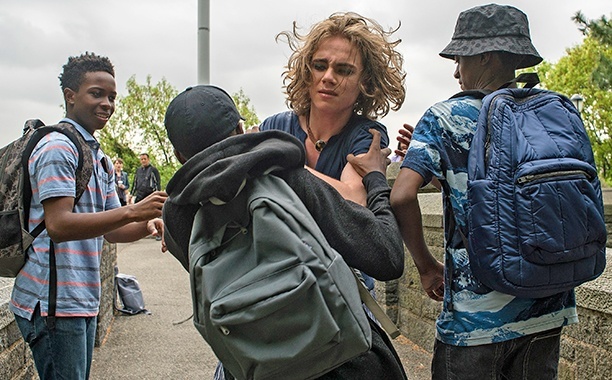 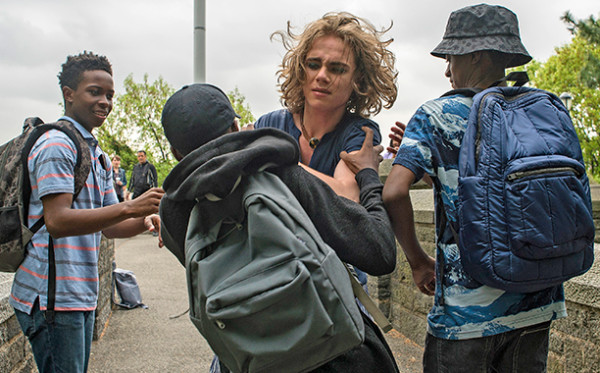 As usual “Law & Order SVU,” hits us with a very topical storyline and starts off with three teenage boys seeing a boy their age named Avery in a dress. They ran over to the boy and bullied him. They took his camera from him and one of the boys threw the transgender boy over a bridge onto the concrete below.

Benson and Sonny went to Avery’s hospital room to find out what happened. Avery said they grabbed his skirt and bag and when the boys grabbed him he tripped over his high heels and fell. His father said this had happened before and local police hadn’t done enough to stop it. They viewed cell phone videos of the incident. Benson and Sonny showed one of the videos to the principal of the school where the incident happened. He then went and got Kian and Marcus, students involved in the incident. Darius, another boy at the scene, was taken in by Finn and Rollins. At the precinct Sonny talked to one of the boys and his mother. Marcus was accused of pushing Avery over the wall but he said Darius was the one who did it. Darius’s mother was called to the station and he was detained. His mother defended him and Benson said she was only there so they could read Darius his rights.

Darius said that he was just talking to Avery, but admitted it was his idea to push the boy away. He said he didn’t mean for him to fall over the bridge.  Avery came to the police station and Darius’s mother apologized to Avery on Darius’s behalf. Sonny asked Rollins what made a boy decide to be a girl. Rollins said sexuality and gender identity are two different things.

Marcus was taken into family court to testify. Kian was called in also. Marcus and Kian got probation for their part in the incident. Darius said he was afraid of Avery and that’s why he pushed him away. Darius’s mother fought to keep him out of jail and Finn said he would do what he could. Darius then gave Finn a letter to give Avery. The letter admitted that Darius was guilty of hurting Avery. The letter said if Darius could get a do over he wouldn’t do it.

Avery had an embolism as a result of the fall and she passed away. It was determined that Darius would be tried as an adult in the death of Avery. Rollins told Darius’s mother that what he did was considered a hate crime.

At Avery’s funeral, her therapist spoke about the people Avery had told her were important to her. She said Avery was inspired by the passion of those around her to accept her for who she was. Avery’s mother told Benson Avery would not have wanted Darius to be tried as an adult for her death. Sonny told the new District Attorney that Avery’s family thought the law was being too hard on Darius.

In court, Sonny testified Avery felt targeted and that she had done nothing to provoke the boys bullying her. Darius’s teacher said Darius was protective of other students who were bullied because he had a little sister. She said Darius had a good heart but may have been confused by a transgendered classmate. His doctor said Darius’s impulse control wasn’t fully evolved and is very active in 15 year old, Darius’s current age. He also said Darius had had very little exposure to anyone transgendered. The doctor said Darius should not be charged as an adult and that he wasn’t discriminating against transgendered people by bullying Avery. Darius said he felt sick to his stomach when he saw Avery fall off the bridge. He said he didn’t want Avery to die and didn’t hate her. He also said he would never forgive himself for her death. Darius said he wanted to talk to and tease Avery. He said Avery told him to leave her alone but he chose to grab her instead. Darius said Avery fell on him and he reacted by pushing her away.

Avery’s dad testified that Darius had given Avery his apology letter with a drawing in it in the style of graphic novels, which Avery loved. He told the judge he and his wife wanted Avery’s death to mean something but wanted to make sure Darius’s family wouldn’t have to deal with the tragedy of having him taken away from them and put in prison. The judge told Darius she was moved by testifying witnesses but that Darius was guilty of second degree manslaughter and a hate crime. He was remanded to a center until he was 18 and then would be transferred to an adult prison for an additional seven years.