I yearn to travel back to the days of classic film noir, and Kiss Me Kill Me only deepened by melancholy for the quickening death of the genre in modern Hollywood. There recently has been a few great mystery flicks—Paul Thomas Anderson’s Inherent Vice and Shane Black’s The Nice Guys—that do give me some sense of relief, but there’s no denying that the genre is in a severe state of decay. And I was hoping that Kiss Me Kill, which repeatedly takes bits and pieces from a few of its successful predecessors, was going to be more than just garden-variety entertainment. 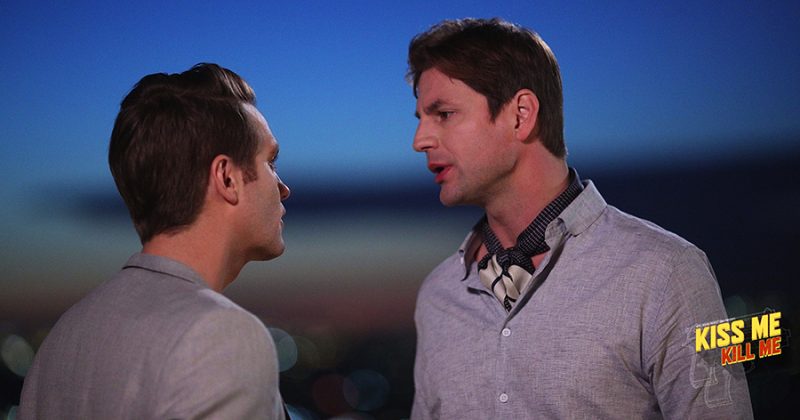 We meet the largely chemistry-less couple of Dusty (Van Hansis) and Stephen (Gale Harold), who are having some relationship troubles. Dusty is aware his partner his cheating on him, and he also knows who with. He confronts his beloved Stephen but then suddenly blacks-out. Upon awakening, Dusty discovers that his boyfriend has been murdered. And guess who’s the main suspect? You got it. The story unravels from there — and largely in an underwhelming fashion. While you do get a couple twists and turns every now and again, I just couldn’t seem to get invested in anything of them. The film rarely uses any of the genre’s signature recipes, which creates a generally derivative and stale viewing.

As is the custom with film noir, there’s usually a femme fatale of some sort. Think of the genre’s archetypes like Double Indemnity, The Postman Always Rings Twice, Fargo, and, why not, Martin Scorsese’s Shutter Island; some of what makes those films as compelling as they are is how their darkly fascinating mysteries play as backdrops for the antihero’s journey. In Kiss Me Kill Me, however, there’s no real sense of either. I found myself losing interest not only in Dusty’s journey but also where the story would end up. I’m not saying that it played as some horrifically bad mess, it just felt like it had nothing new or interesting to offer me.

Another (usual) component in making a good film noir movie is the score. Because the majority of scenes take place at night, a few eerie tunes can go a long way. What I was disappointed — and, honestly, quite perplexed — with was the overwhelming presence and genericness of Kiss Me Kill Me’s music. It blends snazzy saxophones with wannabe enigmatic piano notes, all of which are played time and time again. I don’t want to come across as too nit-picky, but there were a couple moments where it sounded like the score from the original Planet of the Apes. You know those rumbling piano pieces from that film? Well, Kiss Me Kill Me uses that style of score to its utmost detriment. When it seems like we’re supposed to take the film seriously, the score tells us that this is nothing more than just goofy entertainment.

First and foremost, I’m the type of viewer that gets more invested in the characters than anything else, so film noir often rings true to me. But since the performances in Kiss Me Kill Me are only passable enough to keep yourself from nodding off, it made it pretty hard for me to truly sympathize with any of the characters. I didn’t mind that their arcs were quite simple, but I did take issue with how boringly laid out everything else was. It’s bittersweet to see a troubled hero get arrested, killed or betrayed at the end of the story. And Kiss Me Kill Me tries to inject some tragedy, but it ends up falling pretty flat. I was left with nothing to think about after the screening, nor did I get any sense as to why I should.

Like the also dying Western genre, I want film noir to have a resurgence. It may take some doing, but it can definitely happen. Many of the aforementioned ones show how there are at least a few filmmakers out there who still want to keep the femme fatale soirée going. Sadly, Kiss Me Kill Me only dug the genre’s grave a bit deeper.

Film Review: ‘Kiss Me, Kill Me;