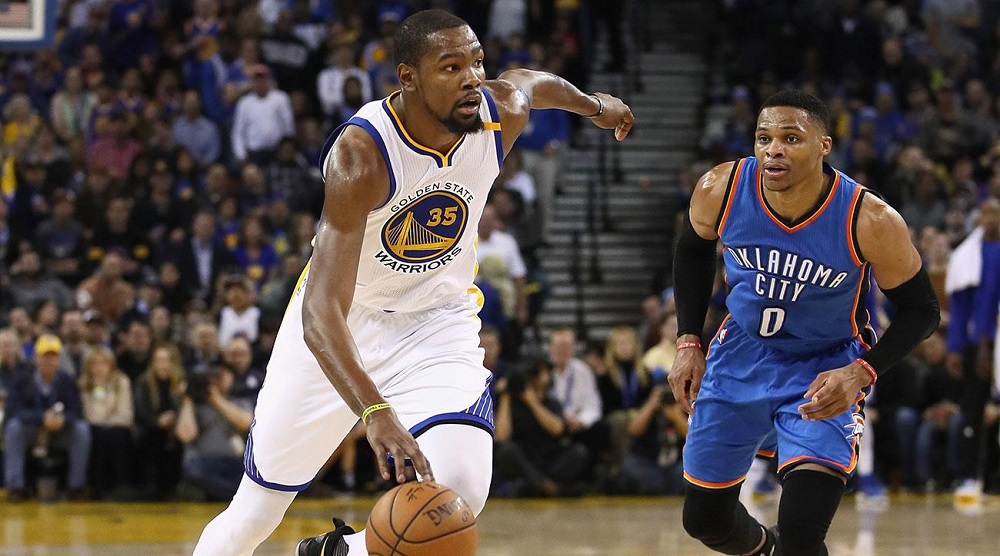 When Kevin Durant left the Oklahoma City Thunder to join the Golden State Warriors, he didn’t exactly leave on the best terms.

OKC fans weren’t happy. Why would they be? After coming within one game of another NBA Finals trip, Durant jumped shipped to join the team that beat him. He wanted that guaranteed, fast, easy ring, and he got it. He was tired of trying to develop a budding OKC team that he had been with since his rookie year.

Loyalty clearly isn’t Durant’s thing. But, according to Durant, no one in the NBA is loyal—it’s all a facade.

“Ain’t no such thing,” said Durant when asked what loyalty in the NBA meant to him. “You see disloyalty in different ways, but that’s one of the most underrated parts of the game. We scream loyalty, but we don’t expect it from the people writing the checks because they’re writing the checks. [They say,] ‘You should be fine with it because you’re getting paid.’ I liked it better when I was naive about the NBA business, how f—ed up it is. That was better for me that way…You put money and business into something that’s pure; it’s going to f— it up.”

That being said, you know who Durant still expects loyalty from? The Thunder organization. And when they gave away his No. 35 jersey to undrafted rookie P.J. Dozier because he asked for it, Durant was pissed.

“I didn’t have that perspective at first. I didn’t have it when I went back to OKC. I was like, ‘F— all of them,'” said Durant. “I didn’t have it when they gave my number away. I was, ‘F— all of them.’ My best friend works for the team, I told him, ‘F— all y’all. That’s f—ed up.’ Then I had to get out of my head, tell myself, ‘It’s not that serious, it is what it is.’ I understand it’s not my number anymore, they can do whatever they want with it, but you hand that number to a two-way player, you’ve got to be, like, ‘Nah, we’ve got too many good memories with this number, man.’ But at some point, that thing’s going to be in the rafters anyway; it’s all good. I did something they didn’t like. They did something I didn’t like. S— happens.”

If Durant doesn’t make a LeBron James style return to the Thunder, why should they retire his jersey? He basically brought the team 80 percent of the way to an NBA championship and then left to join a group that was already 100 percent there.

This “perspective” Durant has now is that OKC secretly loves him and he returns that love. Seems unlikely.

“I am OKC. I’m still OKC,” said Durant. “That blue is going to be in my blood forever. That place raised me. I have people there who would take a bullet for me and vice versa. But there’s a point in a young man’s life, just like when he goes off to college, or when he moves to another city, to get a job, he’s got to make a decision for himself. You’ve got to make a decision that’s best for yourself, and you would expect the people that love you the most to say they understand.”

The Cleveland Cavaliers still remained quietly faithful to LeBron when he left because they felt he had a unique connection to them having grown up in the city.

Additionally, the Cavs never could quite figure it out without James. Even three first overall picks couldn’t help lift the Cavs back into relevance. They needed LeBron.

The Thunder would love to have Durant back. That would be a massive boost to the squad. But they don’t necessarily need him right now. After going out in the offseason and bringing in massive talents like Paul George and Carmelo Anthony (something which the Cavs were never able to do without LeBron in town), the Thunder are right back on top of the Western Conference. Well, they certainly aren’t the toast of the conference with the Golden State Warriors still lurking around there, but they’re at least back in relevance.

If Durant were to choose to fly back to Oklahoma City after he wins a couple of rings with the Warriors, I’m sure they’d love to have him back. I’m not so sure that it would be like LeBron’s return, however. The fanbase would most likely be split, half of them believers in the return of Durant and the other half still holding onto the pain he caused from his original departure.

But hey, if he returns and wins a championship, kind of like LeBron, then everything will be more than fine in Oklahoma.