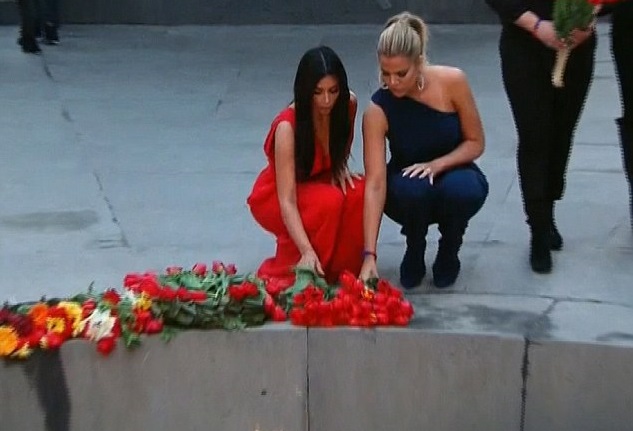 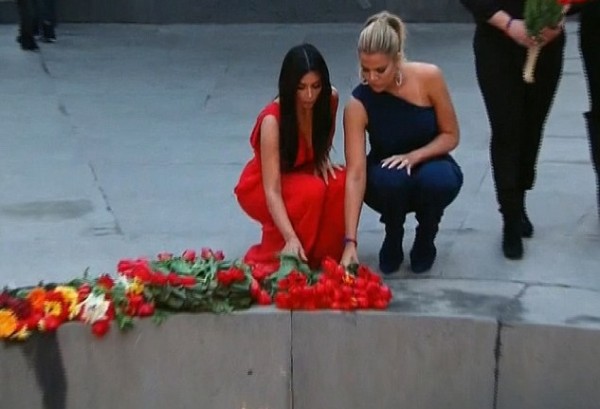 The fall return of Keeping up with the Kardashians is here. This week, season 10 episode 14 “Mother Armenia” was all about Kim and Khloe’s trip to Armenia to find more about their family’s heritage.

The episode begins with Kim and Khloe packing up as they venture to Armenia. Both of them are excited as they reveal their late father Robert Kardashian Sr. always wanted to take his family there one day. Therefore, they both decide it is finally time to visit where their family was from.

When they arrived in Armenia, the crowds of screaming fans shocked them. Although they were prepared for some notoriety, the sisters were amazed by the enthusiastic reception they received. Khloe noted that Kim especially was treated like, “an Armenian princess.” Going on to say that if Kim ever “lost some fame back home all she would have to do is move to Armenia and she would be set for life.”

While Kim and Khloe have some one-on-one time together, Kim decides to let the cat out of the bag and reveals that she is officially pregnant with her second child.

Meanwhile back in California, Kourtney expresses concern over her little sister Kylie. Kourtney says that Kylie hasn’t been communicating much with the rest of the family and she believes it may be partially due to Caitlyn’s transition.

However, Kylie insists that everything is okay and she is simply caught up in her own life.

Nonetheless, Kourtney ends up sending Scott (who at the time was her boyfriend) to track down Kylie and see what’s really going on. He ends up walking in on Kylie having lunch with her friend. However, Kylie is obviously upset with Scott’s impromptu visit and quickly gets him to leave without discussing any of his concerns (aka Kourtney’s concerns).

After the run-in with Scott, Kylie decides she will open up to Kourtney, as she just wants to get her family off her back. Kylie heads over to her sister’s house and reveals why she has been so secretive lately. Kylie tells Kourtney that she has been spending a lot of time with Caitlyn and she feels that being secretive about it is her way of protecting her mom (who is clearly still struggling with the whole situation). Kourtney realizes that she totally judged the situation wrong and it is not Kylie who is having a hard time with the Caitlyn situation, it is her mother Kris.

Today marks the 100 year anniversary of Armenian Genocide! I am proud to now say I have been to Armenia. I have seen the memorials and the people who survived and I am so proud of how strong the Armenian people are! I am saddened that still 100 years later not everyone has recognized that 1.5 million people were murdered. But proud of the fact that I see change and am happy many people have started to recognize this genocide! We won't give up, we will be recognized by all soon! #NeverForget #ProudArmenian ♦️🔷🔶

Surprisingly, Kanye even had his own scene in the season premiere. The usually private rapper was shown touring an Armenian school, where he interacted to students in both the robotics and music program. He took the opportunity to share one of his Kanye conspiracies and warns them that 3D printers will ruin textiles like “the Internet ruined music.”

The end of the episode featured mom Kris Jenner being a lot more vulnerable about how she is truly feeling relative to when she appeared on I Am Cait. While face-timing Kim, Kris breaks down crying, as she is visibly still emotional and fragile from Caitlyn’s decision to transition after their long marriage. Fortunately, Kim is able to turn Kris’ mood around as she reveals that she is officially pregnant once again.

Check out next week’s episode of Keeping Up with the Kardashians on E! Network, Sundays at 8pm.

Kim and Kanye’s daughter North West gets baptized in Jerusalem. The sisters get upset over Caitlyn Jenner’s Vanity Fair article. There is trouble in paradise for Scott and Kourtney, as he is photographed getting close to his ex-girlfriend.