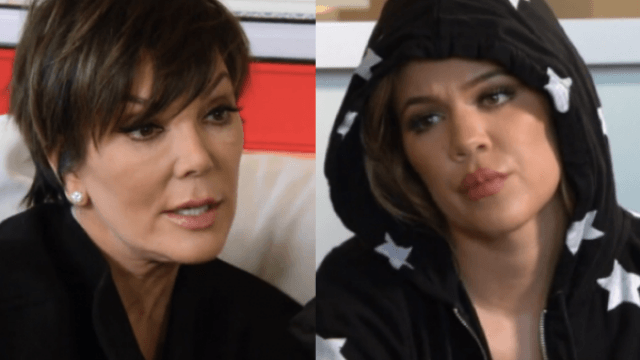 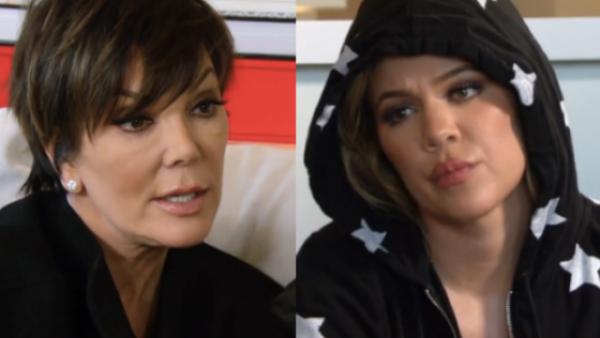 While the last few episodes of Keeping Up With The Kardashians has been focused on Kourtney’s struggle and relationship drama with ex Scott Disick, tonight’s episode “Fear of the Unknown” showcased her in a completely different light. In addition, Kris tries to pressure her kids into getting a DNA test that would determine whether they have any signs of developing cancer – which has been in their family for over three generations.

After Kim and Kourtney criticize Kris’ home décor right in front of her, Kris decides to change the subject and tells them about the DNA test she has been looking into. Kris goes on to explain that her mother MJ – who beat breast cancer – advised her to get it and she would like everyone in the family to do the same. Both Kim and Kourtney agree to get the blood test done the next day when the whole family is going to be together for a photo shoot.

The next day, the girls are all seen in a gothic themed shoot (which was apparently all Kim’s idea). Here, all of the sisters get their blood drawn from the company that administers the genetic test. However, when Kris approaches Khloe about the test, she is shocked to hear her decline. Khloe claims she “doesn’t have time” to get the blood test, even though she is just sitting around getting her hair and make up done. In confessional, Kris admits that she thinks the reason Khloe is so hesitant towards getting the test done is because she has already had skin cancer and this was obviously very scary for her – thus a test to see what her risk is for other cancers is undoubtedly intimidating.

Later on, Kendall and Kylie are seen hanging out at their father’s house. Here, Kylie convinces her dad to hook her up with some of the gas she has stored at her house, as her Rolls Royce is “running on E.”  During this, Kendall asks Caitlyn if she could use one of her off-road vehicles, but is disappointed to hear that none of them are working. In confessional, Kendall explains that she misses the more tomboy-ish things she used to do with Caitlyn, and she feels that Kylie is able to bond a lot more with Caitlyn, as she is more into girly things like makeup and fashion. At the same time, Kylie admits in confessional that she feels a lot more connected with her father, as he is often interested in doing things like getting a spray tan or trying on new make up with her.

After finishing up the gothic family photo shoot, Kourtney went to yet another shoot she was asked to do for an art gallery. Here, Kourtney was photographed completely nude, showing off her revenge body that she has been working on nearly every day since her and Scott split. Shortly after, Kourtney shows off some of the images to her sister Kim. In confessional, Kim gushes about how the “old Kourtney” is back and that she is a much happier person now that she isn’t carrying the weight of another person (aka Scott).

Meanwhile, Kris is seen hanging out at Khloe’s house. As a mother, Kris can’t help but bring up the fact that Khloe refused to take the test. Kris exclaims that she is going to die at 30 if she doesn’t take the proper precautions, but Khloe remains adamant that she does not want to get the test done. Not too long after this, Kim calls up Khloe to also nag her about the test. Kim pulls the “grandma card” and explains that MJ (their grandma/Kris’s mom) really wants Khloe to get it. However, Khloe states that she does not want to be weighed down by knowing whether or not she has certain precursors to cancer.

Fortunately, the “grandma card” ends up working and Khloe finally gives in and gets the test. Khloe confesses that she is getting it for MJ, as she doesn’t want her to have to worry.

Later on, Kris and her boyfriend Corey road trip down to San Diego, where they are going to get the test results and see MJ. At the same time, Kim and Khloe are also road tripping there, along with Kim’s daughter North and Kourtney’s two kids Penelope and Mason (as Kourtney is in Montana taking a “mommy break”). Khloe basically sums up their car ride saying, “Being in the car with three toddlers is the best form of birth control that anyone could ever have.”

Corey, Kris, Kim and Khloe finally arrive at the health center in San Diego. Here, they meet doctor and family friend Paul Nassif (former husband of Real Housewives of Beverly Hills star Adrienne Maloof), who goes over their results. Fortunately, Paul reveals that they all tested as negative for the gene that indicates the highest likelihood of developing cancer (between 40-80%).

Towards the end of the episode, Caitlyn pays a visit to Kendall’s condo after she receives a phone call from Kylie, who explains that Kendall has been upset with Caitlyn’s lack of interest in the more boyish activities they used to do. Caitlyn apologizes to Kendall for being so busy and reveals that she just purchased an even more powerful off-road vehicle for them to play around on. Caitlyn then advises Kendall to always come to her directly when she is feeling distant or upset about the situation. After their talk, the two have some fun on a pair of hover boards that Kendall had in her condo.

The big dramatic moment of this week’s episode comes when Khloe calls Kim (who is at Kris’s house with Kylie) hysterical. Khloe proceeds to connect an incredibly emotional Scott into the call. Scott repeatedly proclaims he “can’t do this anymore,” while Khloe and Kim try to calm him down. Unfortunately, Scott is in New York, but Kris is able to contact his friend Chris who is with him and able to supervise him a bit. Later on, Kris contacts Chris about Scott and Chris states that he has never seen Scott this emotionally upset and out of it.

You can catch an all-new episode of Keeping Up With The Kardashians next Sunday, January 24 on E!

Kris decides to put the family through Communication Therapy while Scott continues to struggle with his reckless ways. Meanwhile, Kylie looks forward to moving into her own place, and Khloe tries to finish her book.