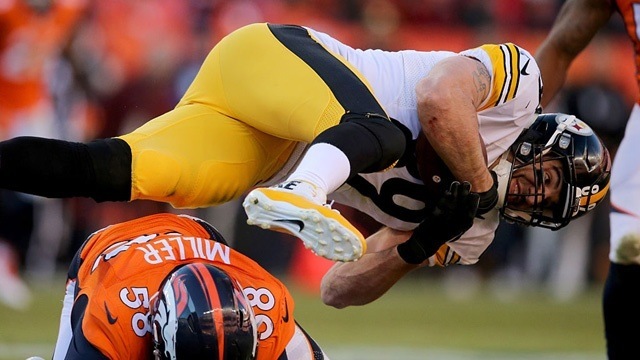 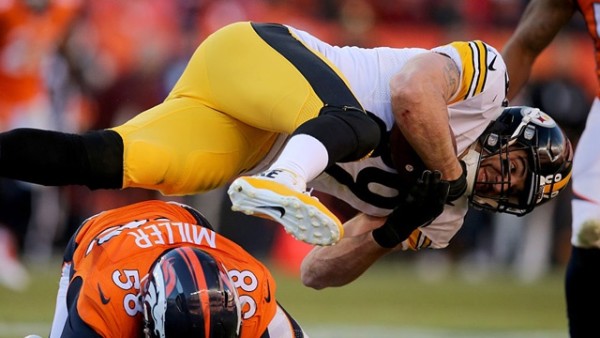 Perhaps fate wanted to see one more Brady v Manning game. Or maybe Vontaze Burfict was the MVP of a game in which he wasn’t involved. Whatever the case, Denver took care of business at home on a windy day that saw the defense carry the day for the Broncos against a Steelers offense that was still dangerous even without Antonio Brown.

This game was not a glamorous offensive showcase. It was a bit mundane to be honest. Pittsburgh was unable to get going with the best receiver in the game in concussion protocol. Meanwhile, Denver was only able to muster two field goals to start the scoring.

Pittsburgh had a chance to go for an early three points but opted to go for a fourth and one by attacking the end zone. Gutsy call, but better execution by the Broncos‘ Aqib Talib who knocked the pass away from Markus Wheaton.

The wind would be a factor all game long for both clubs. Pittsburgh also suffered on punt returns where Antonio Brown was replaced by a very shaky Martavis Bryant fielding punts. Not an easy job if you have never tried it.

The Steelers managed to get on the board and take the lead after a quick 80 yard drive that ended with a Fitzgerald Toussaint touchdown run. 7-6 Steelers with the wind blowing the spider cam sideways.

Peyton Manning‘s passes didn’t resemble perfect spirals most of the day but they were on target despite the wind. It was the receivers who let their aging quarterback down as they accumulated drop after drop.

Pittsburgh increased their lead to 10-6 in the second quarter with a FG, as Big Ben looked just fine after his Paul Pierce impression last week.

The trend in this AFC matchup was punting. CBS even found it necessary to include commentary from former kicker Jay Feely. Not sure what value that had overall, but it did fill time in between the 12 punts we suffered through in the game.

Peyton finally got Denver three more points on a drive that saw Denver convert their only first down to that point. CJ Anderson racked up some important yards on a couple bruising runs on this possession that ended with a FG to get Denver within one at 10-9.

Pittsburgh would answer with a field goal of their own in the third quarter to go up 13-9. Denver was fortunate Martavis Bryant didn’t break a long one to the end zone after getting loose on a couple big plays. He had a 52 yard catch on this drive.

The battle of kickers continued when Denver hit a 41 yarder to make it 13-12.

Pittsburgh wasn’t able to try a field goal as their next offensive march stalled with a facemask penalty. 52 yards in the wind was too risky so we saw yet another punt.

The turning point of the game came with ten minutes left in the fourth. The Steelers’ Toussaint coughed the ball up after getting popped by Bradley Roby. Demarcus Ware would recover at the Denver 35.

The fumble recovery by Denver led to a 65 yard march that ate up nearly seven minutes of clock, resulting in a CJ Anderson touchdown run. Anderson would finish the game with 72 yards on 15 carries.

Demaryius Thomas provided the two point conversion to make it a seven point lead at 20-13. Manning smelling another AFC Conference Title game on the back of his defense.

Big Ben and company had another shot but failed to move the ball and turned the ball back over to Denver on downs after a sack on fourth down.

Denver sealed the win with McManus hitting his fifth field goal of the game to increase the Broncos‘ lead to 23-13. The Steelers did manage to get another field goal of their own just 34 seconds later and would try an onside kick in full desperation mode.

Denver would not allow any further opportunities for Pittsburgh to steal this win as the Broncos secured the onside kick and will move on to host New England next week.

After the game, Peyton gave full credit to his defense which carried the day for his Broncos. He was not giving out cliches. The future hall of famer was totally honest about how his team won the game. The defense will be the only way they can make it past the Patriots next week as well.

Pittsburgh wraps their season up wondering what could have been if their best offensive player, Antonio Brown, wasn’t knocked out with just seconds remaining in their round one game versus Cincinnati.