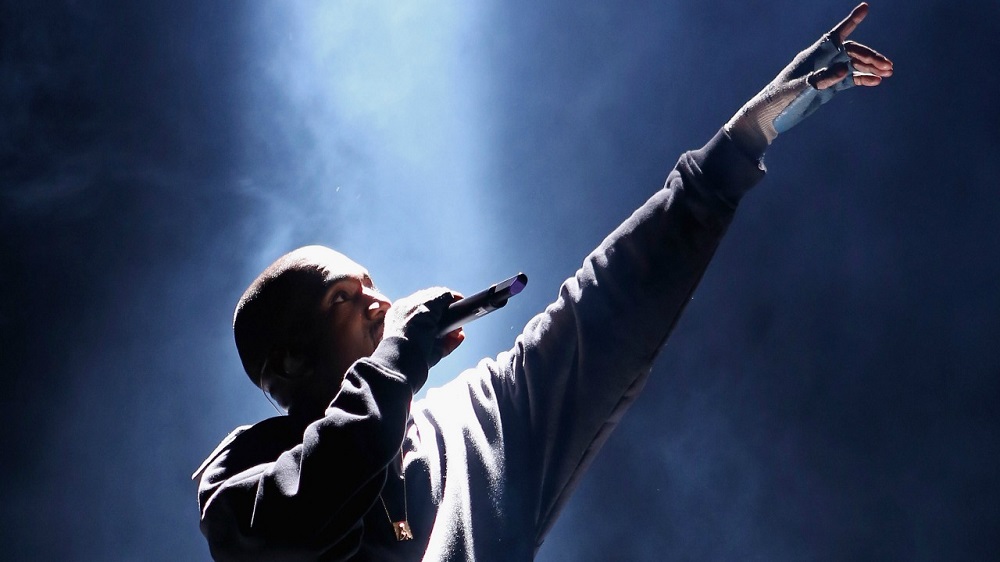 Currently, rapper Kanye West is in the midst of his “Saint Pablo Tour,” a tour devoted to his latest album The Life of Pablo. On Monday, October 17, ‘Ye stopped in Vancouver to perform for fans at Rogers Arena. Fortunately, I was able to get ahold of floor tickets and was able to experience Yeezus in all his glory. While I was expecting to be entertained, I can honestly say that Kanye blew all other artists I have seen live out of the water.

When I first purchased my general admission ticket – which means that there are no seats on the floor and everything is on a first-come-first-serve basis – I was already plotting how my friends and I would squeeze our way to the front of the crowd. However, once Kanye kicked off the “Saint Pablo Tour” it was revealed that he had a very different stage set-up in comparison to your conventional concert. On his current tour, Kanye performs on a floating stage, which hovers a few meters above the crowd. Admittedly, when I first discovered this I was a bit bummed out, as I didn’t think it would be as exciting having my neck strained the whole time while I tried to get a glimpse of Kanye amongst the hundreds of other fans pushing and shoving on the stadium floor – but man was I wrong. 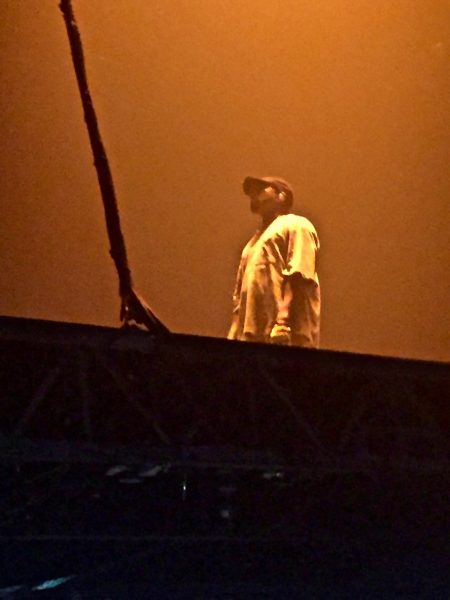 With no opening act of any kind, Kanye entered the stadium shortly after 9:20 pm (despite the tickets saying the show started at 8:00 pm). The crowd had already been chanting “Yeezus” and “Pablo” for a good 5-10 minutes prior to this. The stage maneuvered itself into a ramp, allowing Kanye to get himself positioning on the platform. Subsequently, the stage then slowly made its way (in the air) to the middle of the arena. Based on the pictures of past shows, I thought I would have a hard time getting close to Kanye if I wasn’t willing to do some pretty serious pushing and shoving myself. However, I quickly realized that this was not the case. Since the stage was in a different area during almost every song, it seemed like everyone got a chance to be close to the controversial star. The way the crowd moved with the stage was like a huge hive of bees swarming around Kanye wherever he went.

In terms of visual effects, most of the time Kanye kept it simple. For the most part, he belted out his songs in a very dim light. On occasion, a small spotlight would reveal the “Famous” singer to the crowd. Towards the end of the show there was a notably impactful setup, as a bunch of red light beams shot out from behind Kanye while he sang a couple of his hits. However, even though he kept things straightforward in terms of stage design, he was able to get the whole crowd dancing and singing – even the people way up in the nosebleeds. Say what you want about Kanye, but he truly does have an unparalleled stage presence.

One of the most interesting parts of the concert was the way he took breaks. Often, singers will sneak backstage while their band plays some sort of instrumental, allowing them to catch their breath and at times, do a quick outfit change. However, as we all know by now, Kanye likes to do his own thing. Even though he was on stage for a good 1.5-2 hours, he only took maybe four 3-minute breaks. During these short breathers, he would literally just stand in the middle of his platform staring straight into the audience. It was almost as if he just flicked off his brain and went into hibernation, allowing himself to regenerate and get the energy he needed for his next batch of songs. If anyone else did it, it would honestly just look ridiculous, but when Kanye did it, the crowd just went wild. Somehow it added a more personal feel to his performance, even though he didn’t even say a word and barely flinched during his incredibly brief intermissions. 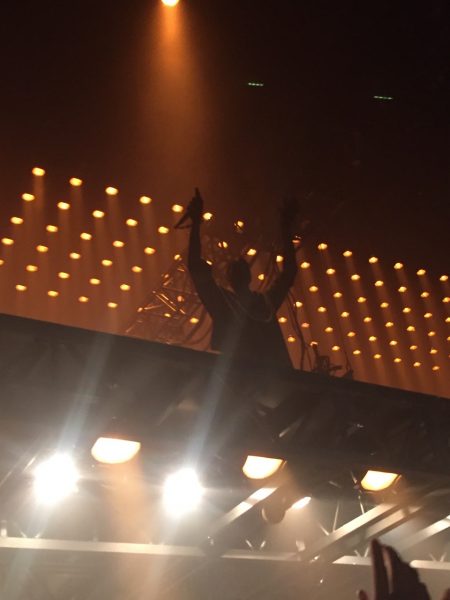 For the most part, Kanye stuck to songs off his Pablo album, however, he did also throw in some of his older hits, including: “Stronger,” “Jesus Walks,” “All of the Lights,” “Power,” and “Heartless.” The one song that definitely got the crowd the most hyped up was “Famous,” as Kanye restarted it 3 different times – clearly capitalizing on all the controversy surrounding it (which, by the way, I did spot a few people jokingly wearing Taylor Swift concert shirts at the show).

The Kanye effect spilled to the outside of the arena as well. Fans started lining up for Yeezus merchandise well before 4 pm. In fact, it is rumored that the artist sold nearly $100,000 worth of shirts, sweaters and other apparel in the first hour or so. At the concert, it seemed like 90% of audience members had some form of Kanye-branded clothing on. 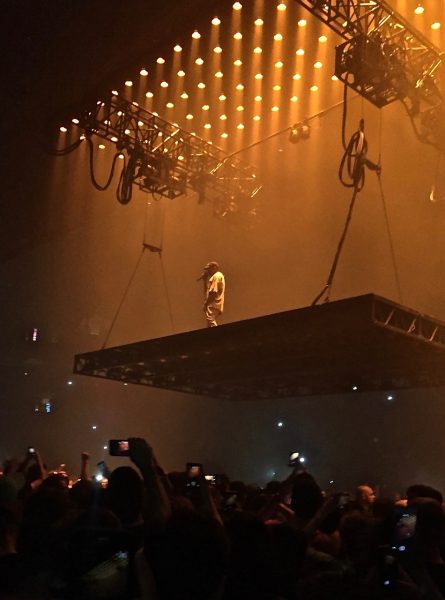 While Kanye has already called out other artists for trying to copy his stage set-up, I would be more than happy to see more musicians adopt the floating stage thing. Although, it will be hard for most performers – who rely on dancers, props, outfit changes, backup singers, etc. to add to their overall performance – as it definitely forces one to rely solely on themselves (due to the inconvenience of floating 15 feet in the air). However, for the ones who can rely on their vocals and stage presence to keep thousands of concertgoers entertained for hours, I hope that Kanye will eventually give them permission to try the hovering stage out for themselves.

Moreover, if you have a chance to catch one of Kanye’s “Saint Pablo Tour” shows, I can’t recommend it enough. It was definitely a night to remember, and I would gladly go to another one of his concerts next time he is in town (which is not too often up here in Vancouver). He may think highly of himself, but after seeing him perform in person, I am tempted to say he deserves to. With his bold personality, undeniable musical talent and inventiveness, Kanye performed a concert that was nothing like any of today’s other popular artists – in the most entertaining and captivating way possible. Without the help of any background dancers, backup vocals or opening acts, Kanye effortlessly kept the whole stadium on their feet throughout his dynamic set. If you can catch one of his “Saint Pablo Tour” shows, do it – I promise you, you will not regret it!