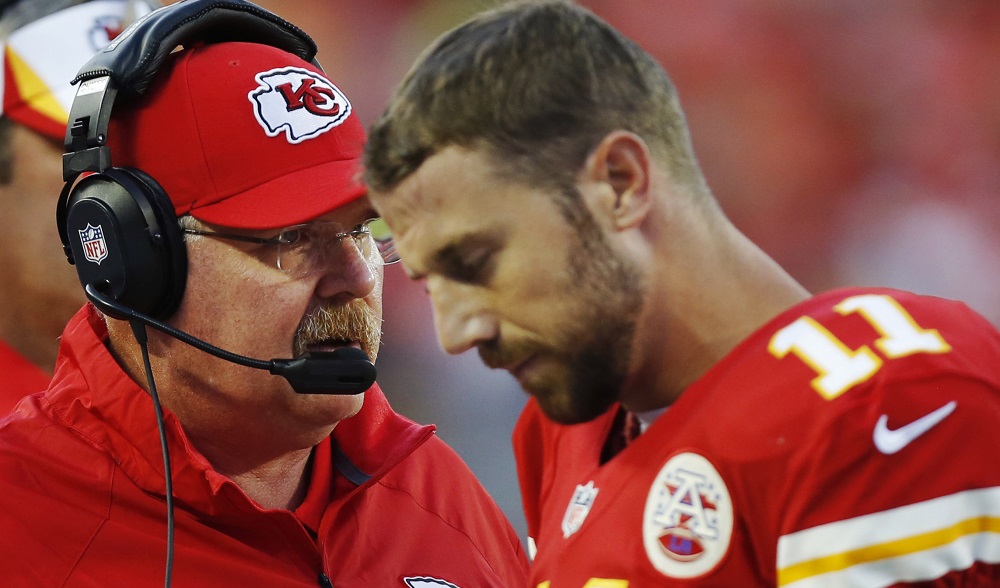 Then, all of a sudden, the Chiefs were good. Like, really good. They destroyed the New England Patriots Week One. Suddenly, Alex Smith was an MVP contender, and the Chiefs were looking like favorites to represent the AFC in Super Bowl LII. The Chiefs started out 5-0, demolishing everyone in their way.

Smith was leading the Chiefs to the top of the AFC. After losing his starting job (and a chance to lead the Niners to the Super Bowl) to Colin Kaepernick, Smith was finally being given his time to shine. He even handed the Philadelphia Eagles what happens to be their only lose of the season thus far.

Since then, the Chiefs have gone 1-5, losing to the Pittsburgh Steelers, Oakland Raiders, Dallas Cowboys, New York Giants, and Buffalo Bills. Their only win in the past six games came against the dismal Denver Broncos.

So, is Smith in danger of losing his job again? I mean, it would be hard to blame head coach Andy Reid for pulling him. Nonetheless, Reid insists Smith is safe for now.

“That’s not where I’m at right now,” said Reid. “We’ve got a couple other things to take care of.”

Instead, Reid puts the blame on himself. In the first five weeks, Smith had no problems making things happen. Since then, the offense and the team, in general, has been falling apart. Reid sees it as his responsibility no to change up the personnel, but to make their jobs a little bit easier.

“That’s my responsibility when the offense starts that slow,” continued Reid. “We couldn’t get much rhythm going until the second half and then we got a little going. Again, I’ll take responsibility for that. Everybody’s got a piece. I can do a better job of putting [Smith] in better position to make plays. The offensive line can block better and receivers, every catch isn’t going to be an easy catch.”

Of course, Reid says this now, but there’s no telling what might happen, especially if the Chiefs remain in position to win the AFC West. Poor Smith might be losing another job to a young QB.