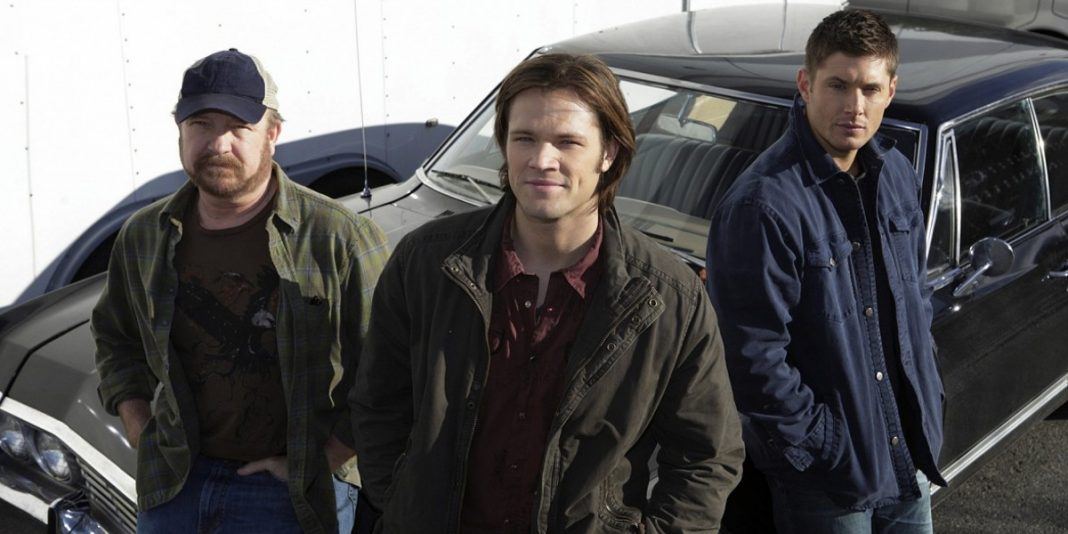 When one of our Movie TV Tech Geeks family members has something new out, we love to help promote it, especially when it’s something that every Supernatural fan will want to get their hands on.

Lynn Zubernis, who writes some pretty in-depth and intense Supernatural recap reviews, has her latest book hitting on May 9 Family Don’t End With Blood: Cast and Fans on How Supernatural Has Changed Lives (You can order it here), has interviewed nearly everyone from the show, and we’re happy to run her ‘best ofs’ leading up to her book launch. If you want to attend her Los Angeles book launch check it out here.

Check out her classic interview with Misha Collins.

Check out when we interviewed Lynn on her own Supernatural experiences. 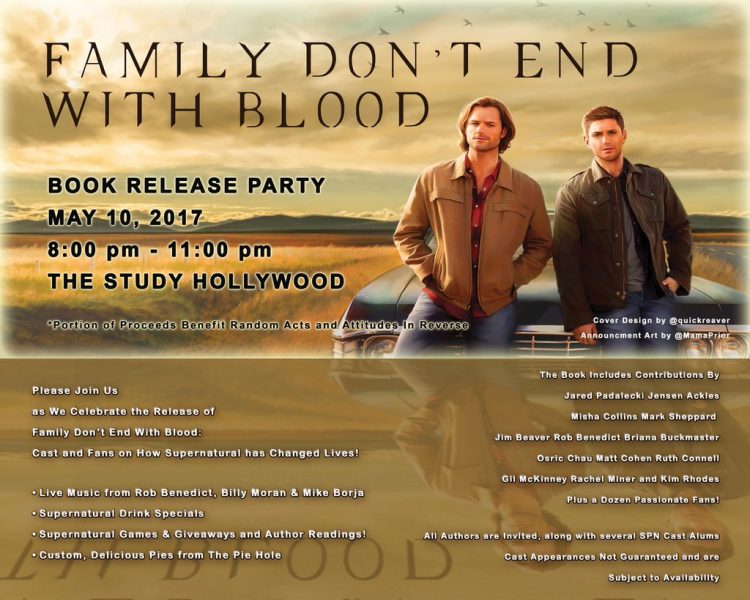 Next up, Jim Beaver (Bobby Singer), who wrote an incredibly powerful chapter for Family Don’t End With Blood. Here’s one of our favorite interview chats we’ve had with Jim over the years… 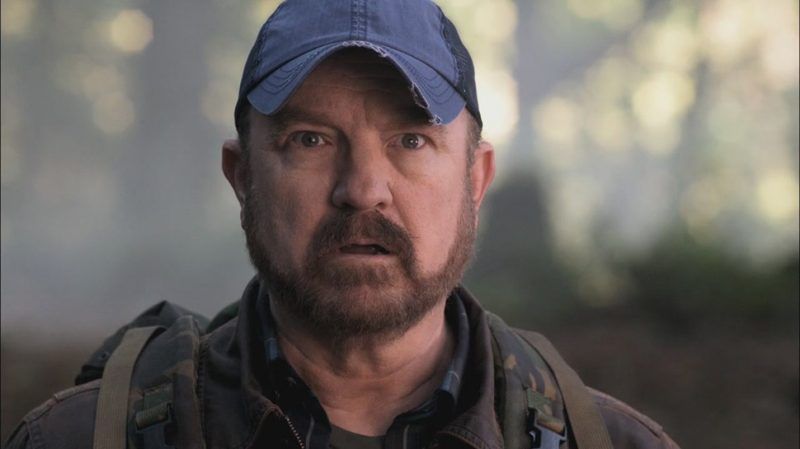 As promised, more from our trip to the Chicago Supernatural convention – in this case, some quality time with one of our favorite guys, Jim Beaver. Jim is one of the first actors we interviewed two years ago at the start of our Supernatural road trip, and damn, he really skewed our expectations. Not only did he invite us to come over and chat in his living room, but four hours later, we were still there! That conversation took place before Jim’s very first fan convention, so we spent some of the time trying to prepare him. (Yes, fans will line up for your autograph – little did he know!). Jim asked us as many questions about the fandom as we asked him, and we weren’t surprised that he ‘got it’ in so many ways. We also managed to get in a dare before we left, but honestly, we never expected Jim to be so creative in his tee shirt design. O—o

We missed sitting down with Jim at the last convention, because he was still signing autographs at 2 am and we were falling over with exhaustion. (So much for his disbelief that fans would line up for his autograph! ) Not surprisingly, his photo ops and autographs ran late in Chicago as well. Jim’s determination to give each and every fan some quality time was once again working against our chances of reconnecting with him. When 1:00 a.m. rolled around, and the other celebs had finished their turns at ‘speed dating with the stars,’ at the dessert party, we were ready to bail. (The desire for sleep does sometimes prevail!) Disappointed, we headed back to our room and walked smack into Jim who was being shepherded downstairs to make his belated appearance. So much for sleep.

Jim never sleeps, as anyone who’s friended him on Facebook has probably figured out, and apparently he never eats either. After making the rounds with the die-hard fans who waited for him at the dessert party, he was handed a chicken Caesar salad by one of the Creation staff. He had every intention of eating it after he said goodnight to Richard Speight Jr and Aldis Hodge in the bar. Somehow that turned into a few rounds of pool and by 2:30 that chicken Caesar was looking less than savory. When we all finally collapsed in the corner table of the deserted lobby bar, poor Jim was starving and lacking food options. But fandom is a curious and wonderful thing. Suddenly there were fans. With meat. In fact, they appeared with an entire deli platter and asked if we wanted it. (Whoever you are out there, thank you!)

Interviews with Jim tend to run the gamut from serious contemplation of the nature of fame and celebrity and fannishness to the kind of joking around that invariably makes Lynn do that embarrassing snort-when-you-laugh thing. This one took place at 3 am, so there was a lot more of the joking and less of the seriousness. Jim has mentioned before that while Bobby has evolved into a father figure for Sam and Dean, he has a different relationship with Jared Padalecki and Jensen Ackles. Much more a peer relationship than a fatherly one – in fact, Jim asks the boys for professional advice more often than the other way around. Lynn commented around her ham sandwich that Jim obviously wasn’t old enough to be their father in real life anyway, which earned her an eye roll and an incredulous smirk.

In one of our earlier chats with Jim, he talked about Bobby’s relationship with ‘the boys,’ and his delight in playing such a character. 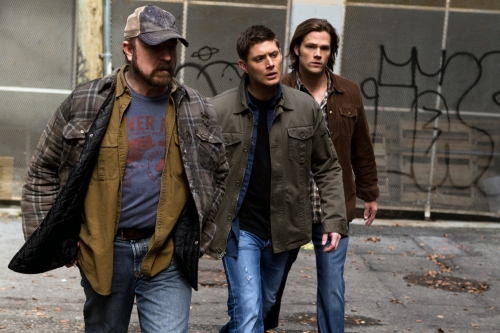 Jim: “It’s often alot funnier to be the guy standing there looking at somebody going, ‘you moron,’ than to be the guy doing the funny stuff. Somebody did a YouTube tribute to Bobby, and I was looking at it last night. I watched the clips fade, and I knew exactly what it was — it was a look I gave Jared when I was working on a gun. I was saying, ‘and it’s gonna take me as long as it takes me.’ And he asked if it was ready and I just gave this look. That kind of stuff is delicious. And a lot more fun than being the guy saying ‘Hey Bobby, is it ready?’ I can’t imagine anything more delightful than playing this guy.”

Much to our amusement, Jim also brought up the power of subtext, a topic with which most Supernatural fans are quite familiar. When Jim took his turn at playing The Trickster in Season 3, he relied on the subtle nonverbal nuances that the Supernatural actors are so damn good at to give the viewer cues that Bobby is not who he appears to be.

Jim: “I’ve always thought the best actors know something you don’t know. Like they’ve got a secret, and it may never get revealed. The best people I’ve seen act, I’m seeing all this stuff and there’s something underneath too, and it makes me want to watch and figure it out. Just to convey that there’s something going on other than just the words.

I love to find bits of subtext that didn’t occur to me before. Subtext is great.

My favorite movie in the world is John Ford’s The Searchers. The driving force is John Wayne’s love for his brother’s wife and vice versa. It’s the thing that drives virtually everything that happens to the main characters. And there is not one bit of dialogue actually relating that. You see the looks between the characters, you see his reaction when she dies, you see, but nobody says a word about it.”

There followed a long conversation about Freudian interpretations of Sam and Dean and long looks and nonverbal cues, which eventually got around to a discussion of Jensen and Jared’s acting ability.

Jim: “It wouldn’t work if these guys weren’t good actors. I think you could do an episode of Supernatural without a single word of dialogue with this bunch. Not for the gimmick value, but because the crew on this show is capable of doing an awful lot of expression non-verbally, and making people really think deeply about what is being conveyed with no words. I did an episode of Melrose Place, and I wouldn’t want to do an episode with no dialog with them. But on this show, we feed off each other pretty well. The fact that we all like each other is helpful, but it’s also the fact that Jared, Jensen and I must be very similar actors. We all three are the kind that can be joking around, and then they say action, and we are in it. None of us are the kind of guy that has to sit in a corner for an hour to get ready. Nothing wrong with that, but we’re just very attuned to the same kind of work. We just kind of relate to each other in ways that work well, and fit well. That the boys are good buddies and enjoy each other’s company, that too is not all that common. Sometimes magic hits. I don’t know if there is any coincidence that there are three guys whose names all start with J and are all from Texas. I feel like I’ve got a couple good friends in Jared and Jensen. And to a certain extent, you can’t fake that chemistry. I feel pretty lucky to be a part of it.”

Jim did get serious at our late night (early morning?) dinner chat in Chicago when he talked about the challenge of his character being confined to a wheelchair, though, saying how tough it was to have to stay down all the time, to not be able to move around like you’re used to. (In our experience, Jim rarely stays still for long – where does the guy get all that energy??) Jim’s capacity for empathy is clearly one of the abilities that make him a kickass actor, and he went on to say that as difficult as it is playing Bobby in a wheelchair, he was always acutely aware that he could get up when they called ‘cut.’

He went on to say that Jared and Jensen delighted in ribbing him during some scenes where Bobby’s bare legs are showing as he’s sitting in the wheelchair in a hospital scene, taunting him about how pale and white his legs were.

“So I explained to them,” he continued, voice growing serious, “that when I was in the POW camp, one of the things they did to us was they used bleach on our legs….and it was horrible….they’ll always be white like this because of that.”

Lynn stared at him dumbfounded, mouth open in horror, trying frantically to remember whether Jim had ever spoken about being a POW before, wondering how Jim had survived, what kinds of scars – when Jim suddenly burst into laughter, slapped her on the knee and yelled “Gotcha!”

Apparently, he got Jensen and Jared too.

This time we’re glad we stayed up until 4 am. Totally worth it! 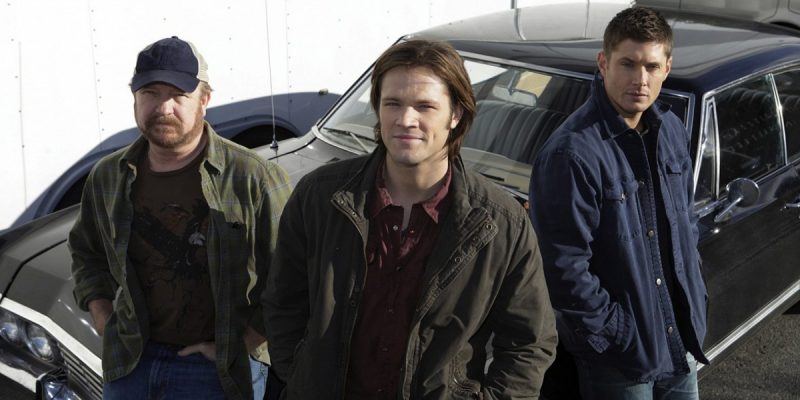 We will continue through the launch of Lynn’s book with some of her best Supernatural interviews. Check out Jim’s chapter – along with many other cast and fan chapters – in Family Don’t End With Blood. You can pre-order it here.