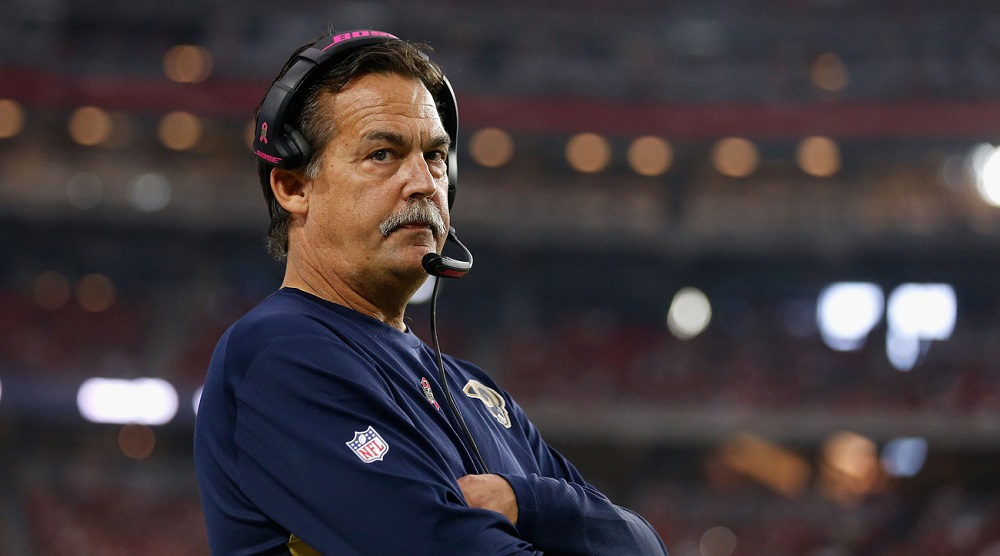 2017 marks the first season since 1980 that the NFL has been without Jeff Fisher. After 16 seasons as head coach of the Tennessee Titans and five leading the Los Angeles Rams, Fisher is now without a team.

Now, despite Fisher never leading the Rams to a winning record, he still likes to think that he is partially responsible for their success one season after they dumped him. According to Fisher, while Sean McVay is doing a great job, he is the one that helped put together the Rams team as it stands and coordinate the move from St. Louis to Los Angeles.

“I’m a huge fan of the Ram players,” said Fisher. “They’re basically—I don’t want to say my players, but I had a lot to do with that roster. Left them in pretty good shape. And Sean, as he’s proven in this very short period of time, is an outstanding young coach. And he’s got the offense rolling, which they needed.”

Fisher also likes to claim a little bit of credit for drafting Jared Goff with the No. 1 overall pick in last season’s draft.

“We knew that was coming,” said Fisher. “That’s why we traded up with [the Titans] to get him because we knew he had that kind of potential. We felt like both quarterbacks had a chance to be franchise quarterbacks. We were right. Philly got theirs, and the Rams got theirs.”

The truth, however, is that the Rams were ready to fire Fisher before last season and before the draft. The only reason Fisher was retained for one extra season was because of the move from St. Louis to Los Angeles. The Rams figured that because Fisher has experienced a move before (when the Houston Oilers packed up and became the Tennessee Titans), so it might be a good idea to keep him around for around season to make the process as smooth as possible.

Additionally, Goff didn’t exactly have a great year under Fisher’s leadership. Under McVay, however, Goff’s passer rating has improved over 35 points, an NFL-best turnaround. Goff is now amongst the top-five all-time in passer rating for second-year quarterbacks.

So, I’m not sure how appropriate it would be to give Fisher much (or any) credit for the team’s success this season. They’ve been doing fantastic with the same roster he had, but if anyone deserves the real credit for that it is probably the general manager.

Nonetheless, as Fisher looks for a new job in the NFL, he continues to point to his past accomplishments.

“I get a kick out of people who go, ‘Oh, you just tied Dan Reeves for the most losses in the history of the National Football League,’” said Fisher. “Well, I’m a few wins away from being in the top 10. So, where do you want to emphasize; what’s your point? Two franchises, five different cities, six different stadiums. Not an easy thing to do.”

So, remember, Fisher is responsible for turning the Rams around. No wonder teams have been clamoring to sign him.