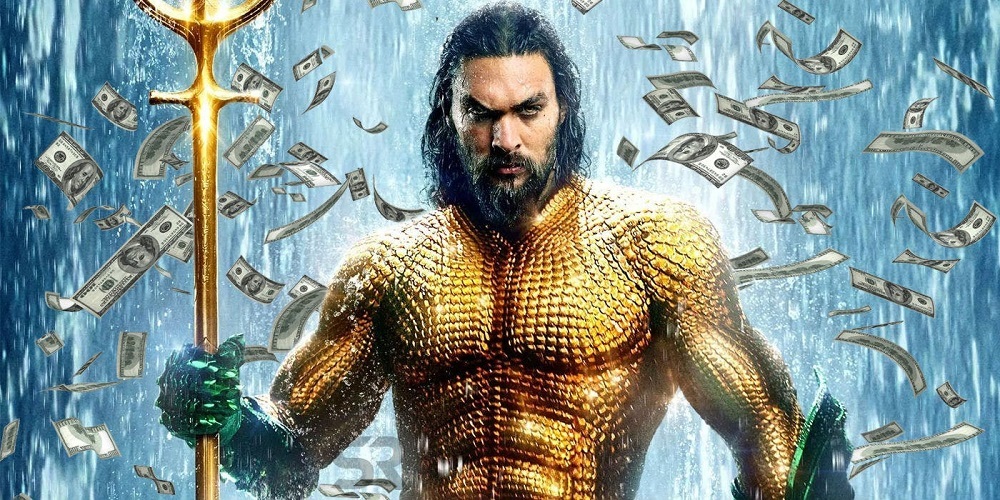 It comes as no surprise that Jason Momoa‘s “Aquaman” easily topped the holiday weekend box office charts. The king of Atlantis has already pulled in $482.8 million worldwide so Emily Blunt and Hailee Steinfeld were no match. Momoa also brought DC Comics in another much needed along with “Wonder Woman.”

In a flood of new releases, “Aquaman” easily swam past “Mary Poppins Returns” and “Bumblebee” to lead the busy pre-Christmas weekend with an estimated $67.4 million over the weekend, according to studio estimates Sunday.

Without a “Star Wars” film on the December schedule for the first time in four years, a crowded slate of films sought to capitalize on the lucrative holiday period in theaters.

The DC Comics superhero film “Aquaman,” which cost Warner Bros. $200 million to make, arrived already a juggernaut overseas, where it has grossed more than $400 million in three weeks of release. Including advance previews, the Jason Momoa-led “Aquaman” reeled in $72.1 million in U.S. and Canada theaters, bringing its global total to $482.8 million.

“Aquaman,” directed by James Wan, has proven to be a stabilizing “Justice League” spinoff for Warner Bros. following bumpier DC releases outside of “Wonder Woman.” The film garnered an A-minus Cinemascore from audiences.

For the studios, the weekend was as much about setting themselves up for Christmas to New Year’s, when theaters are routinely packed through the week. With Christmas falling on a Tuesday, studio executives said the weekend was an unpredictable and distraction-filled one, competing with some of the busiest shopping days of the year.

“We really kick off starting Tuesday,” said Warner Bros. distribution chief Jeff Goldstein, who said the “Aquaman” performance came in just above the studio’s $65 million forecast. “With kids not really returning to school until January 7, this aligns the stars for us in a really positive way.”

Returns were more modest for Disney’s “Mary Poppins” sequel and Paramount’s “Transformers” spinoff, though each had reason to expect strong business through the holidays.

“Mary Poppins Returns,” starring Emily Blunt and directed by Rob Marshall, debuted with $22.2 million over the weekend and $31 million since opening Wednesday. That was on the low side of expectations for the musical, which cost $130 million to make.

“May Poppins Returns,” which co-stars Lin-Manuel Miranda, will depend heavily on legs through the holiday season. On its side are good if not spectacular reviews (77 percent fresh on Rotten Tomatoes), an A-minus CinemaScore from moviegoers and four Golden Globe nominations.

“Poppins” still narrowly edged “Bumblebee,” which opened with $21 million. That, too, is a soft beginning for a film that cost about $135 million to make after tax credits. It’s also far off the pace of the “Transformers” films, the last of which (“Transformers: The Last Knight”) debuted with $44.7 million in summer 2017.

But “Bumblebee,” a “Transformers” prequel directed by Travis Knight and starring Hailee Steinfeld, has something the Michael Bay films never had: good reviews. “Bumblebee” was the weekend’s most acclaimed new wide release with a 94 percent fresh rating on Rotten Tomatoes. Audiences also gave it an A-minus CinemaScore.

“The pre-Christmas preoccupation for moviegoers affected everyone. All movies were impacted slightly by that,” said Kyle Davies, head of distribution for Paramount. “It doesn’t concern me. We played really well with great reactions. The game plan has always been that we’re now starting that play period where people go multiple times over the next few weeks, and that’s the whole point.”

“To me, this weekend was a dress rehearsal for the big push that starts Christmas Day,” added Davies.

Also in the mix is Sony’s well-reviewed “Spider-Man: Into the Spider-Verse,” which slid to fourth in its second week with $16.7 million in ticket sales. The film also made one of the best debuts for an animated release in China where it was no. 1, grossing $26.1 million over the weekend.

Clint Eastwood’s “The Mule” added $9.3 million in its sophomore frame, bringing its two-week total to $35 million. Bradley Cooper, who co-stars in “The Mule,” could also celebrate his “A Star Is Born” crossing $200 million domestically.

Largely overlooked in the onslaught at theaters was STXfilms’ “Second Act,” starring Jennifer Lopez. The romantic comedy debuted with an estimated $6.5 million in 2,607 locations, drawing an audience that was 70 percent female.

But the weekend’s real flop was “Welcome to Marwen,” the Robert Zemeckis-directed fantastical drama starring Steve Carell as an imaginative man whose scale model town helps him rehabilitate after a trauma. The film, which cost at least $40 million to make, earned just $2.3 million in 1,900 theaters. It’s the second straight flop for Universal (which teamed with DreamWorks for “Marwen”) following “Mortal Engines.” That $100 million film debuted last weekend with $7.5 million film in ticket sales.

Yet the weekend managed to nearly equal the box office of the same weekend last year when “The Last Jedi” was in its second week of release and “Jumanji: Welcome to the Jungle” opened. Ticket sales for the “Star Wars”-less weekend were down a mere 2.1 percent, according to Comscore.

“The collective and cumulative strength of these newcomers, particularly ‘Aquaman,’ and a huge slate of holdovers gave us a stronger weekend than anyone imagined,” Dergarabedian said. “A superhero movie in December can make up for not having a ‘Star Wars’ movie in December.”

“The period between Christmas and New Year’s is one of the busiest weeks of the year at the cineplex,” he said. “And all of that should lead to the beginning to a very strong 2019 in theaters.”