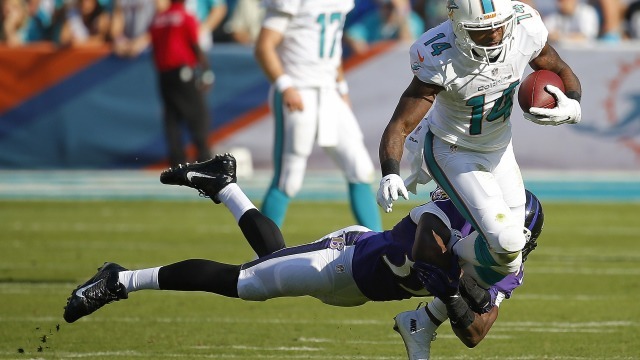 Remember a few weeks ago when I wrote about the Miami Dolphins joining the ranks of the Cleveland Browns and Jacksonville Jaguars? Well, Joe Philbin got fired, and absolutely everything turned around in South Beach.

Suddenly, with Dan Campbell steering the ship, the Dolphins have 82 points in two weeks and two wins. Breakout wide receiver Jarvis Landry can be thanked for 18 of those points.

Landry finished Sunday’s obliteration of the Houston Texans with five catches for 83 yards and two touchdowns—both of them in the first quarter. One of them coming from a 15-yard pass which Landry then turned into a 50-yard score by dancing, ducking, and bobbing his way through six defenders. Six Texans missed. Remember when this squad was supposed to be No. 2 in the NFL?

Landry probably could have done more damage, but Campbell let off the gas in the second time after the Dolphins led 41-0 at halftime. They honestly could have scored 100 points if they really wanted to.

Let’s also not forget about the 22-yard rushing touchdown Landry had against the Tennessee Titans last year. Apparently the LSU Tigers are just a star wide receiver factory.

Landry, quarterback Ryan Tannehill, Campbell, Lamar Miller, and the rest of the Dolphins have really rallied to save their season. After starting 1-3, they were down for the count; but two back-to-back blowout wins puts the team at 3-3 and far from done.

Unfortunately, it’s a little too early to start celebrating. The Dolphins travel to Foxborough now for a Thursday Night Football showdown with the undefeated New England Patriots who are sitting comfortably on top of the AFC East after topping the New York Jets.

A win Thursday would be more than a step in the right direction, it would be a statement. The Dolphins aren’t messing around, and they aren’t to be messed with. The Dolphins would go from being talked about in the ranks of the Jags and Detroit Lions to in discussions with the Pats, Green Bay Packers, Carolina Panthers, and Denver Broncos—all in a matter of about three weeks.

Do I think they’ll beat the Pats? No. Am I rooting for them?