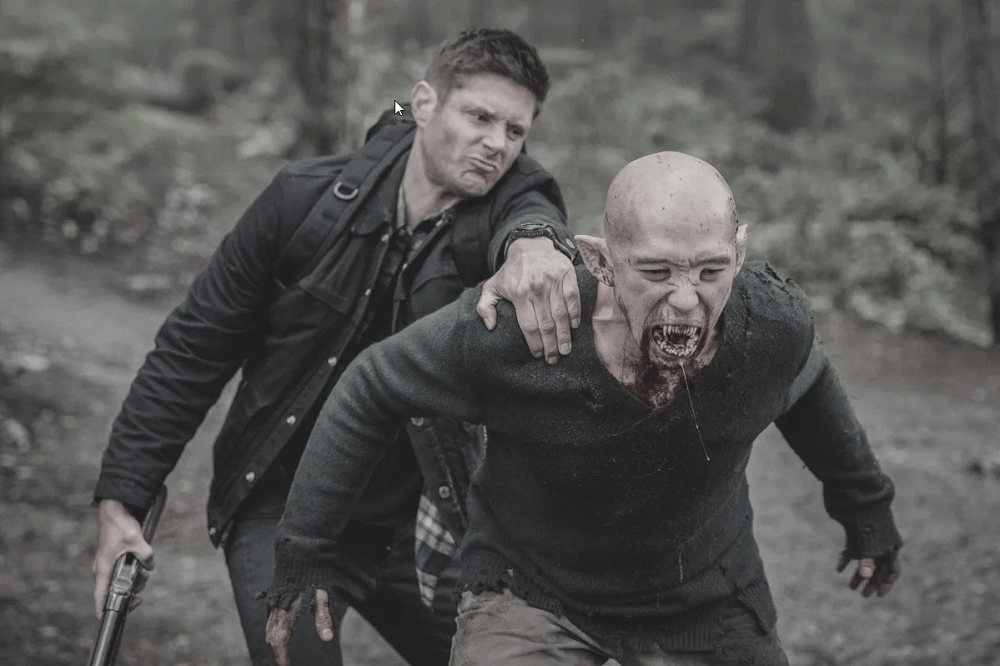 Remember last week I ended my Supernatural review with “That said, I’m no fool, and I know foreshadowing when I see it”?

Man, being right is a burden.

Episode 13.21, “Beat the Devil” was penned by Robert Berens, directed by Phil Sgriccia, and opens up with a dream sequence. This is the second dream sequence this season. That’s two too many, frankly. The dream sequence is such a TV and movie cop out, it’s an attempt at showing the inner workings of a character, but more often than not it’s just useless filler.

I won’t say this is completely without function; I do get it, this was Berens attempting to show that Sam just wants his family and friends safe and together. It’s still a tired device. 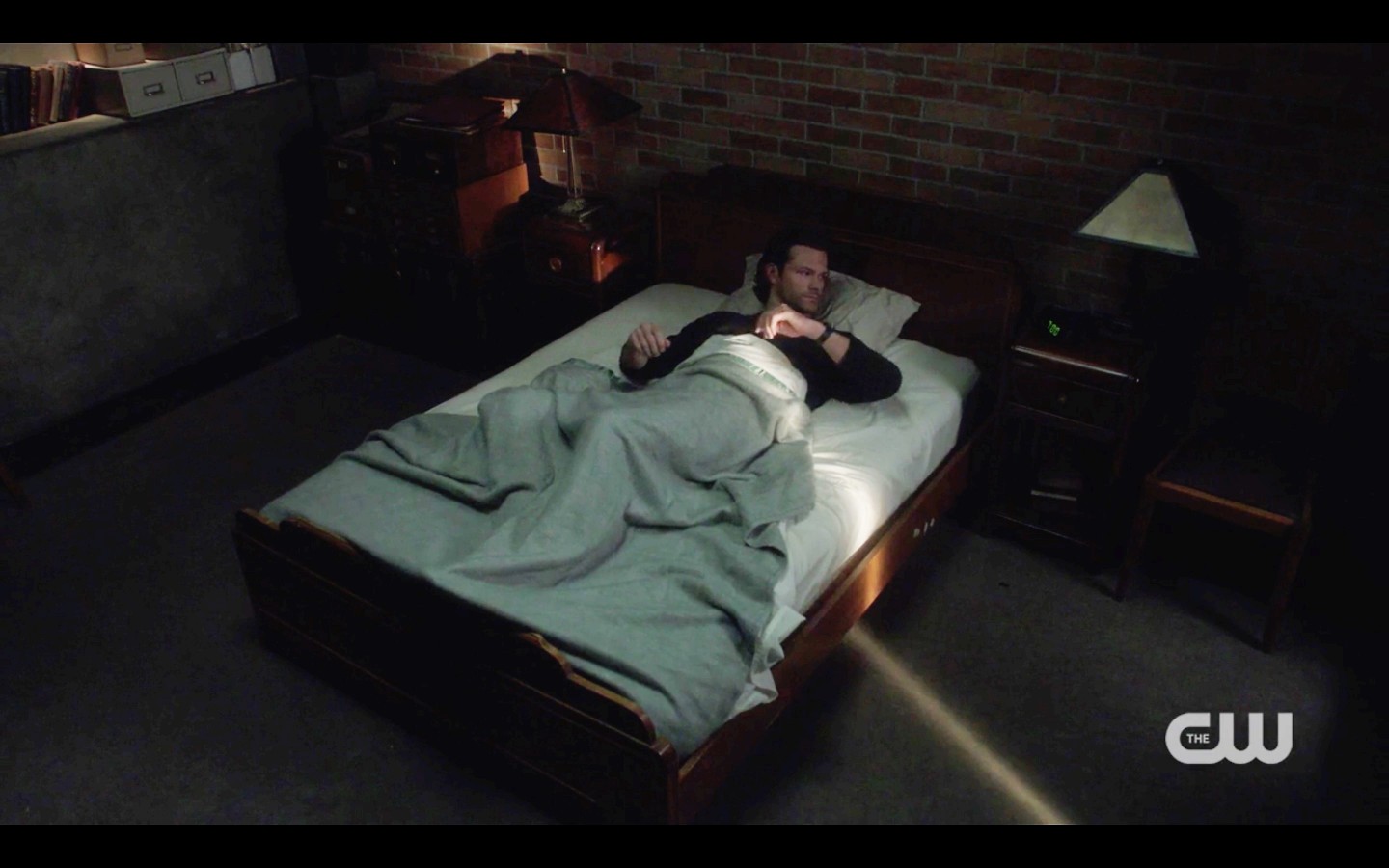 Once Sam awakens it’s time for them to get ready to go rescue Mary and Jack. Of course, one of the first things out of Sam’s mouth is, “how’s Gabriel”.

Do you ever get the feeling you’re being trolled? I most certainly do. Just once, once can someone ask Sam how he is? I’d start a drinking game, take a shot every time someone other than Sam is asked how they are, two shots if Sam is the one asking, but no one would survive. After that we are treated to the longest, most forced penis/semen joke in the history of this show. Look, a swift, well-placed dick joke is a thing of cheap comedy beauty. There’s no one out there who hasn’t giggled along with a perfectly done “that’s what she said” zinger. This, however, was not that. This was grace = semen, the portal = an unsustainable erection, Gabriel is indignant and must reassert his manliness and who better than Rowena, am I right? Whatever. That whole thing happened, and it’s all so poorly timed because it’s juxtaposed against one of the most infuriating scenes I’ve ever had to watch.

The above scene is spliced against a scene of Sam pleading to Dean and Castiel for them to not guilt him into trying to use Lucifer and his grace to fuel the portal. It is, of course, Castiel’s idea and he even has the unmitigated gall to force Sam to share the blame for Lucifer being free.

Oh, nay-nay, sir. See, let’s be kind/rewind back to season 11, the season where Sam, once again, ended up in The Cage (or an approximation of The Cage? Honestly, that was a confusing mess, let’s not even try to go there) with Lucifer and stood up to his abuser, declaring that he would not give in to Lucifer’s demands. Unknown to Sam, the others had Rowena cooking up a spell to send Lucifer back to Hell, but y’know what happened instead? Castiel, who did know about the spell, let Lucifer talk him into letting him hitch a ride inside Castiel and right outside that cage.

The reasons why this was so messed up are aplenty, but the fact that this selfish, literally pitiful betrayal was retconned into Castiel being some brave hero for being stronger than Dean or Sam; for doing something they wouldn’t, was grotesque and nonsensical enough, but to now have Castiel spread that blame to Sam like a thick schmear of room temperature cream cheese was like watching Supernatural while hitting the peak wave of an acid trip.

I mean, Castiel is talking about how being used by Lucifer was “the worst possible violation,” meanwhile not only was it consensual, as far as we saw Lucifer stuck Castiel in the corner of his own mind and vegged him out on Netflix. How that compares to what adds up to thousands of years of torture that Sam’s soul endured I’ll never understand.

That said, I don’t actually expect more of Castiel than that, in fact, it’s pretty in character. The problem with that is they keep telling us that Castiel is a good friend, that he’s “family,” that he has too much heart. All tell and no showing at all.

So if Castiel is in character then what’s my issue? Dean.

At the end of the previous episode Dean tells Sam that all he cares about is Sam being safe; now in this episode he’s willing to try to capture Lucifer, despite Sam’s protests, despite Sam’s fear, despite Sam telling them that they’ve tried this before and it never works in their favor. Dean Winchester is better and smarter than this, Robert Berens.

Sam caves though, because of course he does. The scene of them capturing Lucifer is not only overly drawn out, but it’s yet another example of everyone but Sam getting to take a shot at Lucifer. Once they get him back to the bunker, we’re forced to endure a lot of exposition that would have maybe been necessary if it wasn’t completely borked in the second half of the episode. 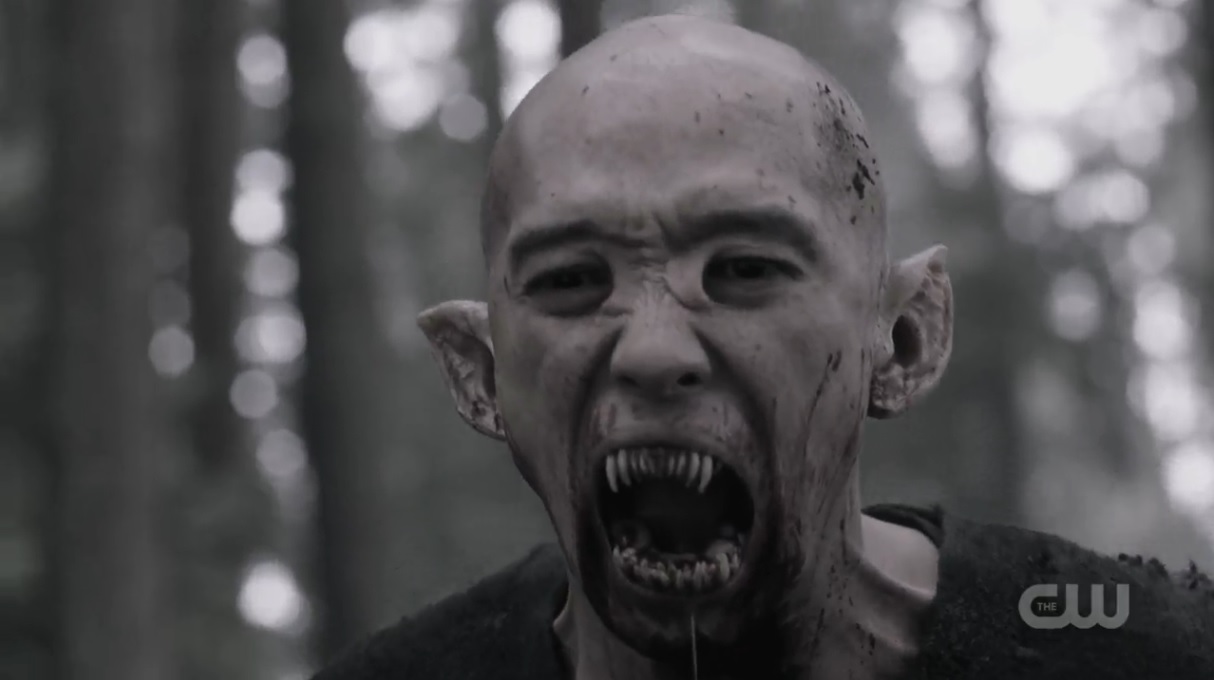 The hardest thing about this episode is that as angry as it made me, the second half is gorgeous. Maybe because the AU world is so washed out that I can’t help but be reminded of the early seasons of Supernatural and how gorgeous the aesthetic of it was. Sure it was dark and muted, but that added to the feeling of the show.

Now it’s all bright primary colors and garish neons. The AU, like Purgatory, feels more like Supernatural than Supernatural itself.

One of my favorite lines happens as we get into the AU world and ironically it’s said by Gabriel, who you all know I cannot stand.

“Not our world, not our problem.”

He’s right. Dean gives him this look like he can’t believe Gabriel can be so detached and unconcerned, but he’s totally right. And, well, Dean should’ve listened to him, because now they have vampires to deal with. Of course they do, because this episode was written by Robert Berens.

And during a big fight scene, Sam gets his throat ripped out, and he dies. Because this episode was written by Robert Berens.

And Dean abandons Sam’s body. Because this episode was written by Robert Berens.

That’s right; we now have an overstuffed, low-rent version of the season 11 standout episode, “Red Meat.” In theory, getting a redo of what is one of the best episodes in recent Supernatural history should’ve been a treat, here’s where it went sideways.

For all that Castiel flipped his angel blade in this episode, he did nothing with it. He slowly trotted after the vampires dragging Sam’s body away, but he didn’t do anything. He didn’t fight them, not with his powers (whatever they may be) and not physically. He just left Sam to be eaten. And then had the audacity to not only keep Dean from going after Sam, but to chastise Dean. I don’t understand this scene. I don’t understand Castiel’s aggression towards Dean about Sam; I don’t understand him saying they don’t have time given that as far as he knows they have all the time in the world thanks to Lucifer’s grace. Hell, they know they have enough time to walk from “Northeast” Kentucky to Dayton, Ohio, which is at least two and a half days by foot if you walk non-stop, which angels can do, but humans can’t. 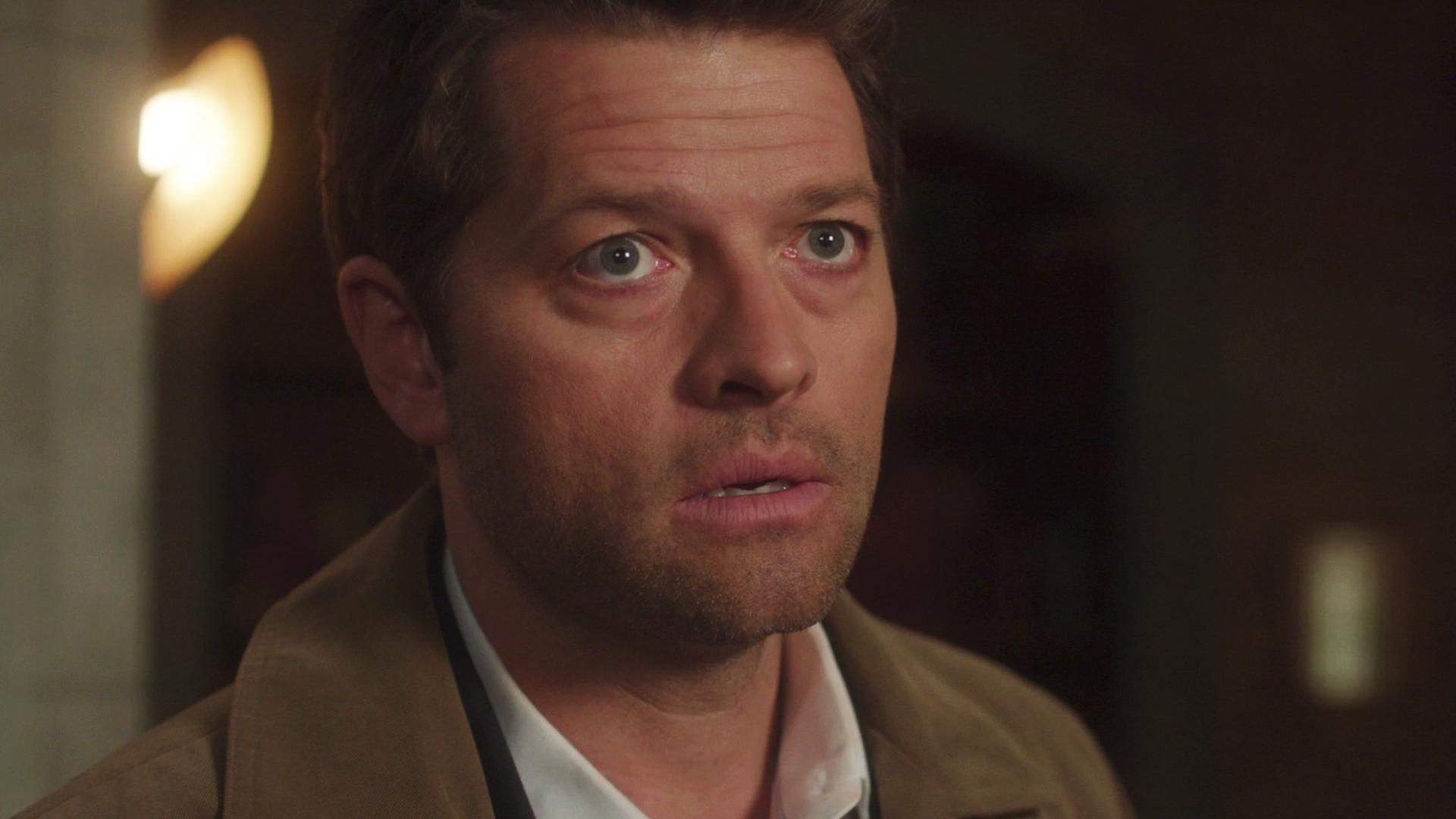 If it sounds like I’m being too hard on Castiel, well, I’m not. He was awful in this episode, both callous and useless. The most relatable moment in this episode was Jack yelling at Castiel and literally pushing his hand away.

I can’t help but wonder why Castiel and Gabriel didn’t take out the vampires and carry Sam’s body. They are, after all, super strong heavenly beings.

Ah, I get why, it was so that Lucifer, oh did I mention Lucifer overpowered Rowena and is free and through the portal himself and resurrected Sam, could mock and blackmail Sam into putting in good word for him with Jack. So that Sam is now indebted to his torturer, his rapist, his nightmare.

It was so that, once again, Sam can be the bad guy. I can’t wait to watch everyone tell Sam how he screwed up in the next episode. No really, it’s gonna be so fun.

I reiterate, the second half of this episode was stunning. The shots of the tunnel were dank and claustrophobic and just the overall feel of the AU world appeals to the part of me that finds all the glaring brightness of the show to be a direct conflict with the actual tone of it. I could stay in the AU for the rest of the series and watch Sam and Dean fight whatever mutated monsters they come across. 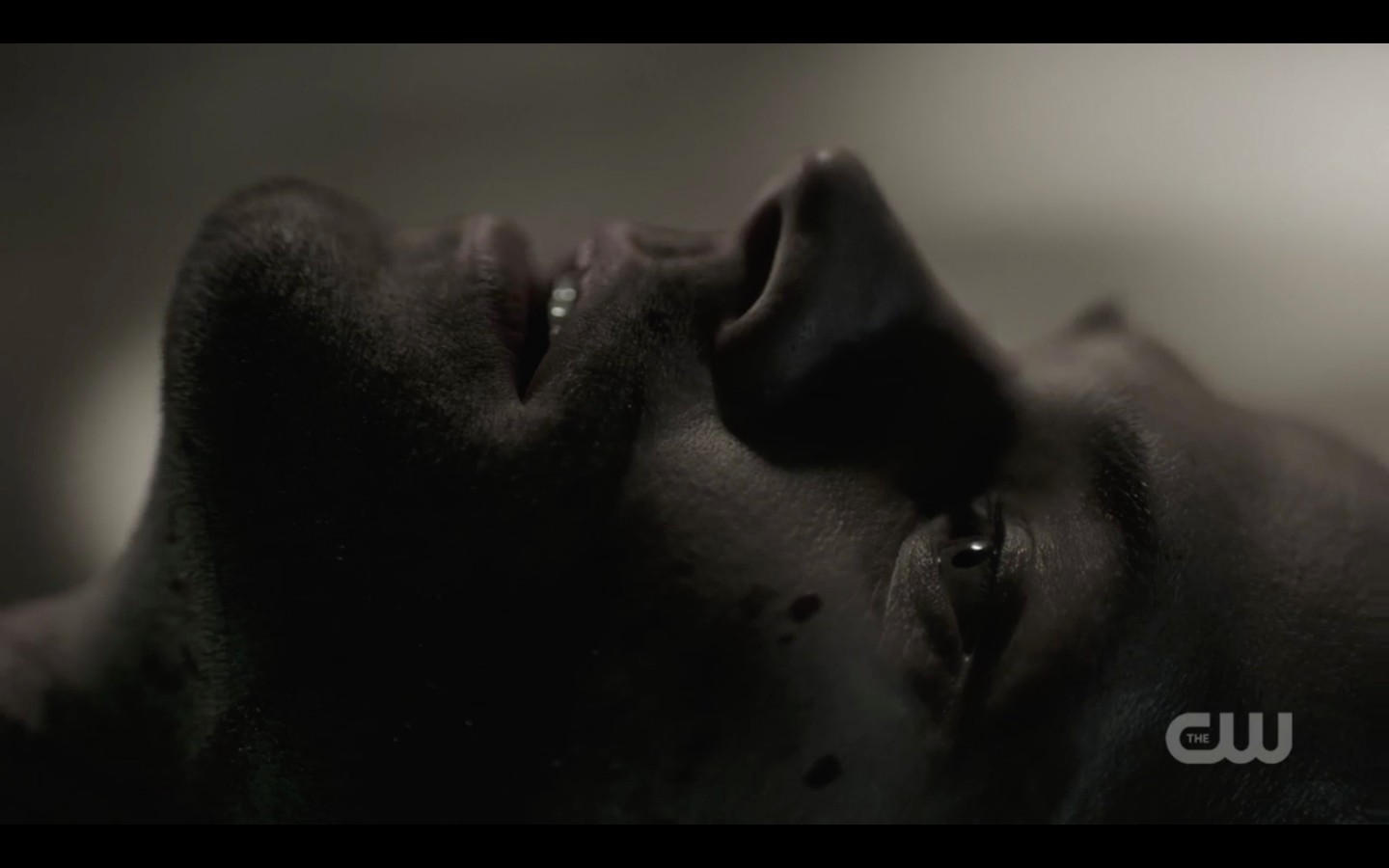 Additionally, as morbid as this is going to sound, the shots of Sam lifeless and bloody were stunningly framed and lit. All at once heartbreaking and breathtaking. 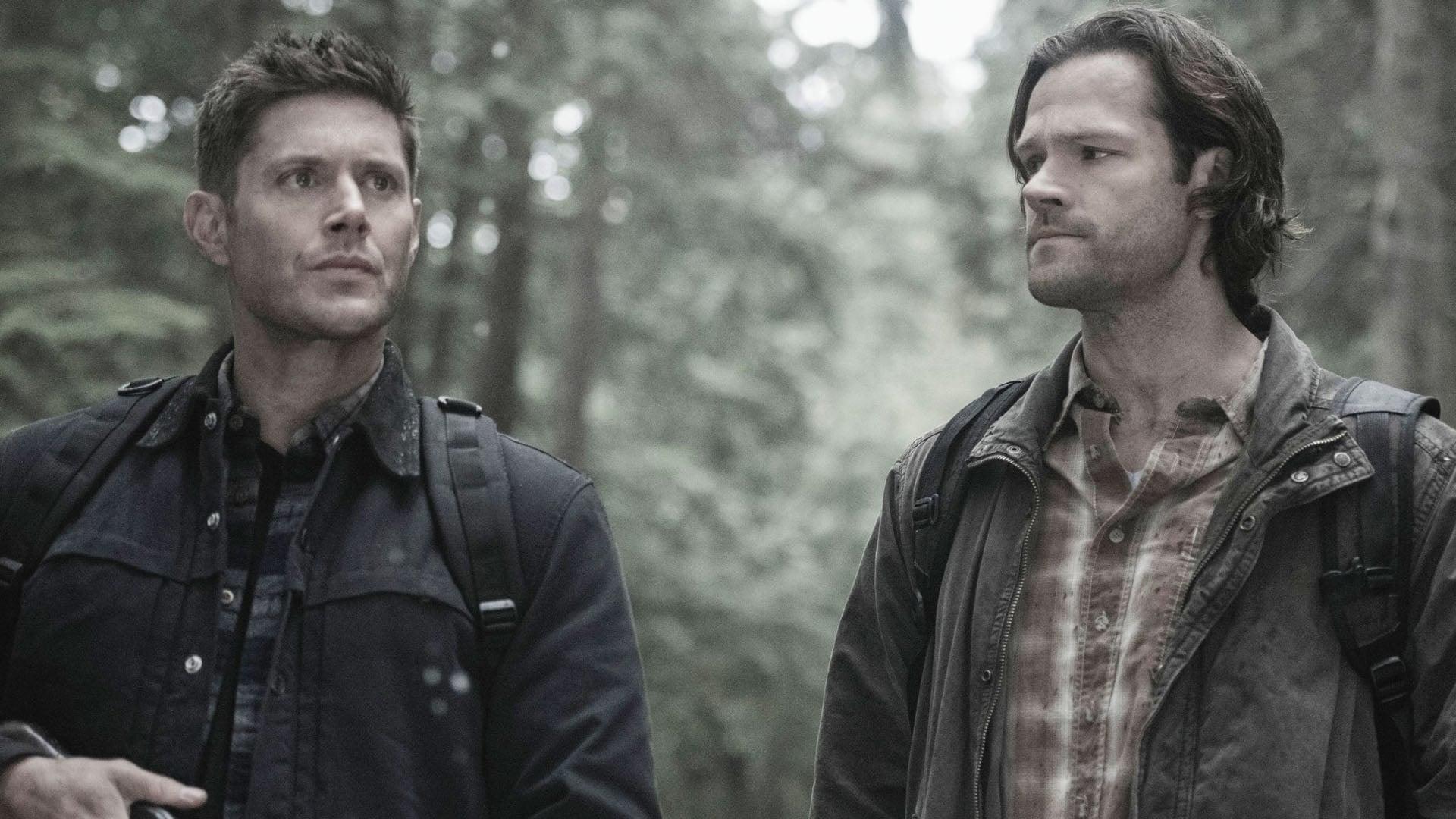 What truly saves this episode are the performances Jared Padalecki and Jensen Ackles brought to it. From top to tail, the way Jared takes Sam from reluctant to hopeful to terrified was some of Padalecki’s best work. The way he holds his body when Lucifer is mentioned or is actively taunting him is so subtle, yet so effective. Not one to be outdone, Ackles brings a quiet, angry grief to that latter part of the episode, tight jawed and lost. 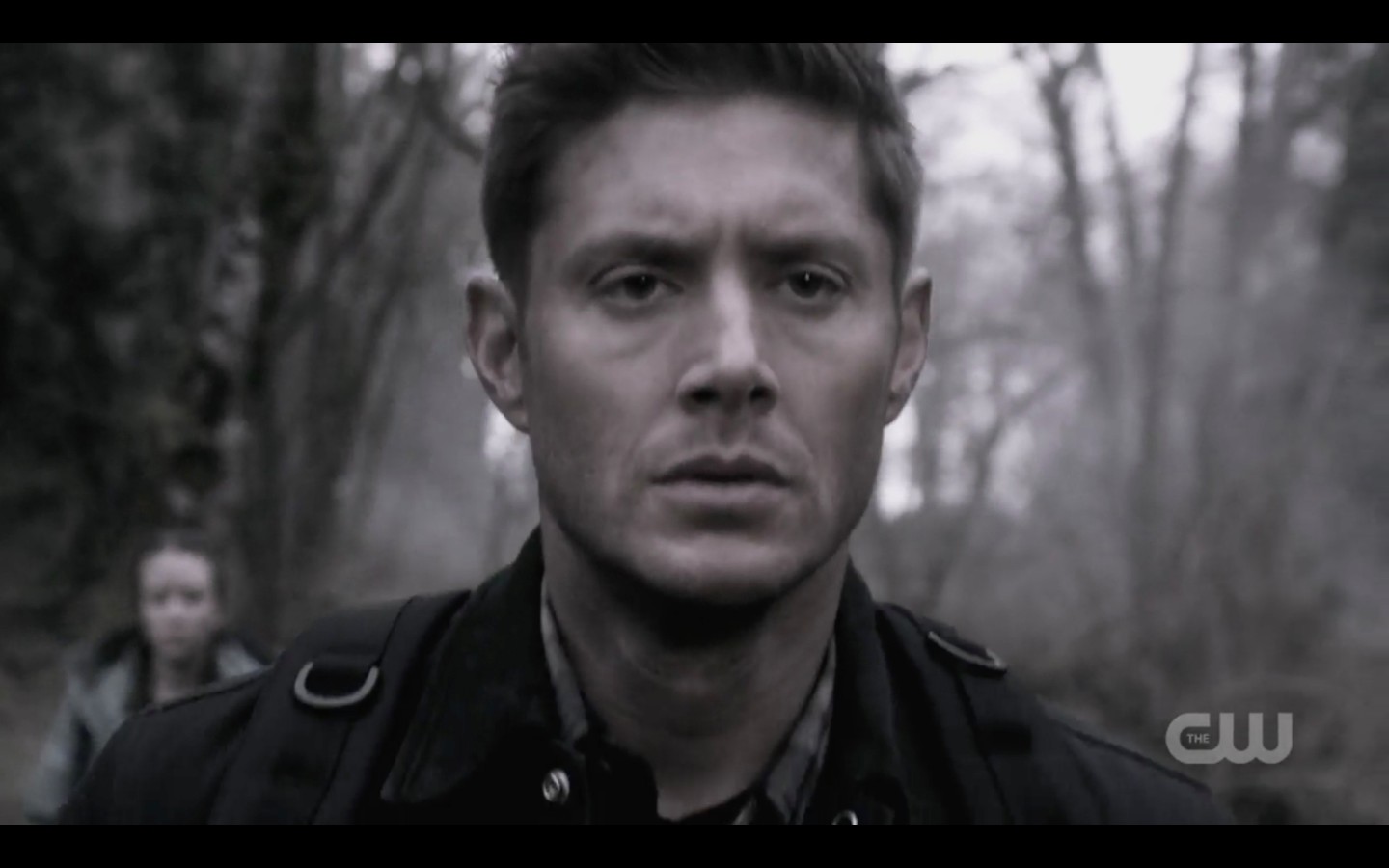 After all this time, one would think that his single perfect tear would lose its effect, but nope, the broken way Dean looks at Mary when she asks for Sam is enough to rip your heart out. His stubborn determination to go back for Sam’s body, knowing that it’s likely going to not end well for him either, is the Dean Winchester we know. It’s the Dean Winchester that got everything he’s been striving for all season and realizing it means absolutely nothing without Sam next to him.

So, yeah, I’ll go on record and say I kinda actually hate this episode overall. The first third of it was just dumb and the rest? I’m offended by it, in fact. I’m offended that the writer essentially plagiarized himself. I’m offended by the predictable way this writer does all his episodes. I’m offended by the way several of the characters were written. I’m offended by the neverending exposition dumps. This was the only episode Robert Berens did this season that didn’t relate to the spinoff he and Andrew Dabb are hoping to land and maybe he resents that he’s still forced to write for this show and not his own. Maybe he just didn’t think we’d notice that he copied off his own work.

Check out what Lynn thought about this episode if you’ve not already. She’s in line with Vinnie this week which caused quite the Twitter stir.