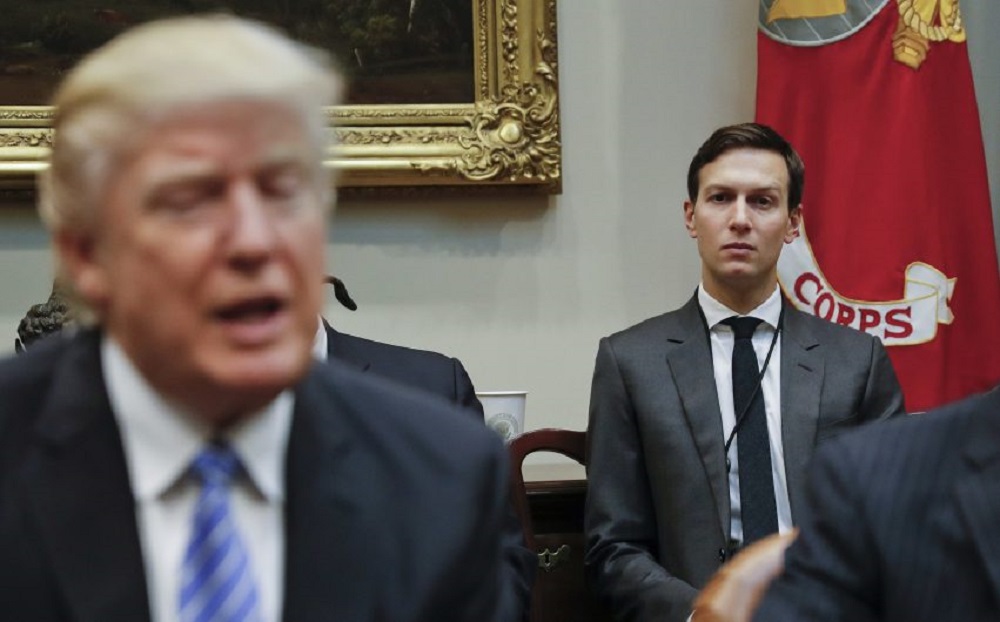 Donald Trump‘s son-in-law, Jared Kushner, seems to be the best multi-tasker in the world, or at least that’s what the president thinks. The 36-year-old has absolutely no governing experience, but he’s now in charge of overhauling the entire government, along with all of his other White House tasks.

These ‘other’ tasks include international diplomacy to keeping his father-in-law off Twitter with those tantrum tweets along with the usual putting out daily fires at the White House.

Here’s a full list of all his jobs which will give you an idea of why there’s so much chaos in this administration.

Trump confirmed in January that Kushner would join him as a senior adviser in the White House working closely with Chief of Staff Reince Priebus and Chief Strategist Steve Bannon. His specific duties were not delineated, but Trump noted his son-in-law would be an “invaluable member” of his team working to implement his policy agenda.

The Office of American Innovation is expected to tackle domestic issues such as Veterans’ Affairs, workforce development and opioid addiction, the Associated Press reports.

“The government should be run like a great American company,” Kushner told the Washington Post of the initiative, one of the few interviews he has granted since becoming a senior adviser. “Our hope is that we can achieve successes and efficiencies for our customers, who are the citizens.”

Being a ‘shadow diplomat’

Trump’s belief in Kushner’s diplomatic capabilities also extends to other areas of the world. The Washington Post reported in February that, in the White House, Kushner is “the primary point of contact for presidents, ministers and ambassadors from more than two dozen countries.” The Post also reported Kushner worked with Mexican Foreign Secretary Luis Videgaray on language for Trump’s executive order on a wall with Mexico.

Kushner was also expected to visit Canada in early January to talk to Canadian Prime Minister Justin Trudeau’s Cabinet while they convened to discuss ties with the United States, but the visit was scrapped for “logistical reasons,” Reuters reported.

Brokering peace in the Middle East

Just two weeks after Trump’s election, when reports were circulating that he wanted to name Kushner to an advisory role but could be thwarted by the anti-nepotism statute, the then President-elect told the New York Times he wanted his son in law involved in brokering peace between the Israelis and the Palestinians.

“I would love to be able to be the one that made peace with Israel and the Palestinians,” Trump told the paper. “I think he’d [Jared] be very good at it. I mean he knows it so well. He knows the region, knows the people, knows the players.”

Trump was even more forceful about Kushner’s role six weeks later. “Jared is such a good kid, and he’ll make a deal with Israel that no one else can,” he told the Sunday Times. “He’s a natural deal-maker — everyone likes him.”

After a Chinese investor chose not to pour billions of dollars into 666 Fifth Avenue (a Manhattan highrise owned by Jared Kushner’s family), he’s got more time it seems. 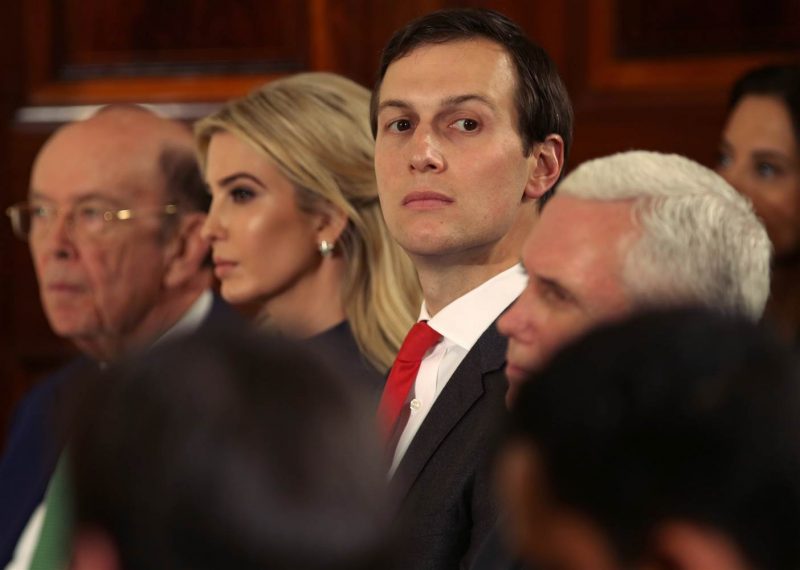 Jared Kushner has been a power player able to avoid much of the harsh scrutiny that comes with working in the White House. But this week he’s found that even the president’s son-in-law takes his turn in the spotlight.

In a matter of days, Kushner, a senior Trump adviser, drew headlines for leaving Washington for a ski vacation while a signature campaign promise fell apart. The White House then confirmed he had volunteered to be interviewed before the Senate intelligence committee about meetings with Russian officials. At the same time, the White House announced he’ll helm a new task force that some in the West Wing have suggested carries little real influence.

Kushner became the fourth Trump associate to get entangled in the Russia probe. North Carolina Sen. Richard Burr, the chairman of the intelligence committee, said Tuesday that Kushner would likely be under oath and would submit to a “private interview” about arranging meetings with the Russian ambassador and other officials.

The news came as the White House announced Kushner would lead a new White House Office of American Innovation, a task force billed as a powerful assignment for Kushner. But the task force’s true power in the White House remained unclear, according to a half-dozen West Wing officials and Kushner associates who spoke on the condition of anonymity.

The official White House line is that the group would have sweeping authority to modernize government, acting as strategic consultants who can draw from experiences in the private sector — and sometimes receive input from the president himself — to fulfill campaign promises like battling opioid addiction and transforming health care for veterans. White House press secretary Sean Spicer said Monday that it would “apply the president’s ahead-of-schedule-and-under-budget mentality” to the government.

But others inside and outside the White House cast doubt on the task force’s significance and reach, suggesting it was a lower priority for the administration and pointing out that similar measures have been tried by previous presidents with middling success. The assignment revived lingering questions about whether Kushner had opted to focus his time on a project that would put him at some distance from some Trump’s more conservative and controversial policy overhauls.

The announcement came just days after Kushner and his wife, Ivanka Trump, were photographed on the ski slopes of Aspen, Colorado, as the GOP health care deal began to unravel amid protests from conservative Republicans that it did not go far enough in replacing President Barack Obama’s Affordable Care Act. Kushner rushed back to Washington on Friday but it was too late to save the bill, which was scuttled hours later by House Speaker Paul Ryan.

Two people close to Kushner vehemently denied the president was upset at his son-in-law for being absent, saying Trump had given the trip his blessing. And a senior White House official insisted the timing of the task force announcement was planned weeks in advance.

Kushner, who has been at his father-in-law’s right hand since the campaign, has long been viewed as a first-among-equals among the disparate power centers competing for the president’s ear. Kushner, who routinely avoids interviews, draws power from his ability to access Trump at all hours, including the White House residence often off-limits to staffers.

His portfolio is robust: He has been deeply involved with presidential staffing and has played the role of shadow diplomat, advising on relations with the Middle East, Canada and Mexico. Though Kushner and Ivanka Trump have been spotted with some frequency on the Washington social circuit, the president’s son-in-law is routinely in the office early and leaves late, other than on Fridays when he observes the Sabbath.

While those close to Trump flatly state that Kushner, by virtue of marriage, is untouchable, this is a rare moment when he has been the center of the sort of political storm that has routinely swept up the likes of White House chief strategist Steve Bannon, chief of staff Reince Priebus and senior counselor Kellyanne Conway. It points to a White House whose power matrix is constantly in flux.

Kushner has been closely allied with senior counselor Dina Powell and National Economic Council director Gary Cohn, the former Goldman Sachs executive and a registered Democrat. That group has, at times, been at odds with conservatives led by Bannon, who to this point has been the driving force behind the White House’s policy shop.

When Kushner officially joined the administration in January as a senior adviser, it was suggested that the real estate heir would draw upon the private sector to streamline and modernize government. His task force has been meeting since shortly after the inauguration and started talking to CEOs from various sectors about ways to make changes to entrenched federal programs.

“Jared is a visionary with an endless appetite for strategic, inventive solutions that will improve quality of life for all Americans,” said Hope Hicks, Trump’s longtime spokeswoman.

A list supplied by the White House of some of those who have met with Kushner reads like a who’s who of the American business world, including Microsoft co-founder Bill Gates, Tim Cook of Apple and Jamie Dimon of JPMorgan Chase. Kushner usually does more listening than talking in the meetings, largely avoiding ideological arguments while asking questions about efficiency and best practices, according to a person who has attended a gathering but is not authorized to discuss private conversations.

But the Trump team is hardly the first seeking to improve how the government operates. The Reagan administration tasked the Grace Commission in 1982 with uncovering wasteful spending and practices, while the Clinton administration sought its own reinvention of government in 1993 with what was initially called the National Performance Review. Previous commissions have not produced overwhelming results in changing the stubborn bureaucracy, casting some doubt on what Kushner’s team can accomplish.

Philip Joyce, a professor of public policy at the University of Maryland, said the domestic spending cuts in Trump’s budget blueprint suggest that this new committee would most likely focus more on shrinking the government than improving its performance.

Even then, any change would be unlikely to deliver significant budget savings compared to reforming entitlement programs such as Medicare and Medicaid.

“It’s not the main thing we ought to be focusing on,” Joyce said. “It’s at the margins of the big issues facing the country, certainly in terms of the budget.”