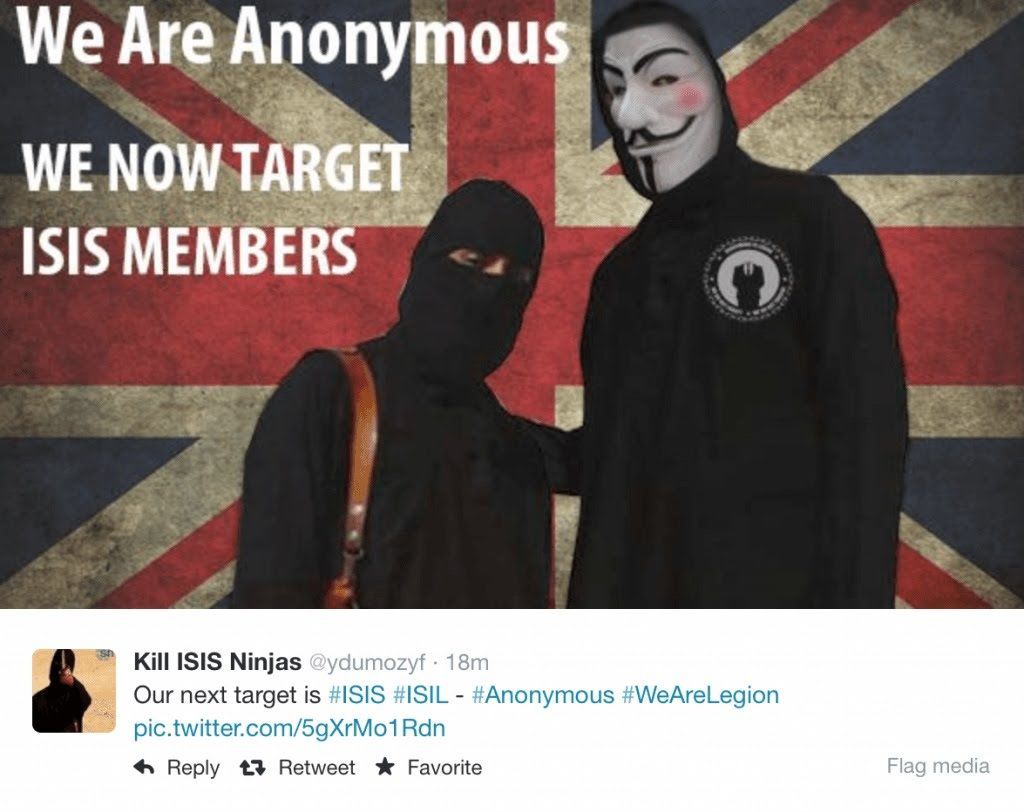 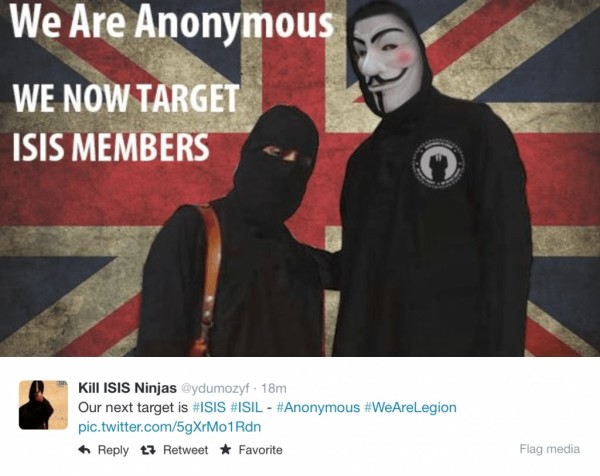 What happens when an unstoppable force encounters an immovable object? They trade banter. When the dreaded hacktivist group Anonymous openly declared war on ISIS (Islamic State) in the wake of the horrible terrorist attacks on Paris, the ever-defiant terrorist group called Anonymous a bunch of idiots, implying that they cannot be stopped by a bunch of computer-savvy individuals.

‘What they gonna hack…all they can do is hacking Twitter accounts, emails, etc… Do not make your email same as your username on twitter this mistake cost many ansar [users sympathetic to ISIS] their accounts and the kuffar [non-Muslims] published their IP, so be careful.’

The term idiot is one of many that refers to persons that are intellectually disabled but in modern use simply refers to stupidity. Both groups consider the other as a bunch of idiots, despite their activities requiring high levels of intelligence. Both groups have so far managed to keep themselves hidden from authorities, only exposing themselves when announcing and/or performing their activities. That requires a lot of technical skill and cleverness. ISIS is known to be keeping under the radar and uses the internet to recruit new members, convincing known decent individuals to become sadistic religious zealots. Anonymous is an ideological hacking group that uses their high-level hacking skills to disrupt governments, businesses, groups and individuals that do activities or dictate policies that are contrary to the well-being of the general population. Both groups have proven themselves capable of carrying out their threats. Being intelligent and capable, both groups can hardly be called idiots. The difference between these groups is that ISIS members don’t always live to fight another day.

But the term idiot also technically includes people who act in self-defeating and counterproductive ways. Individual members of ISIS, who blow themselves up, can hardly be called productive and self-defeating for them, would be an understatement. Anonymous, as with most vigilante groups, acting outside proper channels can also be considered counterproductive. Instead of stating their grievances to the authorities or assisting them or suing the pants off those who aggrieve the people, they use hacking to punish public or private entities and/or expose them by illegally hacking into their systems. But that’s how it is with vigilantism, if the law is too slow, can’t or won’t do something, we will. In both groups’ point of view, however, they’re producing results.

Anonymous has tracked down over 5,500 Twitter accounts and shut them down and has also produced several names of suspected ISIS members and supporters. Like they said:

‘You should know that we will find you, and we will not let you go. We will launch the biggest operation ever against you. Expect massive cyber-attacks. War is declared. Get prepared.’

The problem here is they gave the dirty kuffar what to look for if Anonymous didn’t know already. Both Anonymous and other government agencies basically know these tricks. But there are those in the Ansar who slip and those potential Ansar, who have to be confronted first on regular channels to convince them to join the cause, therefore still traceable if one knows what to look for. The NSA can now do their real jobs and monitor everyone on Telegram. So who’s the idiot now? But for regular people, these tricks are also handy in keeping their lives private from Big Brother, Thanks ISIS.

But the thing is, killing innocents for the sake of religion is hardly the act of an intelligent person, a sane one for that matter. That holds true at least in the modern world and modern society. In modern standards, killing a bunch of innocent people in a concert, in a restaurant, in a school, killing innocents, not of the same religion is what’s idiotic.

It’s difficult to argue with religion, though, as for thousands of years, all religions, demanded the blood of both followers and enemies alike, until collective knowledge and reason minimized the blood flow. Unfortunately for us, that type of religion seems to be coming back, and it’s up to a bunch of “idiots” to keep this from happening and expose the real idiots to the authorities.