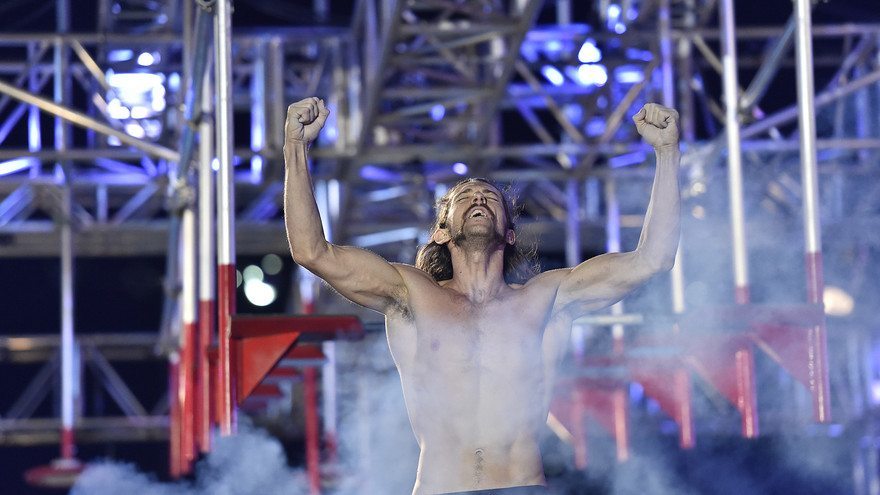 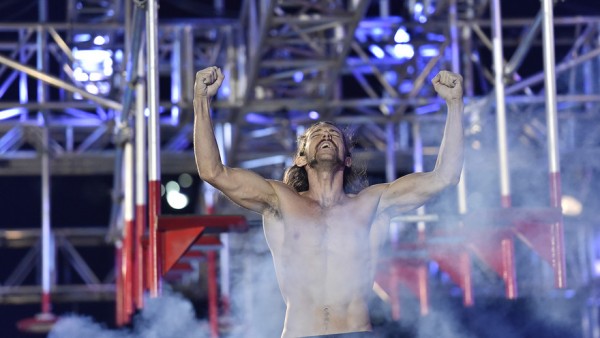 The WWE could not have scripted a better finale for the season finale of American Ninja Warrior. Like me, most fans of this show probably thought the season would end like the previous six….no idea what stage four even looked like, and certainly no million dollar winner.

The three hour finale started out with 38 runners who survived stage one of the finals. Most of the athletes that had been so dominant, met their match at stage two.

Daniel Gil attacked the course as he had done on his prior runs, but the Roulette Wheel was too much. That obstacle was the demise of most of the runners. It was a tough transition from one wheel to the next if you didn’t go with your momentum on the first rotation.

One of my favorites, Dustin McKinney had a disastrous run as he was eliminated just six seconds into his try. Grant McCartney had the most emotional exit as his kid brother absolutely sobbed after he hit the water. Grant said his nerves got to him a bit. Lots of lights, fire, and fans going crazy. I get it.

Finally a runner passed the Roulette Wheel. Ian Dory had a hell of a run and even got an awkward hug out of Kristine Leahy. He moved onto stage three. Brian Arnold wasn’t so lucky as he failed to seize the moment on the Roulette Wheel and hung in no man’s land on the first wheel.

Travis Rosen, Crazy Craver, and Ryan Stratis all got served by stage two.

One of the coolest ninjas ever, Flip Rodriguez got knocked out as he missed the landing from the Roulette Wheel. You could tell how hurt he was after he was beaten by the course.

Isaac Caldiero made stage two look easy as he flowed right through. He said he was trying not to take the course too seriously this year and I think that’s what propelled him.

Jeremiah Morgan joined Isaac on stage three as did Kevin Bull. Abel Gonzalez made it past stage two along with my favorite to win going in, Geoff Britten.

Brent Steffensen was not so fortunate as he wiped out on the Unstable Bridge. Drew Drechsel made it through and of course the baddest weatherman on the planet made it to stage three also, Joe Moravsky.

Stage two was tough, but stage three was a real bitch and had never been conquered on ANW. That was about to change as eight ninjas were left to face stage three in Las Vegas.

Abel Gonzalez was not going to make history. This good guy got evicted from Vegas at the Ultimate Cliffhanger. Good thing stage three was untimed or else no one would have had a shot.

Kevin Bull fans got disappointed when he exited on the Cliffhanger also. Ian Dory made it past that point so smoothly, but missed on one of the last cradles at the Flying Bar.

Then came Isaac Caldiero who was supposedly built for stage three. That was his own proclamation, but it turned out to be true. He went legend as he made it all the way past stage three and waited for the last couple of runners to see if they could join him. This world class climber was a perfect fit for three.

Jeremiah Morgan and Drew Drechsel didn’t have what it took on this night as they were bounced. Joe Moravsky would have made it to stage four in my view had he not tried to do the ledge leap on the Cliffhanger without turning to face the leap.

Up next was Geoff Britten, he of coconut forearms. He breezed through the early parts of the course with his super grip and powerful upper body. He did show he was human when he tired out at the end on the Flying Bars. He was hanging on by his fingertips on the last bar as he leaped to the platform and crawled to the end! Epic run and he would join Caldiero on stage four in a race to win a million dollars. No pressure right?

Two ninjas, one rope, 75 feet in the air. 30 seconds to becoming a millionaire (before taxes :). I guess the course creators ran out of cool obstacles and just said, “Hang a giant rope, give em half a minute to reach the top. No one’s ever gonna get this far anyways.”

The simple obstacle was still scary looking. Most humans could not climb such a rope if you gave them 30 days, much less 30 seconds.

Britten was first up. His upper body strength gave him the edge over Caldeiro I thought, even though Isaac was an epic climber.

Geoff exploded up the rope like a spider monkey, but did slow a bit at the top. He reached the buzzer with .35 seconds left! He became the first American Ninja Warrior in history with that climb. The million dollars was his as long as Isaac didn’t snatch it from him. I can imagine Geoff was planning all the ways to use that cash right then and there.

That’s what most people would be doing. Planning a trip to the bank to pay off their house, starting a giant college fund for their kid, and mentally crafting a resignation letter to the bossman. 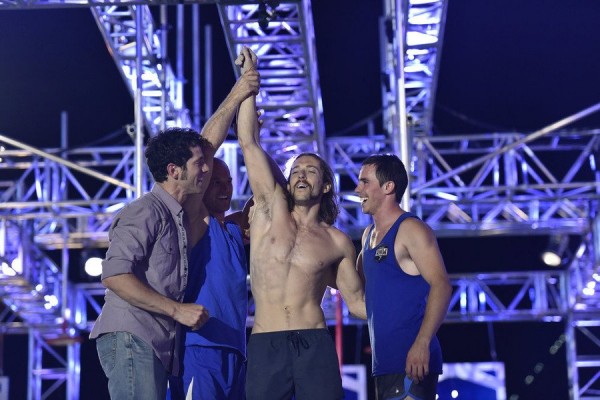 Caldiero wiped away any big money plans Geoff had come up with as he exploded up the 75 foot rope at stage four. One of the top climbers on the planet and what does he have to do to get $1,000,000? Climb like hell!

That’s just what he did, reaching the top of the rope to hit the buzzer in just over 26 seconds, ripping the million dollars from Britten, just like that. The two men had a nice hug after the fact which was cool and on point with the spirit of ANW.

Seven years in the making, two unbelievable athletes reached the pinnacle of American Ninja Warrior. Geoff Britten and Isaac Caldiero had lots of people behind them as they made history. Their success was built on hard work, a bit of luck, shear will, and also the experience of warriors who had gone before them.

It took seven years for someone to conquer all four stages on ANW, but those first six seasons weren’t failures. The ninjas that came close in years past paved the way for the two men in 2015. All the American Ninja Warriors learned by watching others, training with groups, and pushed each other past the limits of seemingly impossible obstacle courses.

It was the ninjas as a community that conquered Vegas. 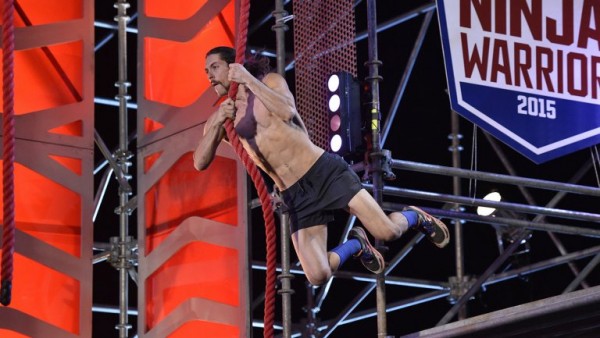 I wish both guys could have had the million dollar prize since it was so hard to get. But Caldiero beat the course and Britten’s time fair and square. I don’t know how much different Caldiero’s life will be now that he’s rich. Dude lived a very free life beforehand. I do imagine he will quit his bus boy gig though.

I had a blast covering this amazing show in 2015 and  look forward to next season. I bet Geoff will be back and surely Caldiero will return to defend his title as American Ninja Warrior.

The prize money should end Caldiero’s career as a busboy and working odd jobs to support his rock climbing and ninja training, Caldiero tells MarketWatch, but he insists he won’t be adventurous with his newfound wealth. “You’re not going to see us driving around in a brand-new Ferrari,” Caldiero says. “I’m going to be smart with the money and invest it.”

Though he wouldn’t get into specifics, beyond saying he’s still talking to trusted friends in the financial industry, Caldiero suggests he’ll be far more risk-averse in stocks than he is on rocks.

Though it’s more money than he’s ever seen, after taxes he won’t exactly be a millionaire, Caldiero notes. But other than the $3,000 he owes on his Subaru, he doesn’t really have any debt. So he plans to share his winnings with his family, replace the motor on his 1978 Dodge Jamboree RV, and invest the rest to support an ascetic lifestyle centered on traveling and climbing across the country with his girlfriend.

“For the past six years, my girlfriend and I have lived on less than $10,000 a year,” says Caldiero, who has had “home bases” in Utah and Nevada. “There have been times I’ve had less than $20 to my name — there were times I’d eat cereal and water for breakfast and live on ramen noodles and potatoes, and sleep in the front seat of my car or in the RV.”

Caldiero says he’s learned to strategize with his limited means. “Who needs all that consuming, anyway?” he asks. “It’s a lot of sacrifice, but it’s worth it to have the ultimate freedom we have.”

Aside from climbing and traveling, Caldiero says he’d also like to work to increase awareness of the ninja sport. Along with rock climbing, parkour and ninja gyms have surged in popularity as people search for fitness alternatives to more traditional workouts.

Pressed to name one item he might splurge on, Caldiero concedes he’s long overdue for some new clothes. “I might buy myself a nice shirt,” he says, which may surprise fans who’ve only seen him topless on the show.