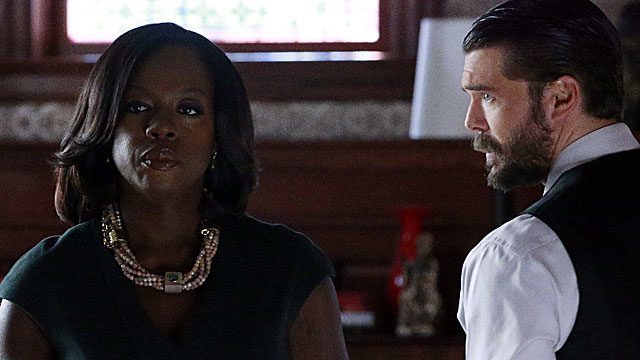 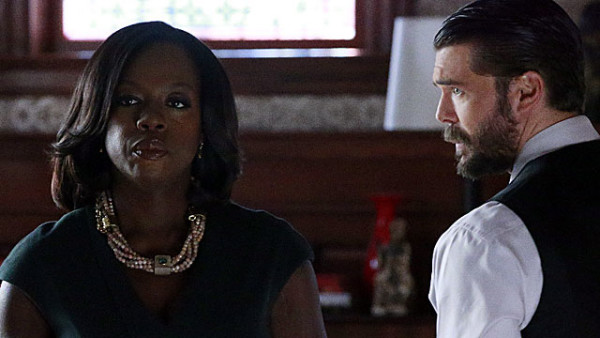 How to Get Awa With Murder is back confusing us, in a good way, though with ‘I Want You To Die.’

Nate cleans out his wife’s hospital room, and while he does, he is served papers. ADA Sinclair is claiming foul play on his part (so that he can be with Annalise she is saying).

Back at the house, Frank tells Annalise and lets her that he can protect them. She tells him, “If you want to protect us kill Emily Sinclair.” Come on Annie, you know Frank is cray, cray.

She leaves to see Eve, who calls a meeting with her and Nate. He confesses that he did give his wife the pills. Eve tells them, “Don’t worry, I got this.”

Bonnie gives Asher the cold shoulder and throws Trotter Lake in his face when he asks what’s wrong as she heads out to join Annie in court. Later he gets a chance to explain himself, but she still does not want to hear it. We find out that Trotter Lake was a party he threw at his parent’s house. Four guys took the victim, Tiffany, upstairs, but Asher was too drunk to know what was happening. His dad is the one who covered it up, but that’s bull to Bonnie because he “didn’t stop him.”

On this week’s case, Annie deals with a man who allegedly killed his ex-wife’s (Sharon Tidwell) husband, Marco. As Annalise leaves the courthouse to prep for trial, she sees ADA Sinclair. Annie confronts her and lets her know,

“You’re messing with the wrong bitch,” Sinclair asks her if that’s a threat. Annie’s reply?

Then she drops the mic on the bitch, or, well she walks away from the bitch.

Frank and Laurel get it on in the house and are caught by Annalise. Bam! She tells them and the rest of the team to get info on this week’s case and gives Laurel a hard time, making her look pretty stupid. The Keating Five get on it and finds that Marco was an alcoholic who attended AA three times a week at a church. During the trial, Annalise badgers the Sharon but that’s okay because the prosecutor has Marco’s 911 call and enters it into evidence.

At the house, Connor is taken aback that sexy ass Frank has asked Oliver to help on the case. Frank tells him to chill, “He’s not my type.”

Annalise meets with Eve in her car who confesses that she’s glad Nate killed his wife because that gave them the chance to see each other again. Um okay. They joke about throwing the case so Nate goes to jail and they live in Paris working their practice. But alas, it’s only a dream.

In court, Eve represents Nate in the pretrial to determine if he should be charged in his wife’s death. It gets heated as the nurse who tended to his wife takes the stand. Sinclair’s line of question leads her to outburst that it should be legal for someone to give their loved one pills to end their life. During Eve’s turn to cross-examine, she hesitates for a second, and when the judge asks her if she wants to, she says “no.” West, who sat in the courtroom, runs home to tell Annie that they are going to test Nate’s wife’s blood, and he thinks Eve threw the case. Guess she was thinking about Paris.

Annalise rushes to meet with Eve, and she tells her that she did not throw the case. She asks her to trust what she is doing and that Nate knows that plan. That’s all that matters.

Laurel gets a hunch that the prosecutor and Sharon Tidwell are sleeping together after seeing their interaction at the courthouse. She investigates by going to his building and claiming to be a friend of Sharon’s or something like that.  The doorman tells her that she doesn’t live in the building but is there all the time, proving Laurel’s hunch.

The next day in court, Annie calls the prosecutor to the stand and questions him about his relationship with his client. At the same time, Laurel talks his doorman into coming with her into the courtroom. Once he’s in, he can’t leave as he can attest to Mrs. Tidwell and the prosecutor’s relationship. Annalise eventually gets the prosecutor to plead the fifth when asked if he is the one who drove Marco to kill himself.  Go Laurel.

Nate and Eve sit in her car as they wait outside his wife’s hospital, and he asks, “What’s your deal with her?” Awkward. She avoids the question, and he goes in to speak to the nurse.

What we ascertain from the fact that Eve wins the case, is that he asked his wife’s nurse to fix the blood results. And she did. West questions Eve afterward and she doesn’t give him anything. But what he does give her suspicion about her homie, lover, friend.

In a quest to make amends with Bonnie, Asher goes to her house, but all he does is tell on Annalise and her showing him Bonnie’s video.

In Eve’s hotel room, she asks Annie about West, and while she doesn’t really give an answer, Annie tells her, “It’s him.” Then, the old “friends” share a drink, a kiss and a night in bed.

At the Keating House, Oliver’s fake online dating profile (he used Connor’s picture) catches the eye of the guy they suspect is the Hapstall killer, and because his boyfriend doesn’t want to lure him in, Ollie offers to, to Connor’s consternation.

Of course, Connor doesn’t let him and goes himself.  Only their plan is foiled because Laurel calls Annalise, who gets a hold of Frank before the guy shows up and shuts it down. We find out he was never going to show up because instead he ambushes Ollie in his apartment.  “Hi, how is your night going?” Psycho!

Annalise makes it home after her sexy night, and Bonnie waits for her. She confronts her about telling Asher about her past. Annie tries to reason with her, but Bonnie does not take it and tells her that she ruined her. They have a shouting match, and Bonnie accuses her of hurting her on purpose and not loving her. Annie tells her she absolutely loves her, but Bonnie is through with her.

It is clear that there are a lot of people who want to take Annie out and we only a few more episodes to find out before the winter finale.