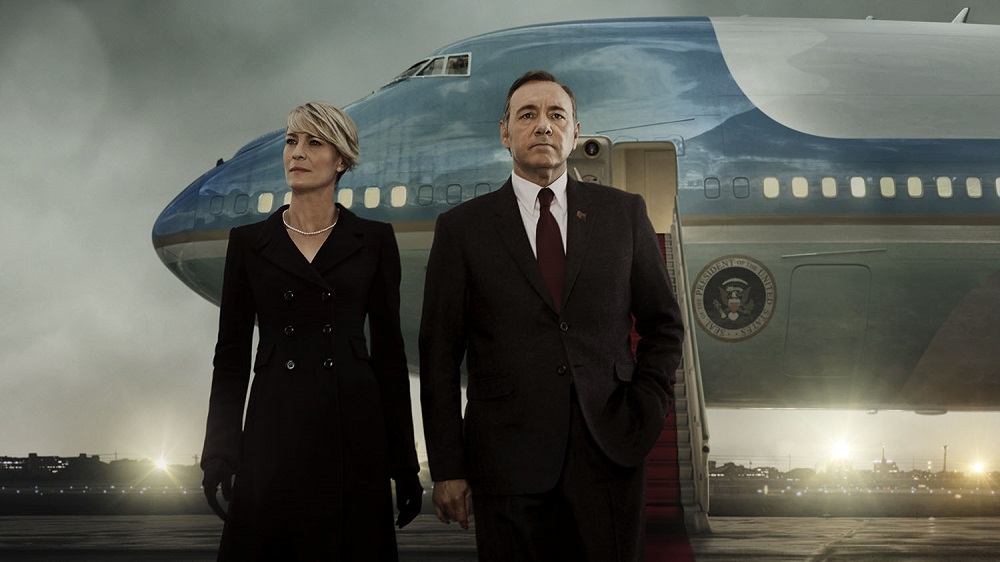 As House of Cards Chapter 43 opens, Doug and Seth advise the President about his chances if he lets Claire run as his VP. Slim to none is Seth’s assessment, but Doug tells him to do his job and make it work.

Doug then tells Frank privately that Seth is right. A First Lady has never run as a VP candidate for a reason.

Frank and Doug know how to go around problems if they can’t fix the main issue. Since Claire can’t be forced out of this idea, they try to get Leann on their side with a sweet deal to run Frank’s campaign.

Leann is clearly enticed by the offer over the phone from Doug but wants to show the President her research that should convince him he’s wrong about Claire as a running mate.

Heather Dunbar makes an ill-advised move by contacting her friend, the Attorney General, about her meeting with Lucas. The AG won’t touch it with a ten-foot pole, and now Dunbar has confided in a person working directly for her opponent.

Dunbar’s entire team must have been drunk this episode. Cynthia Driscoll let the Attorney General topic slip out to Seth at their bar meeting.

Then she tells Seth about Lucas (dead man walking) being out of prison!

The funniest scene of this season came after Leann dropped the divorce letter on Frank with Doug standing by. She heads off to the airport afterward and Frank, shocked at this move, tells his right-hand man, ” We have to stop her.”

“Before she gets to the airport?” Doug asks.

“No I mean Claire,” Frank corrects Doug, who’s chomping at the bit to murder Leann. I laughed out loud!

Claire finds out just how powerful her husband is when she’s put on lockdown with no contact to the outside world. Secret Service tells her it’s due to a threat against her life.

Always good to at least appear sympathetic to those who oppose you.

You could end up getting gut shot by a former reporter who’s life you ruined. That’s exactly what happened to Francis Underwood as he acted like he cared about what the protesters were saying to him.

Lucas managed to shoot the President and Meechum before the heroic Secret Service agent killed Mr. Goodwin. No more Presidential threesomes for Meechum though. No more anything actually. He died on the scene and was barely attended to by everyone else who totally focused on the fallen POTUS.

Not a good plan to go JWB on a President, but Lucas was at the end of his rope.

I loved the news reports of the assassination attempt as the anchor described the event moments after it happened without having any solid information. Very similar to a car chase with local anchors making random guesses to the facts….like Anchorman 2.

Even better than the news reports was Claire’s mom who told her daughter, “I hope he dies!” Way to go Ike Clanton!

Claire was likely pretty stoked as well though she didn’t let it show of course.

The First Lady is needed by VP Donald Blythe, so she heads off to support him as he’s sworn in as the most inept President in half a century. It would be safer to let Doug run the damn country until Frank can heal up. Or Claire. Or Remy. Or Jackie. Or Freddy from the rib shack….

Blythe’s hand is trembling as he signs the order locking him in as QB1 of America.

Seth was stern with the media as he gave the dire updates on Underwood. I expected him to say, “In addition to the shooting, the VP suffered a heart attack moments after being sworn in, and Doug Stamper was commissioned to finish the job on Blythe to ensure he never takes a single action as POTUS.”

The news is pretty bad for Frank. Liver jacked. A six-hour surgery. A wife by his side that could smother him if she wanted.

And the country is in the hands of Donald. I thought he was gonna puke when he learned he had to deal with Russian President Petrov.

Lucas Goodwin’s identity was found out by the media and his real name released. Some privacy the witness protection organization provides. Maybe get the guy to change his hair or something once he’s back in society.

Doug makes the mistake of asking Claire for help with Donald with the Russian drama. The weak interim President says there’s “so much he doesn’t know” about the situation.

What does this guy do all day?

He is second in command! No job except to help run the country. Not like he’s working part time at the post office to make ends meet. It’s his job to know! 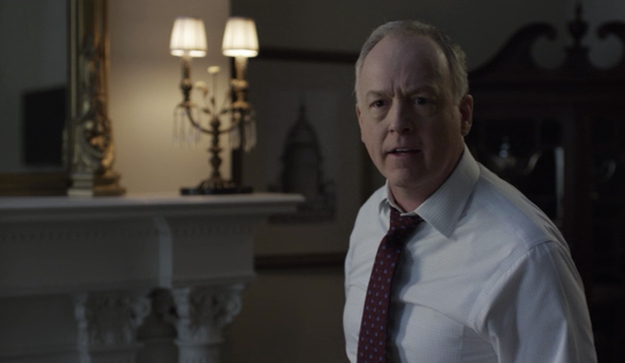 With Donald being an easy puppet, Claire has her way with him. He has no chance against the seductive First Lady who appears earnest in her efforts to help him deal with Petrov.

Her idea is one of Frank’s favorite sayings.

“Turn the table over when you don’t like the way it’s set.”

Donald agrees and the military advisers, along with Doug, are shocked at his plan to let Milkin land in China. They see no reason to take this drastic measure, but he spells out how it could work.

All that reasoning is coming from Claire obviously. She has more power at this moment than ever before.

Maybe we’ll see her and old Donald hook up in episode 5. That would be awesome!

House of Cards wisely chose Donald Trump‘s inauguration day to drop the Season 5 release date which is May 30, 2017.