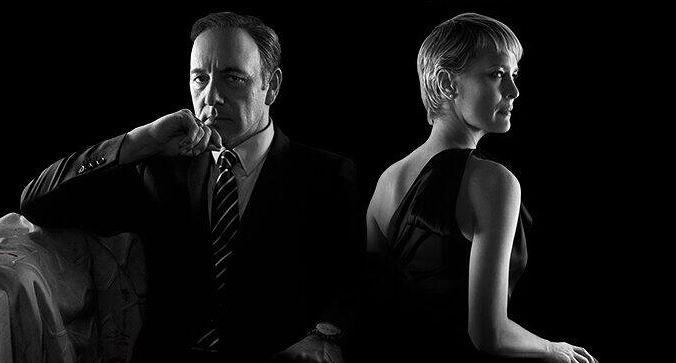 Can “House of Cards” Lucas Goodwin be content vacuuming cars out for a living? Doubtful. The open of episode 3 shows our former reporter and newly freed witness protection member checking out the political headlines in the paper.

Let it go Lucas! At the very least, you’re out of that cage.

Frank is a chameleon that can fit in anywhere. He’s rallying the black community in his hometown of Gaffney, South Carolina with Doris and Celia Jones in attendance.

We got a look at Frank practicing his speech before the church event. It was awesome watching this man craft his words perfectly to get the desired effects on the crowd.

The whitest guy in the room had the black congregation eating out of his hand. Frank Underwood knows how to connect to people.

The war between Claire and her mom continues. Another war over gas is brewing as well, and $7 / gallon is a real possibility. That could lead to riots according to Underwood’s staff.

Frank sees the effects of the gas problem as his convoy passes a station with folks waiting in long lines to fill up their cars.

What the hell was Leannn taking photos of in that safety deposit box and who did the box belong too? More on that later, but it was weird to see her take her earrings out and place them in the box before leaving.

Were they Frank’s mom’s? The ones Claire wore to the SOTU?

Had to be, right?

Don’t keep things around you want to stay private, no matter the motivation.

This Leann Harvey has entered the season throwing haymakers. She hires Oren Chase to do a dirty deed intended to harm Frank’s campaign.

Chase is the county administrator that tried to take Frank’s congressional seat in season one. Chase had the tables turned on him of course and now hates Frank with a deep southern passion.

What’s Lucas up to? Well, he has to sell his body to a co-worker at the carwash for his help with getting a car to get away from his home prison. Every aspect of Lucas’ life outside prison is about the same as when he was locked up. Just a new address.

How is Frank dealing with Petrov over this refugee Milkin? POTUS decides to protect the guy since the Russian leader thinks Frank is involved anyway. Seems risky, but Petrov is not an easy guy to deal with when going in honestly.

Although this may be a bad time to try dangerous strategies since Frank appears to be losing it a bit, having more visions of his fight nightmare with Claire. He also sees blood running out of his faucet.

If you thought Claire was gonna play the good wife after Frank destroyed her bid for office in Texas, you underestimated her cunning. She’s busy warming up to Frank as they share their old bed in their first humble home. 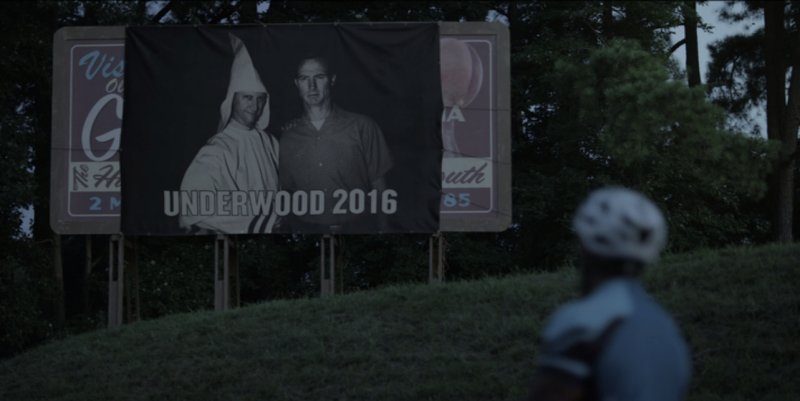 Oren Chase did a great job for Leann. The project? A billboard covered with an old photo of Frank’s daddy with a member of the KKK. Not a good look for the sitting President of the United States.

Not a good look for the President of the PTO or any other group you can name!

Doug believes Seth is leaking this shit, but he’s wrong.

It turns out that the safety deposit box was Frank’s, and he is out of his mind pissed once he sees the news of the billboard.

Doris and Celia head back to Texas and won’t entertain Frank’s idea of standing by his side as he tries to explain this photo away.

While Frank deals with this racist mess, Lucas has infiltrated a Dunbar meet and greet. He steals a press pass and somehow gets a moment with Cynthia Driscoll, Dunbar’s campaign manager.

That leads to Lucas getting a very private face to face with Dunbar herself.

Dude is making progress, but Dunbar’s love for justice is outweighed by her ambition to win the Presidency. She leaves the guy hanging, sobbing in the stairwell.

Dunbar wasted this chance to hurt Frank and end his campaign with Lucas’ intel. You can bet your ass Frank would have never turned away a guy like Lucas if he could have used him to his advantage.

Doing damage control doesn’t help much as Frank is going to lose in his home state to Dunbar. He explained that his daddy had no choice but borrow the money needed to save the family farm from a banker connected to the Klan.

It appears that Seth does leak the photo of Frank at the Civil War re-enactment from season one. This leak nearly gives the Prez a stroke! 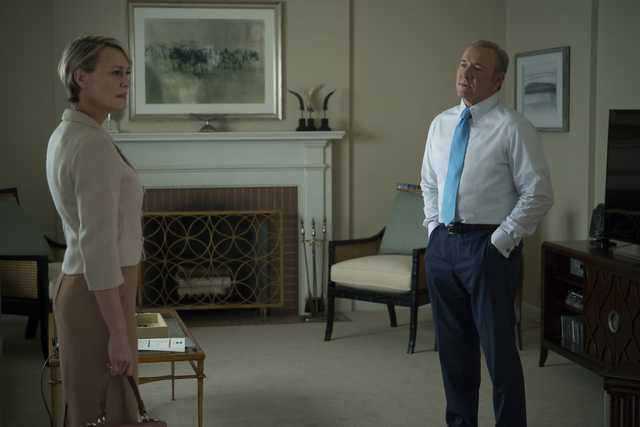 Claire returns the uppercut from the end of episode two when Frank opens up the returned safety deposit box to find his mother’s earrings there. Well played girl!

She’s as cold and calculating as her hubby and has her husband’s full attention.

I love how these two move forward when there is nothing that can be done about past events. No need for Frank to yell and scream at her.

Sharks move in one direction.

Claire’s plan is to be the Vice President. She has some strong arguments, but Frank sees the plan as insane.

He tells her it will never work, but she’s right about the impossibility of him winning without her.

“I prefer a spineless Donald Blythe to a woman who’s never held office,” Frank scolds her.

I wondered why a smart guy like the Prez would keep a photo of his dad with the Klan. He explained it to Claire as being the only moment he was ever proud of his dad. His father dealt with those despicable people so that he and his family could survive.

The show wrapped with Claire making it clear she could end Frank’s campaign to stay POTUS or be part of it.